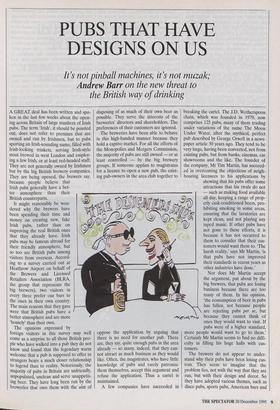 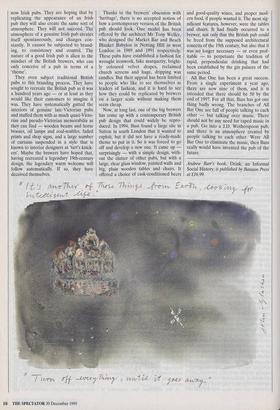 PUBS THAT HAVE DESIGNS ON US

It's not pinball machines, it's not muzak;

Andrew Barr on the new threat to

the British way of drinking

A GREAT deal has been written and spo- ken in the last few weeks about the open- ing across Britain of large numbers of Irish pubs. The term 'Irish', it should be pointed out, does not refer to premises that are owned and run by Irishmen, but to pubs sporting an Irish-sounding name, filled with Irish-looking trinkets, serving Irish-style stout brewed in west London and employ- ing a few Irish, or at least red-headed staff.

They are not generally owned by Irishmen but by the big British brewery companies.

They are being opened, the brewers say, because people believe that Irish pubs generally have a bet- ter atmosphere than their British counterparts.

It might reasonably be won- dered why the brewers have been spending their time and money on creating new, fake Irish pubs, rather than on improving the real British ones that they already have. Irish pubs may be famous abroad for their friendly atmosphere, but so too are British pubs among visitors from overseas. Accord- ing to a survey carried out at Heathrow Airport on behalf of the Brewers and Licensed Retailers Association (BLRA, the group that represents the big brewers), two visitors in every three prefer our bars to the ones in their own country. The main reasons that they gave were that British pubs have a better atmosphere and are more `homely' than their own.

The opinions expressed by foreign visitors in this survey may well come as a surprise to all those British peo- ple who have walked into a pub they do not know and found that the legendary warm welcome that a pub is supposed to offer to strangers bears a much closer relationship to legend than to reality. Notoriously, the majority of pubs in Britain are unfriendly, unpopulated, unclean and serve unappetis- ing beer. They have long been run by the breweries that own them with the aim of disposing of as much of their own beer as possible. They serve the interests of the breweries' directors and shareholders. The preferences of their customers are ignored.

The breweries have been able to behave in this high-handed manner because they hold a captive market. For all the efforts of the Monopolies and Mergers Commission, the majority of pubs are still owned — or at least controlled — by the big brewery groups. If someone applies to magistrates for a licence to open a new pub, the exist- ing pub-owners in the area club together to oppose the application by arguing that there is no need for another pub. There are, they say, quite enough pubs in the area already — so many, indeed, that they can- not attract as much business as they would like. Often, the magistrates, who have little knowledge of pubs and rarely patronise them themselves, accept this argument and refuse the application. Thus a cartel is maintained.

A few companies have succeeded in breaking the cartel. The J.D. Wetherspoon chain, which was founded in 1979, now comprises 125 pubs, many of them trading under variations of the name The Moon Under Water, after the mythical, perfect pub described by George Orwell in a news- paper article 50 years ago. They tend to be very large, having been converted, not from existing pubs, but from banks, cinemas, car showrooms and the like. The founder of the company, Mr Tim Martin, has succeed- ed in overcoming the objections of neigh- bouring licensees to his applications by showing that his pubs offer some attractions that his rivals do not — such as making food available all day, keeping a range of prop- erly cask-conditioned beers, pro- hibiting smoking in some areas, ensuring that the lavatories are kept clean, and not playing any taped music. If other pubs have not gone to these efforts, it is because it has not occurred to them to consider that their cus- tomers would want them to. 'The harsh reality,' says Mr Martin, 'is that pubs have not improved their standards in recent years as other industries have done.'

Nor does Mr Martin accept the argument, put about by the big brewers, that pubs are losing business because there are too many of them. In his opinion, `the consumption of beer in pubs has fallen, not because people are rejecting pubs per se, but because they cannot think of ones they would want to visit. If pubs were of a higher standard, more people would want to go to them.' Certainly Mr Martin seems to find no diffi- culty in filling his huge halls with cus- tomers.

The brewers do not appear to under- stand why their pubs have been losing cus- tom. They seem to imagine that the problem lies, not with the way that they are run, but with their design and decor. So they have adopted various themes, such as disco pubs, sports pubs, American bars and now Irish pubs. They are hoping that by replicating the appearance of an Irish pub they will also create the same sort of atmosphere. They will not succeed. The atmosphere of a genuine Irish pub creates itself spontaneously, and changes con- stantly. It cannot be subjected to brand- ing, to consistency and control. The nature of a good Irish pub is alien to the mindset of the British brewers, who can only conceive of a pub in terms of a `theme'.

They even subject traditional British pubs to this branding process. They have sought to recreate the British pub as it was a hundred years ago — or at least as they would like their customers to imagine it was. They have systematically gutted the interiors of genuine late-Victorian pubs and stuffed them with as much quasi-Victo- rian and pseudo-Victorian memorabilia as they can find — wooden beams and horse brasses, oil lamps and coal-scuttles, faded prints and shop signs, and a large number of curtains suspended in a style that is known to interior designers as `tart's knick- ers'. Maybe the brewers have hoped that, having recreated a legendary 19th-century design, the legendary warm welcome will follow automatically. If so, they have deceived themselves. Thanks to the brewers' obsession with `heritage', there is no accepted notion of how a contemporary version of the British pub should look. One model has been offered by the architect Mr Tony Weller, who designed the Market Bar and Beach Blanket Babylon in Notting Hill in west London in 1989 and 1991 respectively. These pubs have established a fashion for wrought ironwork, fake marquetry, bright- ly coloured velvet drapes, reclaimed church screens and huge, dripping wax candles. But their appeal has been limited to people who like to see themselves as leaders of fashion, and it is hard to see how they could be replicated by brewers on a larger scale without making them seem cheap.

Now, at long last, one of the big brewers has come up with a contemporary British pub design that could widely be repro- duced. In 1994, Bass found a large site in Sutton in south London that it wanted to exploit, but it did not have a ready-made theme to put in it. So it was forced to go off and develop a new one. It came up surprisingly — with a simple design, with- out the clutter of other pubs, but with a large, clear glass window, painted walls and big, plain wooden tables and chairs. It offered a choice of cask-conditioned beers and good-quality wines, and proper mod- em food, if people wanted it. The most sig- nificant features, however, were the tables and chairs. It had finally occurred to a brewer, not only that the British pub could be freed from the supposed architectural conceits of the 19th century, but also that it was no longer necessary — or even prof- itable — to perpetuate the tradition of rapid, perpendicular drinking that had been established by the gin palaces of the same period.

All Bar One has been a great success. From a single experiment a year ago, there are now nine of them, and it is intended that there should be 50 by the end of 1997. For all that, Bass has got one thing badly wrong. The branches of All Bar One are full of people talking to each other — but talking over music. There should not be any need for taped music in a pub. Go into a J.D. Wetherspoon pub, and there is an atmosphere created by people talking to each other. Were All Bar One to eliminate the music, then Bass really would have invented the pub of the future.