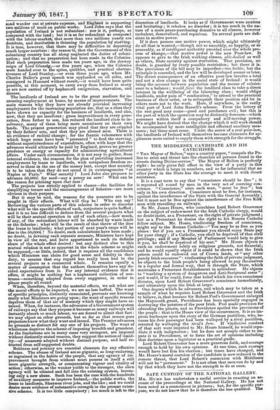 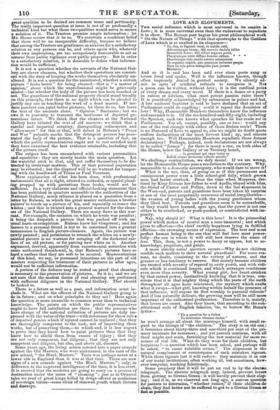 SAFE CUSTODY OF THE NATIONAL GALLERY. Mn. Huron has undertaken

a useful service in exacting an ac- count of the proceedings at the National Gallery.He-has not been noted as a connoisseur in pictures; but, for the specific pur- pose, we do not know that he is therefore the less qualified. The

great qualities to be desired are common sense and pertinacity. The really important question at issue is not of so profoundly a technical kind but what those two qualities would serve to secure a solution of it. The Trustees promise ample information : let Mr. Hume secure that it be so. We entertain a confident belief that there will be no insuperable difficulty, because we believe that among theTrustees are gentlemen as anxious fora satisfactory solution as any persons can be, and others again who, whatever their own impressions, are too scrupulously honourable to act as screens from public vigilance over public property. But in order to a satisfactory solution, it is desirable to define what informa- tion would be sufficient.

It is not a question whether the servants of the National Gal- lery are clever cleaners, but whether their operations are consist- ent with the duty of keeping the works themselves absolutely un- altered. It is not a question for the uninitiated, whether a certain picture " looks better" for being cleaned—that is " a matter of opinion," about which the unprofessional might be grievously misled—but whether the body of the picture has been touched or not. The guardians of the national property should stand broadly on this principle, that there is no right which can be pleaded to justify any one in touching the work of a dead master. If mo- dern painters can paint better pictures, let them do so, but leave the text of the ancients alone. " Opinion " fluctuates ; but we owe it to posterity to transmit the heirlooms of departed ge- nerations intact. We think that the cleaners at the National Gallery have vitiated the text of old masters: we think that a careful and impartial scrutiny, disregarding refinements and " allowances " for this or that, will detect in Rubens's " Peace and War " palpable marks that the detergent process has pene- trated the body of the picture. That is a question of fact, on which the public representatives ought not to rest satisfied until they have examined the best evidence attainable, including that of the picture itself.

. The subject has been encumbered with various personalities and squabbles : they are mostly beside the main question. Let the watchful stick to that, and not suffer themselves to be dis- tracted by irrelevant matters. This or that personal imputation may be rebutted ; but the disproof will be no warrant for tamper- ine with the handiwork of Titian or Paul Veronese.

ere explanation of what has been done, with professional testimonials that all is right, uttered ex cathedra, or special plead- ing propped up with quotations from books, would not be sufficient. In a very elaborate and official-looking statement that has been published in quarters accessible to the authorities of the National Gallery, much reliance is placed on a quotation from a letter by Ruben; in which the great master authorizes a brother painter to touch up a picture of his, and especially to renew the whites ; and this is twisted into a general warrant for the clean- ers of the National Gallery. There are many flaws in this war- rant. For example, the occasion on which he wrote was peculiar; it being the despatch a picture that was packed off with un- usual haste on completion. Rubens knew his vicegerent; and his licence to a personal friend is not to be construed into a general commission to English picture-cleaners. Again, the picture was newly painted ; and permission to retouch the whites on a newly-

picture is no warrant for scraping off the darkened sur- of an old picture, or for putting new white on it. Another argument, derived, apparently from experimental scratches with some authorized thumb-nail, is, that Rubens's pictures have so hard a surface that they are safe to be scoured. Representations of this kind, we say, or presumed intentions on the part of old masters respecting the treatment of their pictures in after ages, would not be sufficient information.

A portion of the defence may be rested on proof that cleaning is necessary to the preservation of pictures. So it is ; and we are not sure that the modest duties of real cleaning are performed with sufficient diligence in the National Gallery. That should be looked to.

There is a future as well as a past, and information must in- clude it. What are the officers of the National Gallery going to do in future ; and on what principles do they act ? Here again the question is more amenable to common sense than to technical knowledge. The points on which the public representatives ought to have full satisfaction are these : that the persons who Dave charge of the national collection of pictures are duly im- pressed with the value of the trust—with reverence for those relics of departed genius which if injured cannot be replaced ; that they are thoroughly competent to the task, not of improving those works, but of preserving them,—to which end, it is less cogent to prove that they know how to paint pictures than that they know how to shield them from causes of injury ; that they are not only competent, but diligent ; that they are not only competent and diligent, but also, and above all, discreet.

Some years ago, the living artists entered into a paper crusade against the Old Masters, who were nicknamed, in the cant of the new school, " the Black Masters." Taste was perhaps never at a lower ebb in England than it was at that time. There are now eign' s of a new crusade against "the Black Masters "; only, in deference to the improved intelligence of the time, it is less overt. It is averred that the moderns are going to carry on a process of destruction under the name of " cleaning " ; just as in Oriental tales we read of great kings killed by drugs offered as medicines of sovereign virtue—some elixir of renewed youth which distorts and destroys.