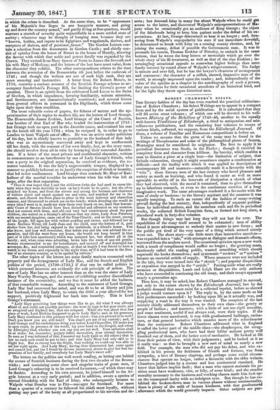 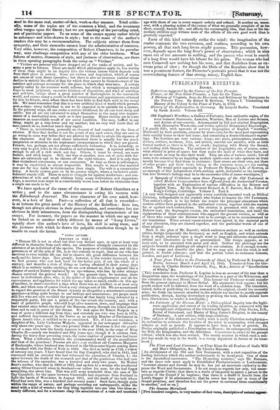 We have spoken of the cause of the success of Robert Chambers as a writer ; and to the same circumstance is owing his success with the Edinburgh Journal. The true character of his own mind, how- ever, is a love of fact. Fact—a collection of all that is recorded— is at bottom the great merit of the History of the Rebellion : facts too, though not always obvious in their generalization, and sometimes but too obvious in their minuteness, form the distinguishing characteristic of his essays. For instance, the papers on the manner in which one age may be linked on to another widely different by means of "Long Livers," equally show this author's love of facts, his skill in using them, and the justness with which he draws the palpable conclusion though he is unable to reach the latent.

[WRITTEN 114 1833•7 " Human life is not so short but that very distant ages, or ages at least very different in character from each other, are sometimes strangely connected by the existence of an individual of the species. The progress of civilization, and the im- provement of all the arta of life, is in this country so rapid, that no one who has snrvived to even middle life can fail to observe the great difference between his early and his latter days. How greatly, however, is the wonder increased, when we find persons who can look back for the better part, if not the whole of a century, and describe a state of things as having obtained in their young days tehich is so entirely unlike anything we see now around us, that it appears like a chapter of ancient history narrated by an eye-witness, who has by some strange chance survived the general wreck! At the present time, for instance, there must be individuals alive, who, in the midst of all the enlightenment and all the conveniences and appliances for which the age takes so much credit—in this age of intellect, in short—recollect a time when there was no intellect, or at most very little, and when men of course lived a very strange sort of life. We are accustomed to regard the question of the Stuart dynasty as altogether a seventeenth-century question—a thing quite foreign to our feelings and associations: yet people must still live who not only recollect the pretensions of that family being defended by a respectable party, but saw a prince of the line invade the country, and, with a band of primitive people, who still kept alive manners, dress, and language that had existed since before the days of the Romans, sweep through the island almost from end to end in quest of the throne. We look upon Sir Robert Walpole as a man of quite a different day from this; and certainly one who was born in 1676, and suffered imprisonment in the Tower as an unruly Member of Parliament in Queen Anne's time, is entitled to be so considered. Yet, if I am not mistaken, a daughter of his, Lady Catherine Walpole, appeared in our newspaper obituaries only about two years ago. Our own present Duke of Montrose is but the grand- son of a man who bore the family honours in the year 1684, in the reign of King Charles IL—nearly one hundred and fifty years ago; though it is curious that, during the thirty-four preceding years, the same number of generations had borne them. What a difference between the circumstantial world of the grandfather and that of the grandson ! Persons yet alive may recollect old Countess Margaret of Roxburghe, whose husband was drowned in the Gloucester frigate coming down to Scotland with the Duke of York in 1682. She died so lately as 1758, a widow of seventy-one years. 1 have heard that Sir play Campbell, who died in 1811, had conversed with an ancestor who had witnessed the execution of Charles L: the space between the death of the monarch and that of the gentleman who had seen the witness of his execution, was a hundred and sixty-two years. Sir Walter Scott's mother who died in 1820 or 1821, had spoken to a woman who recollected lacing Oliver Cromwell when in Scotland—or rather his nose, for she had forgot everything else about him. This was still more wonderful than the case of Sir Bay Campbell; for the space between Cromwell's last departure from Scotland to fight the battle of Worcester, in August 1651, and the death of the lady whose friend had seen him, was a hundred and seventy years ! Such facts, though quite within the range of nature, and perhaps occurring not infrequently, strike the mind with a kind of wonder; for they bring together into one idea two ideas re- motely different, and for a moment clasp the associations of a rude and unsettled age with those of one in every respect orderly and refined. It soothes us, more- over, with a pleasing notion of the extent of what we generally complain of as too short, namely, human life; and affords the encouraging idea, that man or his im- mediate children may witness more of the effects of his own good work than is generally expected?'

Facts of this kind naturally strike the mind : the imagination of the reader contrasts the two extremes, and realizes, according to his own powers, all that such long livers might possess. This possession, how- ever, depends upon the long liver's power of observation ; which in nine cases out of ten amounts to nothing, and the person who went in search of a long liver would have his labour for his pains. The woman who had seen Cromwell saw nothing but his nose, and that doubtless from an ex- treme point of view ; for though the libels of the Royalists show that it was a prominent feature, the Protector's portraits prove that it was not the overwhelming feature of that strong, massy, English face.