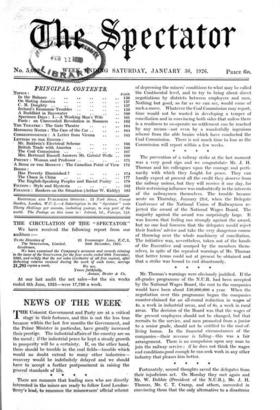 Page 1, 30 January 1926 — The prevention of a railway strike at the last moment
Close

The prevention of a railway strike at the last moment

was a very good sign and we congratulate Mr. J. H. .Thomas and his colleagues upon the courage and perti- nacity with which they fought for peace. They can hardly expect at present all the credit they deserve from the railway unions, but they will receive it one day, for their restraining influence was undoubtedly in the interests of the railwaymen themselves. The trouble became acute on Thursday, January 21st, when the Delegate Conference of the National Union of Railwaymen re- jected the award of the National Wages Board. The majority against the award was surprisingly large. It was known that feeling ran strongly against the award, but no one had foreseen that the delegates would reject their leaders' advice and take the very dangerous course of throwing over the whole machinery of conciliation. The initiative was, nevertheless, taken out of the hands of the Executive and usurped by the members them- selves, in spite of the repeated warnings of Mr. Thomas that better terms could not at present be obtained and that a strike was bound to end disastrously.