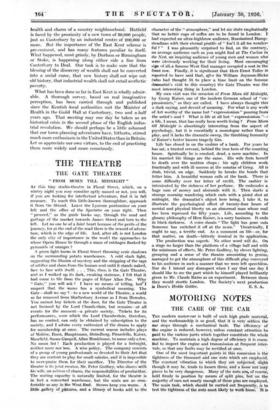 "FROM MORN TILL MIDNIGHT"

AT this tiny sttidici-theatre in Floral' Street, which, on a wintry night you may consider aptly named or not, you will, if you are looking -for intellectual adventure, find it in full measure. To reach. this little-known thoroughfare, approach it from the Strand. Leave the Lyceum pantomime on your left and the office of the Spectator on your right. Then "proceed," as the -guide books say, through the mud and garbage of the market towards James Street and turn to the left. Let no one be -of a faint heart because of the perils of the journey, for at the end of the road there is the reward of adven- ture, which is the edge of life. And, after all, is--not London the only city of importance in the world the approaches to whose Opera House-lie through a maze of cabbages Ranked-by pyramids of oranges ?

A green light burns in Floral Street throwing eerie shadows on the surrounding potato warehouses. A cold stark light, suggesting the illusion of mystery and the stripping of the rags of artifice and sham-from the human soul. until it stands naked, face to face with itself. . . This, then, is the Gate Theatre, and as I walked up its dark, creaking staircase, I felt that it had come to life from the pages of Edgar Allan Poe. Why "Gate," you will ask ? I have no means of telling. Wei suspect that the -.name has a symbolical meaning. The Gate—shall we say ?—to a new world of the Theatre, a world so far removed from Shaftesbury Avenue as I from Hercules. You cannot buy tickets at the door, for the Gate Theatre is not licensed by the Lord Chamberlain, but remains—at all events for the moment—a private society. Tickets for its performances, over which the Lord Chamberlain, therefore; has no control; can only be obtained by subscription to the society, and I advise every enthusiast of the drama to apply for niembership at once: - The' current season includes plays of Moliere, Ibsen, Ifauptmann, Strindberg,,Pirandello, Kaiser, Maseheld, Susan thaspell, Allan Monkhouse, to name only a few'. No mean list ! Each production is played for a fortnight, neither More nor less. A Wise policy. The company consists of a group of young professionals so devoted to their Art That they are content to play for small salaries, and it is impossible to over -praise them for their sacrifice. The Director of the theatre is its joint creator; Mr. Peter Godfrey, who shares' with liiswife;an actrese of charm, the respOnsibilities of production. The seating capacity is naturally limited; for the theatre is in fact a converted warehouse, but the seats are as com- fortable as any in-the West End. Stows keep you warm. A little gallery of 04. tures, ind a library of books add to- the character of the "atmosphere," and let me state emphatically- that no better cups of coffee are to be found in London. I had expected an ultra-highbrow audience; Russianized Hemp- steadians with their eternal prattle of "Isn't it all too wonder ful " I was pleasantly surprised to find, on the contrary, - an average audience such as you might find at The Cuckoo in the Nest, an inspiring audience of young Men and Women whO were :obviously working-for their living. Most encouraging - sign of all; a famous Weet-End manager occupied a-seat in the front row. Finally, it is significant that Herr Ernst Toiler is reported to have said that, aftff Sir. William Joynson-Hicks (who had thought fit to place a time limit on the famous deasnatist's visit to this- country) the Gate Theatre was the Most interesting thing in London.

My own visit was the occasion of From Morn till Midnight, by Georg Kaiser, one of the iraidein German school of " Pressionists," as the:v. are Called: have always thought this a dark saying, and devoid of Meaning. " For what is any work of Art worthy cif the name but " expressionism " pouring from -

the artist's soul ? What is life at all but "expressionism

a life, I mean, that has really been worth living ? From Morn till Midnight is absorbingly interesting from the aspect of psychology, but it is essentially a monologue rather than a' play, and it lacks the dramatic sweep, the throbbing humanity of Kaiser's better known tragedy Gas.

Life has closed in on the cashier of a bank. For years he has sat, a trusted servant, behind the iron bars of the counting house. Spiritually he is crushed, dead, a mere machine. In his married life things are the same. His wife frets herself to death over the mutton chops ; his ugly children work frantileally and with ill success at the sonatas of Grieg. All is drab, trivial, on edge. Suddenly he breaks the bonds that fetter him. A beautiful woman calls at the bank. There is some difficulty over her letter of credit. The cashier is

intoxicated by the richness of her perfume. He embezzles a. huge sum Of 'money and absconds With it. :Then starts a

strange morning wandering which ends with a pistol shot at midnight, the dramatist's object here being, I take it, to illustrate the psychological effect of twenty-four hours of mental and physical liberty on an abnormal man whose soul has been repressed for fifty years. Life, according to the gloomy philosophy of Herr Kaiser, is a sorry business. It ends in black darkness. A voice shouts "The light has gone out. Someone has switched it off at the main." 'I heatrically, ought to say, a terrific end. As a comment on life—or, for that matter, on death—bitterly ironical in its application. The production was superb. No other word will do. On a stage no larger than the platform of a village hall and with the minimum of effects, Mr. Peter Godfrey, by clever lighting, grouping and a sense of the theatre amounting to genius; managed to get the atmosphere of this difficult play conveyed to his audience in such a manner that we were left speechless:

Nor do I intend any disrespect when I. say that one day I should like to see the part which he himself played brilliantly given to Mr. Claude Rains as an experiment. Between them they Would startle London. The Society's next production is Ibsen's Hedda Gabler.