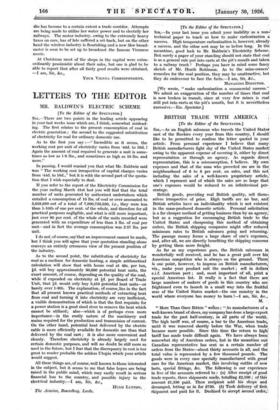 8'14—There are two points in the leading article appearing in your last weeks issue which are, I think, somewhat mislead- ing. The first relates to the present consumption of coal in electric generation ; the second to the suggested substitution of electricity for coal for ordinary domestic use.

As to the first you say :—" Incredible as it seems, the working cost per unit of electricity varies from .44d. to 10d. ! Again the amount of coal required to generate a unit is some- times as low as P8 lbs., and sometimes as high as 10 lbs. and more."

In passing, I would remind you that what Mr. Baldwin said was "The working cost irrespective of capital charges varies from •44d. to 10d.," but it is with the second part of the quota- tion that I wish especially to deal.

If you refer to the report of the Electricity Commission for the year ending March 31st last you will find that the total number of units generated by authorized undertakers which entailed a consumption of 10 lbs. of coal or over amounted to 5,628,099 out of a total of 7,090,756,650, i.e., they were less than 1-10th of one per cent. of the whole, and therefore for all practical purposes negligible, and what is still more important, just over 90 per cent. of the whole of the units recorded were generated with an expenditure of less than 3 lbs. of coal per unit—and in fact the average consumption was 2.57 lbs. per unit.

I do not, of course, say-that an improvement cannot be made, but I think you will agree that your quotation standing alone conveys an entirely erroneous view of the present position of the industry.

As to the second point, the substitution of electricity for coal as a medium for domestic heating, a simple arithmetical calculation will show that with house coal at 40s. per ton, id. will buy approximately 30,000 potential heat units, the exact amount, of course, depe iding on the quality of the coal, while if expended on electricity at id. per Board of Trade Unit, that id. would only buy 3,410 potential heat units—or barely over 1-9th. The explanation, of. course, lies in the fact that all present known practical methods of extracting heat from coal and turning it into electricity are very inefficient, a visible demonstration of which is that the first requisite for a power station is a good sized river to remove the heat which cannot be utilized; also—which is of perhaps even more importance—in the costly nature of the machinery and mains required for the production and transmision of current. On the other hand, potential heat delivered by the electric cable is more efficiently available for domestic use than that delivered by the coal cart ; it is also more convenient and cleanly. Therefore electricity is already largely used for certain domestic purposes, and will no doubt be still more so used in the future, but I fear that the discrepancy in cost is toci great to render probable the ashless Utopia which your article would stiggest.

All these things are, of course, well known to those interested in the subject, but it seems to me that false hopes are being iaised in the public mind, which May easily result in serious financial loss to the country, and possible injury to the electrical industry.—I am, Sir, &c.,