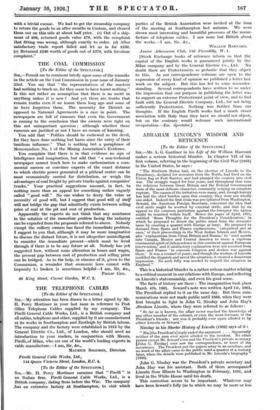 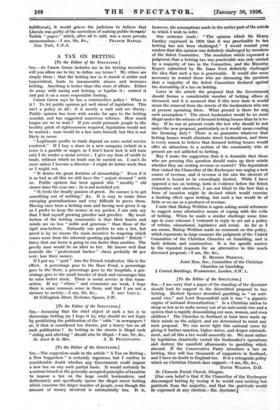 ABRAHAM LINCOLN'S WISDOM AND RETICENCE [To the Editor of the

SIR,—Mr. A. G. Gardiner in his Life of Sir William Harcourt makes a serious historical blunder. In Chapter VII of his first volume, referring to the beginning of the Civil War (1861) in the United States, he says :

"The Southern States had, on the election of Lincoln to the Presidency, declared for secession from the North, had fired on the Union flag at Fort Sumter, and had plunged the country into civil war. The struggle waged for four years, and throughout that time the relations between Great Britain and the Federal Government were of the most delicate character, constantly verging on complete rupture. The causes of the irritation were many, and, though history has laid the chief burden upon this country, they were not wholly one-sided. Indeed the first crisis was precipitated from Washington. Seward, the American Foreign Secretary, conceived the idea that, civil strife might be averted by external strife, and that .by an appeal to the common patriotism against the foreigner the nation might be reunited within itself. Hence the paper of April, 1861, entitled 'Some Thoughts for the President's Consideration,' in which he proposed to divert the public mind from the domestic issue by creating a quarrel with Europe at large. He proposed to demand from Spain and France explanations, categorical and at once,' of their proceedings in the West Indian Islands and Mexico, also 'explanations from Great Britain and Russia,' to send agents into Canada, Mexico and Central America to rouse a vigorous continental spirit of independence in this continent against European intervention, and if satisfactory explanation were not received from Spain and France 'to convene Congress and declare war against them.' It was a counsel of panic, and though the wisdom of Lincoln modified the dispatch and saved the situation, it created a disastrous impression. No such folly was needed to imperil the situation in England."

This is a historical blunder in a rather serious matter relating to a critical moment in our relations with Europe, and reflecting on Lincoln's statesmanship, and even his good sense.

The facts of history are these : The inauguration took place March 4th, 1861. Seward's note was written April 1st, 1861. The President replied to it on the same day. But these com- munications were not made public until 1886, when they were first brought to light in John G. Nicolay and John Hay's Abraham Lincoln, where they were referred to as follows :

" So far as is known, the affair never reached the knowledge of any other member of the cabinet, or even the most intimate of the President's friends ; nor was it probably ever again alluded to by either Lincoln or Seward."

Nicolay in his Shorter History of Lincoln (1902) says of it : "His [the President's] reply ended the argument. . . Apparently neither of the men ever again alluded to the incident. No other person except Mr. Seward's son and the President's private secretary [John G. Nicolay] ever saw the correspondence, or knew of the occurrence. The President put the papers away in an envelope, and no word of the affair came to the public until a quarter of a century. later, when the details were published in Mr. Lincoln's biography' (1886).

John G. Nicolay was the President's private secretary and John Hay was his assistant. Both of them accompanied Lincoln from Illinois to Washington in February, 1861, and lived in the White House until his death.

This correction seems to be important. Whatever may have been Seward's folly (as to which we may be more or less indifferent); it would grieve the judicious to believe that Lincoln was guilty of the unwisdom of making public Sewards' foolish "paper," which, after all is said, was a mere private