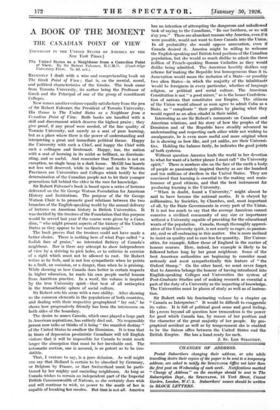 A BOOK OF THE MOMENT

THE CANADIAN POINT OF VIEW

!COPYRIGHT IN THE UNITED STATES OF AMERICA BY THE

New York Times.] The United States as a Neighbour from a Canadian Point of View. By Sir Robert Falconer, K.C.M.G. (Cambridge University Press. Is. 6d. net.) RECENTLY I dealt with a wise and comprehending book on The Greek Point of View ; that is, on the mental, moral, and political characteristics of the Greeks. The book came from Toronto University, its author being the Professor of Greek and the Principal of one of the group of constituent Colleges.

Now comes another volume equally satisfactory from the pen of Sir Robert Falconer, the President of Toronto University. His theme is The United States as a Neighbour from a Cvnadian Point of View. Both books are handled with a skill and discernment which deserve the highest praise ; they give proof, if any proof were needed, of the fine quality of Toronto University, not merely as a seat of pure learning, but as a place where there is the power of understanding and interpreting a great and immediate political theme. Happy the University with such a Chief, and happy the Chief with such a colleague and lieutenant. Happy, too, the nation with a seat of learning in its midst so brilliant, so discrimin- ating, and so useful. And remember that Toronto is not an exception, no single lamp in a dark house. McGill has laurels not less well deserved, while in Quebec and in the Western Provinces are Universities and Colleges which testify to the determination of the Canadian people not to let their younger generations fall behind the elder in the race for knowledge.

Sir Robert Falconer's book is based upon a series of lectures delivered on the Sir George Watson Foundation for American History and Institutions. The purpose of the Sir George Watson Chair is to promote good relations between the two branches of the English-speaking world by the annual delivery of lectures on American history in British Universities. It was decided by the trustees of the Foundation that this purpose would be served last year if the course were given by a Cana.. dian, "who might present aspects of the history of the United States as they appear to her northern neighbour."

The book proves that the trustees could not have made a better choice. There is nothing here of what Pope called "a foolish face of praise," no interested flattery of Canada's neighbour. Nor is there any attempt to show independence of view by a striving to pick• holes, or to criticize in exercise of a right which must not be allowed to rust. Sir Robert writes as he feels, and is not less sympathetic when he points to a fault, an omission, or a danger, than when he is praising. While showing us how Canada does better in certain respects in higher education, he reads his own people useful lessons from American practice. In a word, the volume is inspired by the true University spirit—that best of all antiseptics in the transatlantic sphere of social culture.

Sir Robert sets his scene with a rare ability. After showing us the common elernents in the populations of both countries, and dealing with their respective_ geographical "lay out," he shows how progressively friendly has been the intercourse on both sides of the boundary.

The desire to annex Canada, which once played a large part in American -aspirations, has entirely died out. No responsible persort now talks orthinks of it being" the manifest destiny" of the United States to swallow the Dominion. It is true that

times of depression pessimistic Canadians will tell English visitors that it will be impossible for Canada to resist much longer the absorption that must be her inevitable end. The automatic suction, one is assured, is so potent as to be irre- dstible. _

That, I venture to say, is a pure delusion._ As well might one say that Holland is certain-to be absorbed by _Germany, or Belgium by France, or that Switzerland must be parti- tioned by her mighty and encircling neighbours. As long as Canada wishes to remain an independent part of the Imperial British Commonwealth of Nations, as she certainly does wish and will continue to wish, no power to the south of her is capable of breaking her resolve. But that is not all. America has no intention of attempting the dangerous and unhallowed task of saying to the Canadians, "Be our brethren, or we will Way you." There are abundant reasons why America, even if it were possible, would not want to force Canada into the Union. In all probability she would oppose annexation, even if Canada desired it. America might be willing to welcome the English-speaking and British-bred portions of the Canadian population, but she would as much dislike to admit the three million of French-speaking Roman Catholics as they would dislike being admitted. The American heartily dislikes any scheme formaking the Republic less homogeneous than it is; Annexation- would mean the inclusion of a State—or possibly two alien States—in which the majority of the inhabitants 'would be foreigners in every particular, whether of language religion, or political and social culture. The American Constitution is not" a good mixer," as is the looser Confedera- tion of nations that constitutes our Empire. The citizens of the Union would almost as soon agree to admit Cuba as a State, as " complicate " their politics by s placing what they would regard as an alien citadel in their midst.

Interesting as are Sir Robert's comments on Canadian and American relations, and, his story of how the peoples of the Dominion and of the Republic have steadily advanced to understanding and respecting each other while not wishing to amalgamate, he is even more useful and more original when he is showing us how like, and yet unlike, are their Universi- ties. Holding the balance fairly, he indicates the good points of both systems.

Without question America leads the world in her devotion to what for want of a better phrase I Must Call "the University spirit." There is nowhere else on the face of the earth a body, of people so passionately inspired thereby as are the hundred and ten millions of dwellers in the United States. They are convinced that learning is essential to the making and main- tenance of good citizens, and that the best instrument for producing learning is the University.

"When in doubt, found a University," might almost be said to have become the national motto. It is obeyed by millionaires, by Societies, by Churches, and, most important of all, by the State Governments in every part of the Union. It is not too much to say that the average American cannot conceive a civilized community of any size or importance without a University capable of providing for the educational wants of the population. Canada, though thoroughly appreci- ative of the University spirit, is not nearly so eager, so passion- ate, and so all-embracing in this matter. She is more inclined to insist on quality and to care less for quantity. Her Univer- sities, for example, follow those of England in the matter of, honour courses. Here, indeed, her example is likely to be followed before long by her great neighbour. Some of the best American authorities are beginning to consider most seriously and most sympathetically this feature of "the Oxford Stamp." On the other hand, we must never forget that to America belongs the honour of having introduced into English-speaking Colleges and Universities the system of Post-Graduate Studies and of making research as essential a part of the duty of a University as the imparting of knowledge. The Universities must be places of study as well as of instruc- tion.

Sir Robert ends his fascinating volume by a chapter on

"Canada as Interpreter." It would be difficult to exaggerate its value. It is full of political good sense and good feeling. He proves beyond all question how tremendous is the power for good which Canada has, by reason of her position and the character of the great majority of her people. By geO. graphical accident as well as by temperament she is enabled to be the liaison office between the United States and the British Empire. She has a hand ready for each.