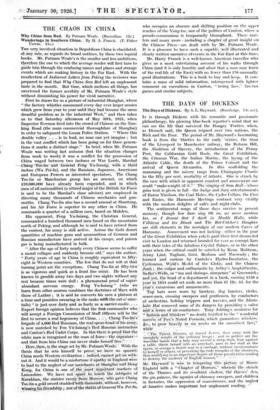 Iv is through Dickens with his romantic and passionate philanthropy, his piercing blue-book reporter's mind that we can see the life that survived the Hungry 'Forties, when, as Disraeli said, the Queen reigned over two nations, the Rich and the Poor. The period of Mr. Hayward's fascinating book is from the 'thirties to the early 'sixties, the time of the Liverpool to Manchester railway, the Reform Bill, the Abolition of Slavery, the introduction of the Penny Post, the Californian Gold Rush, the Great Exhibition, the Crimean War, the Indian Mutiny, the laying of the Atlantic Cable the death of the Prince Coniert and the arrival of Queen Alexandra. In this scaffolding the mumming . and the misery range from 'Champagne -Charlie to the fifty per cent. morta!ity of infants. One is struck by the' ease with which in apparent comfort aid amu-sernent one could "make a night :of it:"7" The-.sitiging -iif Sam Hall—whose grim text is given in full—the Judge and Jury entertainments of Baron Nieolson, the Coal Holes, the Cyder Cellars, the Free and Easies, the Harmonic Meetings contrast very vividly with the modern delights of cafes and night-clubs. The sentimental songs of those days survive in present memory, though few dare sing Oh no, we never mention her, or I dreamt that I dwelt in Marble Halls, while Villikens and his Dinah and The Rat-Catcher's Daughter are still elements in the nostalgia of Mir • modern Caves of Harmony. Amusement was not lacking—either in the year of the Great Exhibition when yokels paid their first dream-fed visit to London and returned branded for ever as corrupt liars with their tales of the fabulous Crystal Palace, or in the other yeara -when the critical could be satisfied by Kean. Malibran, Jenny Lind, Taglioni, Grisi, Braham and Maeready ; the learned and curious by Canteln'a Hydro-Incubator, ; the byelOrinna, Wyld's Model of the Globe, and the Chinese Junk ; the vulgar and enthusiastic by Astley's Amphitheatre, 'Sadler's Wells, or "tea and shrimps, ninepenee" at Greenwich;

' --Toti- hats were worn by hawkers, dog fanciers, clerks, sewer-men, crossing sweepers and gentlemen, by conductors of orchestras, holiday trippers and navvies, and the Idroto-

bo!k fiat removed some of its dangers by providing a valve "