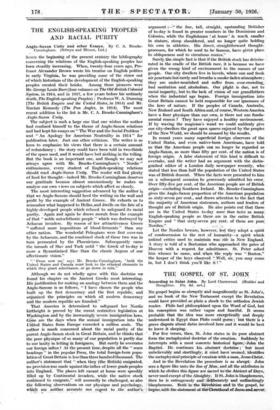 Anglo-Saxon Unity and other Essays. By C. A. Brooke- Cunningham. (Selwyn and Blount, Ltd.) SINCE the beginning of the present centiiry the bibliography concerning the relations of the English-speaking peoples has been steadily increasing. When, twenty-four years ago, Pro- fessor Alexander Brown wrote his treatise on English politics in early Virginia, he was providing some of the straw out of which historians of the development of the English-speaking peoples created their bricks. Among these pioneers were Mr. George Louis Beer (four volumes on The Old British Colonial System, in 1914, and in 1917, a few years before his untimely death, The English-speaking Peoples) ; Professor W. A. Dunning (The British Empire and the United Slates, in 1914) and Mr. Sinclair Kennedy (The Pan Angles, in 1914). The most recent addition to the list is Mr. C. A. Brooke-Cunningham's Anglo-Saxon Unity.

The subject is such a large one that one wishes the author had confined himself to the theme of Anglo-Saxon relations and had kept his essays on" The War and the Social Problem" and "An Apology for American Neutrality in 1914" for publication later. Just one other criticism. . The writer is so keen to emphasize his views that there is a certain amount of redundancy ; the story could have been told in two-thirds of the space used, and it would have lost riothing in the -telling. But the book is an important one, and though we may not always agree with Mr. Brooke-Cunningham's " Nordic " enthusiasms, every student of English-speaking relations shbuld read Anglo-Saxon Unity. The reader will find plenty of -food for thought—indeed Mr. Brooke-Cunningham deserves our gratitude because almost unconsciously he makes us analyse our own views on subjects which affect us closely.

The most interesting suggestion advanced by the author is that we Anglo-Saxons should heed the writing on the wall and profit by the example of Ancient Greece. He exhorts us to remember what happened to Hellas, and dwells on the fate of a highly-developed people which refused to safeguard its racial purity. -Again and again he draws morals from the example of that "noble autochthonie people" which was destroyed by Achaean invaders. By reason of her attractiveness Greece "suffered more impositions of blood-ferments" than any other nation. The wonderful Pelasgians were first over-run by the Achaeans, and the combined stock Of these two was in turn permeated by the Phoenicians. Subsequently came the inroads of Slav and Turk until "the Greek of to-day is more a Byzantinized Slav 'than the classic Aegean of our affectionate vision."

" From now on,' says Mr. Brooke-Cunningham, both the United States and Canada must look to the ethnical elements to which they grant admittance, or go down in ruin."

Although we do not wholly agree with this doctrine we found his chapter on the Ancient Greeks most interesting. His justification for making an analogy betWeen them and the Anglo-Saxons is -as follows, " I'have chosen the people who built up the first democracy and the first republic, and organized the principles on which all modern democracy add the modern republic are founded."

That America is determined to safeguard her Nordic birthright is proved by the recent restrictive legislation at Washington and by the increasingly 'severe immigration laws. Chile are the days when the annual immigration into the Uated States from Europe' exceeded a million souls. The author is much concerned about the racial purity of the parent Anglo-Saxon stock in Great Britain, and he thinks that the poor physique of so many of our population is partly due tnour laxity in letting ill foreigners: But surely he overrates our foreign influx ? At the present time, despite all the "scare headings" in the popular Press, the total foreign-born popu- lation of Great Britain is less than three hundred thousand. The author's statement that when they (the British) emigrated, no provision was made against the influx of lower grade peoples into England. The places left vacant at home were speedily filled up by Continental invaders, while the native stock continued to emigrate," will assuredly be challenged, as also the following' Observations on our physique and psychology, wlich aee neither accurate nor cogent to -the author's. argument :—" the fine, tall, straight, upstanding Britisher of to-day is found in greater numbers in the Dominions and ' Colonies, while the Englishman at home' is inuAi smaller in stature, stoop shouldered, and no longer quite holding his own in athletics. His direct, straightforward thought- processes, for which he used to be' famous, have Ifyien place to obliqueness and to circuitous routes."

Surely the simple fact is that if the British stock has deterio- rated in the cradle of the British race, it is because we have given the wrong kind of environment to the masses of our people. Our city dwellers live in hovels, where sun and fresh air penetrate but rarely and breathe a smoke-laden atmosphere; they are under-nourished and suffer from_ over-crowding, bad sanitation antt, alcoholism, Our plight is due, not to racial impurity, but to the lack of Aision. of our grandfathers when the industrial age began. Foreign immigration into Great Britain cannot be held responsible for our ignorance of the laws of nature. If the peoples of Canada, Australia, New Zealand and South Africa and, of course, Western America have a finer physique than our own, is there not one funda- mental reason ? They have enjoyed a healthy environment. If by waving the magician's wand we could suddenly give our city-dwellers the great open spaces enjoyed by the peoples of the New World, we should be amazed by the results.

In recent years many superficial foreign observers of the United States, and even native-born Americans, have told, us that the American people can no longer, be regarded as Anglo-Saxon, as more than fifty per cent. of the nation is of foreign origin. A false statement of this kind is difficult to overtake, and the writer had an argument with the distin- guished editor of a London daily newspaper recently, who stated that less than half the population of the United States was of British descent. When the fncts were presented to him on a subsequent occasion he generously admitted his error. Over fifty-five per cent. of the American people are of British origin—excluding Southern Ireland. Mr. Brooke-Cunningham gives the Anglo-Saxon proportion of the American population as sixty-seven per cent., and draws attention to the fact that the majority of American statesmen, authors and leaders of thought are of British origin. He also points out that there are in the United States to-day more than twice as many English-speaking people as there_ are in the entire British Empire and "that sixty-seven per pent. of them - are pure: or es. N di " Let the Nordics beware, however, lest they adopt a spirit of condescension to the rest of humanity—a spirit which unkind critics used to maintain was rife in New England. A story is told of a Bostonian who approached the gates of .Heaven with a request for _admittance. St. Peter asked him whence he came, and; sviwn the reply was "Boston," the keeper of the keys observed Yell, sir, you may come in, but I don't think you'll like it ! "