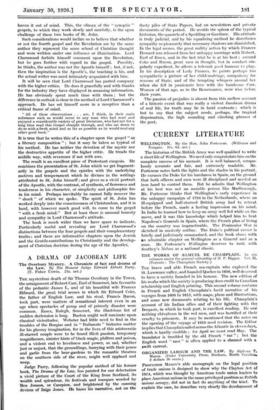 A DRAMA OF JACOBEAN LIFE

The Overbury Mystery. A Chronicle of fact and drama of the Law. By His Honour Judge Edward Abbott Parry. (T. Fisher Unwin. 21s. net.) THE mysterious death of Sir Thomas Overbury in the Tower, the arraignment of Robert Carr; Earl of Somerset, late favourite of the pedantic -James I., and of his beautiful wife Frances HdWard, the great trial scenes in which Sir Edward Coke, the father of English Law, and his rival, Francis Bacon, took jart,r were matters of sensational interest even in an age 'when spectacles of pomp and of princely disaster were common. "Essex, Ralegh, Somerset, the illustrious list of sudden declension is long. Burton might well ruminate upon classical vicissitudes.. Webster had little need to find in the troubles of the Borgias and in " Italianate " histories matter for his gloomy imagination, for in the lives of this aristocratic ill-starred couple were to be found illicit passion, temporary magnificence, sinister hints of black magic, philtres and poison, and a violent end to loveliness and power, so sad, whether just or unjust, that the gromidlings, hurrying with their pence and garlic from the bear-gardens to the romantic theatres on the southern side of the river, might well applaud and weep.

Judge Parry, following the popular method of his former book, The Drama of the Lam, has -painted for our delectation a vivid picture of the Court of the King from Scotland, its wealth and splendour, its festivals and masques worded by 'Ben Jonson, or Campion, and brightened by the cunning devices of Inigo Jones. He bases his "sanative, not on-the

dusty piles of State Papers, but on newsletters and private documents of the period. He avoids the spleen of the typical historian, the quarrels of a Spedding or Gardiner. His attitude is truly judicial, and by his equalizing method he distributes sympathy so pleasantly that necessary shadows are diminished. In the legal scenes, the great nullity action by which Frances Howard was released from her unhappy marriage with Robert, Earl of Essex, and in the last trial he is at his best ; around Coke and Bacon, great men in thought, but in conduct sin- gularly expedient, he allows a tolerant good humour to play. In his description of Lady Frances, he paints perhaps too sympathetic a picture of her child-mafriage, compulsory for reasons of State, and of the tempting whispers around her when she fell in passionate love with the handsome Carr. Women of that age, as in the Renaissance, were wise before their years.

The passion of prejudice is absent from this mellow account of a historic event that was really a violent Jacobean drama of real life, for truth may lie in lurid contrasts ; which is but to say that the subject needs, perhaps, the tragical dispensation, the high sounding and climbing phrases of the poet.