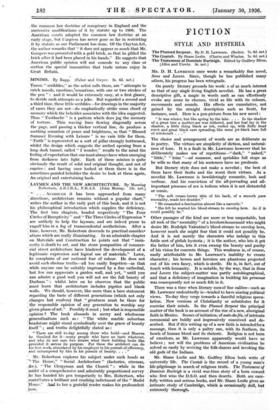 • The Testament of Dominic Btuieigh. Edited by-Godfrey Elton. (Allen and Unwin. 5s. net.) MR. D. H. LAWRENCE once wrote a remarkably fine novel, Sons and Lovers. Since, though he has published many others, his progress has been retrograde.

On purely literary grounds his worki s of as much interest as that of any single living English novelist. He has a great descriptive gift, a magic in words such as can effortlessly evoke any scene he chooses, vivid as life with its colours, movements and sounds. His effects are cumulative, not gained by the straight description such as Scott, for instance, used. Here is a pen-picture from his new novel :

"It was winter, but like spring by the lake. . . . In the shadow of a great tree a mother-ass was tethered, and her foal lay in the /shadow, a little thing black as ink, curled up, with huffy head erect and great black ears spreading, like some jet-black hare full of witchcraft . .

The choice and arrangement of words are as deliberate as in poetry. The virtues are simplicity of diction, and natural- • ness of tone. It is a fault in Mr. Lawrence however that he • deliberately makes use of repetitions—" dark," "naked,"

"little," "loins "—ad nauseam, and sprinkles full stops as he wills so that many of his sentences have no predicate.

• But literary style does not make a novelist ; the best of them have their faults and the worst their virtues. As a • novelist Mr. Lawrence is bewilderingly romantic, lush and verbose. And his conviction of the all-pervading and all- important presence of sex is tedious when it is not distasteful or comic.

"The still cream-brown skin of his back, of a smooth pure sensuality, made her shudder."

"She felt he wanted his blood-stream to envelop hers. As if it could possibly be."

Other passages of the kind are more or less unquotable, but all reek of the "mentality" of a lovelorn housemaid who might desire Mr. Rudolph Valentino's blood-stream to envelop hers,

however much she might fear that it could not possibly be. And it is not merely the characters who indulge in this futile sort of girlish hysteria ; it is the author, who lets it get

the better of him, lets it even swamp the beauty and purity of his vision for concrete things. This weakness is, of course, easily attributable to Mr. Lawrence's inability to create character ; his heroes and heroines are phantoms projected out of his own fancy, which is sterile. He is, in fact, out of

touch with humanity. It is notable, by the way, that in Sons and Lovers the subject-matter was partly autobiographical, and that a deficiency of imagination in building his personae was consequently not so much felt in it.

There was a time when literary men of fine calibre—such as Mr. Lawrence undoubtedly-is—tended to have searing political views. To-day they verge towards a fanciful religious specu- lation. New versions of Christianity or substitutes for it

exercise their minds. In the Plumed Serpent the principal matter of the book is an account of the rise of a new, aboriginal faith in Mexico. Scenes of initiation, of auto-da-fes, of intricate

ceremonial are boldly and impressively conceived and de- scribed. But if this writing up of a new faith is intended fora message, then it is only a paltry one, with its feathers, its • bowls of human blood and its rhetoric. Religion is not born of emotions, as Mr. Lawrence apparently would have us believe ; nor will the problems of American civilization be solved so easily by reviving the folk-dances and invoking the old gods Of the Indians.

Mr. Shane Leslie and Mr. Godfrey Elton both write university life. The Cantab is the record of a young man's life-pilgrimage in search of religious truth. The Testament of . Dominic Burleigh is a vivid war-time story of a born coward

who first wins the D.S.O. and then deserts. Both are care- fully written and serious books, and Mr. Shane Leslie gives an intimate study of Cambridge, which is occasionally dull, but