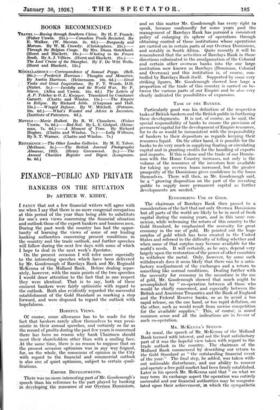 ECONOMIZING USE OF GOLD.

The chairman of Barclays Bank then passed to a consideration of the fact that not only Oversea Dominions but all parts of the world are likely to be in need of fresh capital during the coming years, and in this same con- nexion, while welcoming the return of this country to the Gold Standard, he emphasized the necessity for great ebonorny in the use of gold. He pointed out the huge surplus of gold which has been created in the United States and referred to the difficulty of telling whether and when some of that surplus may become available for the world's needs. It will certainly, as he says, depend very largely upon the restoration of the power of other countries to withdraw the metal. Only, however, by some such withdrawals does it seem likely that there can be a satis- factory readjustment of the exchanges and a return to something like normal conditions. Dealing further with the necessity for economy in the meantime in the use of gold, Mr. Goodenough showed that much might be accomplished by "co-operation between all those who would be chiefly concerned, and especially between the British and American Treasuries and the Bank of England and the -Federal Reserve banks, - so as to -avoid a too rapid release, on the one hand, or too rapid deflation, on the other, such as would result from unwise competition for the available- supplies." This, of course, is sound common sense and all the indications are in favour of such co-operation.