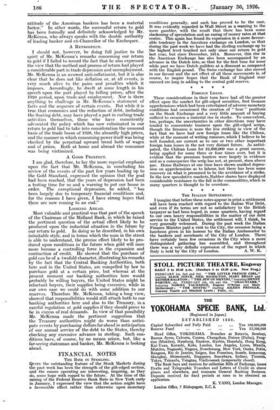 Qum the outstanding feature of the Stock Markets during the past week has been the strength of the gilt-edged section, and the causes operating are interesting, inspiring, as they do, some hope with regard to the future. At the time of the raising of the Federal Reserve Bank Rate in New York early in January, I expressed the view that the action might have a favourable effect rather than otherwise upon monetary

conditions generally, and such has proved to be the case. It was evidently regarded in Wall Street as a warning to the mere gambler, with the result that there has been some slackening of speculation and an easing of money rates at that centre. This again has found its expression in a more favour- able tendency in the American exchange on London, so that during the past week we have had the sterling exchange up to the highest level touched not only since our return to gold last year, but since December, 1914. Moreover, this rise in the American Exchange has ;Ilso been accompanied by an advance in the Dutch rate, so that for the first time for some while past we have Dutch guilders at a discount as compared with the English pound. The Swiss exchange has also moved in our favour and the net effect of all these movements is, of course, to inspire hopes that the Bank of England may succeed ere long in adding to the central gold reserve.