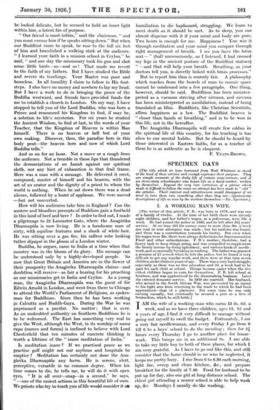 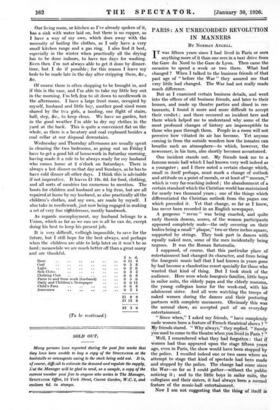 [The title which we have borrowed from Walt Whitman to stand at the head of these articles well enough expresses their purpose. They are simple accounts of the daily life of certain wage-earners, and of an elementary schoolmaster who began life as a hand-worker, written by themselves. Beyond the very rare correction of a phrase which made it difficult to follow the sense no attempt has been made to " edit " the articles. Their interest and attractiveness would disappear if we tried to turn them into something other than they are—spontaneous descriptions of life as seen by the workers themselves.—ED. Spectator.] I. A WORKING MAN'S WIFE.

[The writer of this article, F. B., was born in 1878, and was one of a family of twelve. At the tune of her birth there were already eight children, and her father's wages, as a policeman, were 28s. a week. He had joined the police in 1860, and he left after 26f years' service. At no time did his money come to more than 30s. a week (no coal or rent allowance was made ; but his uniform was found, and there was a contribution towards his boots). But even when his wages were 30s. there were always deductions for Superannuation Fund and other subscriptions. F. B.'s mother, therefore, had a heavy task to keep things going, and was compelled to supplement the family income by doing upholstery, and various kinds of needle- work, and occasionally bytaking inwashing. The father 9788 granted a pension of £1 a week when he left the police, but he found it very difficult to get any regular work, and there were at that time seven children under thirteen years of age. There was a very hard struggle, especially as there was no free education and 2d. a week had to be paid for each child at school. Things became easier when the five eldest children began to earn for themselves. F. B. left school at fourteen and was apprenticed to the dressmaking business. Later she entered domestic service. In 1910 she married. Her husband, who served in the South African War, was prevented by an injury to his right arm from returning, to the trade to which he had been apprenticed—that of a plasterer. For some time he was only earning casually, but eventually he secured a post at a firm of booksellers, which he still holds.] T AM the wife of a working man who earns 23 8s. Od. a -I- week, and as we have three children, ages 13, 12 and 4 years of age, I find• it very difficult to manage without going out myself to swell the budget. Fortunately, I am a very fair needlewoman, and every Friday I go from 9 till 6 to a boys' school to do the mending ; then for 2f hours every Thursday I go to another place for house- work. This brings me in an additional 8s. I am able to take my little boy to both of these places, for which I am very grateful. As I have to go out like this, and still consider that the home should in no wise be neglected, it keeps me pretty busy. I rise from 6 to 6.80 each morning, light fire, sweep and clean kitchen, &c., and prepare breakfast for the family at 7.40. Food for husband to be put up for day, also one girl at long distance school. The eldest girl attending a nearer school- is able to help wash up, &c. Mondays I usually do the washing. Our living room, or kitchen as I've already spoken of it, has a sink with water laid on, but there is no copper, so I have a way of my own, which does away with the necessity of boiling the clothes, as I only have a very small kitchen range and a gas ring. I also find it best, especially in the winter when practically all the drying has to be done indoors, to have two days for washing. Even then I'm not always able to get it done by dinner- time, but I do if possible ; for this reason I leave my beds to be made late in the day after stripping them, &c., &c.

Of course there is often shopping to be brought in, and if this is the case, and I'm able to take my little boy out in the morning, I'm left free to sit down to needlework in the afternoons. I have a large front room, occupied by myself, husband and little boy, another good sized room shared by the tv.,* girls, la landing, one flight of stairs, hall, step, &c., to keep clean. We have no garden, but in the good weather I'm able to dry my clothes in the yard at the back. This is quite a convenient flat on the whole, as there is a lavatory and coal cupboard besides a coal cellar at our disposal downstairs.

Wednesday and Thursday afternoons are usually spent in cleaning the two bedrooms, as going out on Friday I have to get a good bit of housework in Saturday morning, having made it a rule to be always ready for my husband who comes home at 2 o'clock on Saturdays. There is always a hot dinner on that day and Sundays, as he has to have cold dinner all other days. I think this is advisable if not imperative. It leaves El. 13s. 6d. for food, clothing, and all sorts of sundries too numerous to mention. The boots for children and husband are a big item, but are all repaired at home by my husband, as also practically all the children's clothes, and my own, are made by myself. I also take in needlework, just now being engaged in making a set of very fine nightdresses, mostly handwork.

As regards unemployment, my husband belongs to a Union, which as far as we can see is all he can do, except doing his best to keep his present job.

It is very difficult, wellnigh impossible, to save for the future, but I still hope for the best always, and perhaps when the children are able to help later on it won't be so hard ; meanwhile we are much better off than a great many and are thankful.

Fares to and from work (husband) Daily and Children's Newspaper Child's Fare .. Insurance • • • •