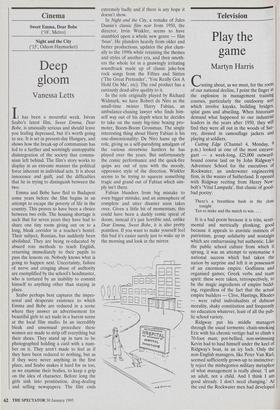 It has been a mournful week. Istvan Szabo's latest film, Sweet Emma, Dear Bobe, is unusually serious and should leave you feeling depressed, but it's worth going to see. It is set in present-day Hungary, and shows how the break-up of communism has led to a further and seemingly unstoppable disintegration of the society that commu- nism left behind. The film's story works to display in an extreme manner the political force inherent in individual acts. It is about innocence and guilt, and the difficulties that lie in trying to distinguish between the two.

Emma and Bobe have fled to Budapest some years before the film begins in an attempt to escape the poverty of life in the country. This proves to have been a choice between two evils. The housing shortage is such that for seven years they have had to share one tiny room giving out on to a long, bleak corridor in a teacher's hostel. Their subject, Russian,. has suddenly been abolished. They are being re-educated by absurd rote methods to teach English, returning immediately to their pupils to pass the lessons on. Nobody knows what is going to happen next. Uncertainty, failure of nerve and cringing abuse of authority are exemplified by the school's headmaster, who is tortured by an inability to commit himself to anything other than staying in place.

Szabo perhaps best captures the imper- sonal and desperate existence to which Emma and Babe are reduced in a scene where they answer an advertisement for beautiful girls to act nude in a harem scene at the local film studio. In an incredibly bleak and unsensual procedure these women are made to strip off everything but their shoes. They stand up in turn to be photographed holding a card with a num- ber on it. They aren't made to feel as if they have been reduced to nothing, but as if they were never anything in the first place, and Szabo makes it hard for us too, as we examine their bodies, to keep a grip on the idea of character. Before long the girls sink into prostitution, drug-dealing and selling newspapers. The film ends extremely badly and if there is any hope it doesn't show.

In Night and the City, a remake of Jules Dassin's classic film noir from 1950, the director, Irvin Winkler, seems to have stumbled upon a whole new genre — film `brun'. He plunders heavily from older and better productions, updates the plot clum- sily to the 1990s while retaining the themes and styles of another era, and then smoth- ers the whole lot in a gnawingly irritating soundtrack made up of classic juke-box rock songs from the Fifties and Sixties (`The Great Pretender', 'You Really Got A Hold On Me', etc). The end product has a curiously dead-alive quality to it.

In the role originally played by Richard Widmark, we have Robert de Niro as the small-time twister Harry Fabian, an ambulance-chasing lawyer who finds him- self way out of his depth when he decides to take on the nasty big-time boxing pro- moter, Boom-Boom Grossman. The single interesting thing about Harry Fabian is his one-dimensionality: De Niro hams up the role, giving us a self-parodying amalgam of the various streetwise hustlers he has played over the years. But unfortunately the comic performance and the quick-fire quips are out of sync with the moody, oppressive style of the direction. Winkler seems to be trying to squeeze something tragic and grand out of Fabian which sim- ply isn't there.

Fabian blunders from big mistake to even bigger mistake, and an atmosphere of complete and utter disaster soon takes over. Given a little bit of momentum, this could have been a darkly comic spiral of doom; instead it's just horrible and, unlike Dear Emma, Sweet Bobe, it is also pretty pointless. If you want to make yourself feel this bad it's easier surely just to wake up in the morning and look in the mirror.