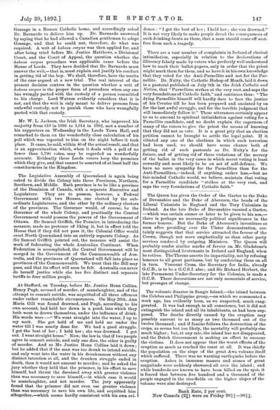 Page 3, 30 July 1892 — The volcanic disaster in Sangir Island,—the island between the Celebes
Close

The volcanic disaster in Sangir Island,—the island between the Celebes

and Philippine group,—on which we commented a week ago, has evidently been, as we suspected, much exag- gerated. It was bad enough in all conscience, but it did not extinguish the island and all its inhabitants, as had been sup- posed. The deaths directly caused by the eruption may possibly amount to as many as two thousand out of the twelve thousand ; and if famine follows the destruction of the crops, as seems but too likely, the mortality will probably rise much higher ; but, at any rate, the island has not disappeared, and the Dutch Government is making an effort to succour the victims. It does not appear that the worst effects of the eruption so much as reached the coast at all. It was chiefly the population on the slope of the great Awa volcano itself which suffered. There was no warning earthquake before the eruption. Ashes in immense masses and stones of great magnitude were suddenly showered all over the island ; and while hundreds are known to have been killed on the spot, it is feared that between five hundred and a thousand of the people engaged in the rice-fields on the higher slopes of the volcano were also destroyed.