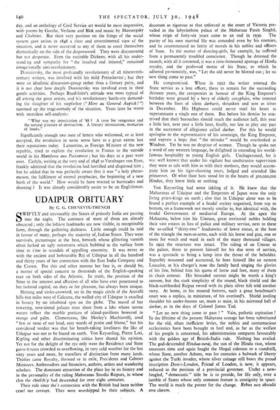 SWIFTLY and irrevocably the States of princely India are passing into the night. The contours of most of them are already obscured ; only the loftiest landmarks are now visible, in recognisable form, through the gathering darkness. Little enough could be said in favour of many, perhaps the majority of, Indian States. They were survivals, picturesque at the best, beneath whose glittering varnish often lurked an ugly rottenness which bubbled to the surface from time to t: me in scandals of appalling enormity. It was never so with the ancient and hofiourable Raj of Udaipur in all the hundred and thirty years of her connection with the East India Company and the Crown. For this and other reasons her fate is, or should be, a matter of special concern to thousands of the English-speaking race on both sides of the Atlantic. In truth, the position of the State in the interest and affection of all who have ever penetrated to her isolated capital, on duty. or for pleasure, has always been unique.

Shining and violet-crowned, set in the magic circle of the Aravalli hills 600 miles west of Calcutta, the walled city of Udaipur is excelled in beauty by no inhabited spot on the globe. The massif of her towering, rose-tinted palaces rises sheer from a lake whose serene waters reflect the marble porticos of island-pavilions bowered in orange and palm. Clemenceau, like Morley's Machiavelli, used " few or none of our loud, easy words of praise and blame," but his considered verdict was that for breath-taking loveliness the like of Udaipur was not to be found on earth. Von Keyserling, Pierre Loti, Kipling- and other discriminating critics have shared his opinion. Yet not for the delight of the eye only were the Residency and State guest-houses crowded to overflowing, in very cold weather for the last sixty years and more, by travellers of distinction from many lands. Thither came Royalty, throned or in exile, Pres:dents and Cabinet Ministers, Ambassadors and financiers, authors, artists and wandering scholars. The dominant attraction of the place lay in its history and in the personality of the ruling Maharanas Sisodia Rajputs, in whose clan the chiefshP had descended for over eight centuries.

Their rule since ther connection with the British had been neither cruel nor corrupt. They were worshipped by their subjects. A decorum as rigorous as that enforced at the court of Victoria pre- vailed in the labyrinthine palace of the Maharana Fateh Singhji, whose reign of forty-six years came to an end in 5930. The purity of his own married life was conceded even by his enemies, and he countenanced no laxity of morals in his nobles and officers of State. In the matter of dancing-girls, for example, he suffered from a permanently troubled conscience. Though he detested the nautch, with all it connoted, it was a time-honoured apanage of Hindu royalty, and the professed motto of his State, to which he adhered passionately, was, " Let the old never be blotted out ; let no new thing come to pass."

He compromised. When in 5922 the writer entered the State service as a lent officer, there to remain for the succeeding thirteen years, the ceremonies in honour of the King Emperor's birthday were graced by a bevy of elderly coryphies, who tottered between the lines of silent darbaris, shrunken and sere as irises in December. His Highness could never steel his heart to superannuate a single one of them. But before his demise he con- trived that their barouches should reach the audience hall, this year a little late, next year a little later, finally, too late to play any part in the sacrament of allegiance called darbar. For this he would apologise to the representative of his sovereign, the King Emperor, and express a hope that " the mistake " would be overlooked at Windsor. Yet he was no despiser of women. Though he spoke not a word of any western language, he delighted in extending his world- famous hospitality to young English girls. Unchaperoned, for it was well known''that under his vigilant but unobtrusive supervision they were as safe with him as with their mothers, they would accom- pany him on his tiger-shooting tours, lodged and attended like princesses. Of what their host stood for in the hearts of 300,000,000 Hindus, they knew little or nothing.

Von Keyserling had some inkling of it. He knew that the Maharanas of Udaipur and the Emperors of Japan were the only living priest-kinks on earth ; also that in Udaipur alone was to be found a perfect example of a feudal society organised, from top to bottom, on a framework not merely similar to, but identical with, the feudal Governments of mediaeval Europe. At the apex the Maharana, below him his Umraos, great territorial nobles holding their vast estates in lieu of police and military service, next to these the so-called " thirty-two " feudatories of lower status, at the base of the triangle the men-at-arms, each with his horse and gun, one or more for watch and ward in each of the many thousand villages. In 1922 the structure was intact. The riding of an Umrao to the palace, there to present himself 'for his due term of service, was a spectacle to bring a lump into the throat of the beholder. Superbly mounted and accoutred, he bore himself like an eastern Lancelot, at his charger's nose the family bard singing the glories of his line, behind him his quota of horse and foot, many of them in chain armour. His brocaded surcoat might be worth a king's ransom, but the, stark simplicity of the "round, black shield and the black-scabbarded Rajput sword with its plain silver hilt told another story. At home, in his moated fortress, such a great henchman's court was a replica, in miniature, of his overlord's. Shield jostling shoulder his under-barons sat, mum as mice, in his mirrored hall of darbar, as in the days of Colonel James Tod.

" Let no new thing come to pass ! " Vain, pathetic aspiration ! In the lifetime of the present Maharana scutage has been substituted for the old, often inefficient levies, the nobles and contumacious ecclesiastics have been brought to heel and, as far as the welfare of his people is concerned, his administration compares favourably with the golden age of British-India rule. Nothing has availed. The god-descended Hindua-suraj, the sun of the Hindu race, whose ancestors time and again fought the Mogul colossus to a standstill, whose State, another Athens, was for centuries a bulwark of liberty against the Turki invader, whose silver coinage still bears the proud inscription Dost-i-London, Friend of London, is now, it appears, reduced to the position of a provincial governor. Under a new- fangled, "democratic" title he is to preside, for life only, over a jumble of States whose only common feature is contiguity in space. The world is much the poorer for the change. Rebus nox abstulit atra clarem.