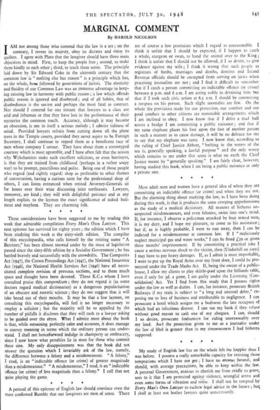 IAM not among those who contend that the law is a ass ; on the contrary, I revere its majesty, obey its dictates and enjoy its quillets. I agree with Plato that the lawgiver should have three main objectives in mind. First, to keep the people free ; second, to make them kindly to each other ; third, to teach them sense. The principle laid down by Sir Edward Coke in the sixteenth century that the common law is " nothing else but reason " is a principle which has, on the whole, bc-e.a. followed by generations of juristi. The elasticity and fluidity of our Common Law was an immense advantage in keep- ing existing law in harmony with public reason ; a law which offends public reason is ignored and disobeyed ; and of all habits, that of disobedience is the easiest and perhaps the most fatal to contract. Nor should I contend for one instant that lawyers as a class are arid and inhuman or that they have lost in the performance of their mysteries the common touch. Accuracy, although it may become an obsession, is not in itself a serious malady ; I admire tidiness of mind. Provided lawyers refrain from cutting down all the plane trees in the Temple courts, provided they never aspire to be Foreign Secretary, I shall continue to regard them as a beneficent race of men whose company I savour. They have about them a stereotyped courtesy which is most agreeable, and I have often felt that the reason why Wykehamists make such excellent solicitors, or even barristers, is that they are trained from childhood (perhaps in a rather soapy way) to be prompt, punctilious and polite. Being one of those people who regard (and rightly regard) shop as preferable to other themes of conversation, having a curious taste for the professional shop of others, I can listen entranced when retired Attorney-Generals sit for hours over their wine discussing joint tortfeasors. Lawyers, moreover, are kind ; they will with delightful patience and at any length explain to the layman the exact significance of naked bail- ment and mayhem. They are charming folk.

* * These considerations have been suggested to me by reading this week that admirable compilation Every Man's Own Lawyer. This neat epitome has survived for eighty years ; the edition which I have been studying this week is the sixty-sixth edition. The compiler of this encyclopaedia, who calls himself by the retiring name " A Barrister," has been almost snowed under by the mass of legislation passed since the sixty-fifth edition by a Socialist Government ; he has battled bravely and successfully with the snowdrifts. The Companies Act (1947), the Crown Proceedings Act (i947), the National Insurance Act (1946), the National Health Services Act (1946) have all neces- sitated complete revision of previous sections, and to them much space and thought have been devoted. Those K.C.s whom I have consulted praise this compendium ; they do not regard it (as some doctors regard medical dictionaries) as a dangerous popularisation of an obscure and esoteric science ; they do not suggest that it will take bread out of their mouths. It may be that a few laymen, on consulting this encyclopaedia, will feel it no longer necessary to employ a solicitor ; but the majority will be so appalled by the number of pitfalls it discloses that they will rush to a lawyer asking to be guided over the abyss. What I admire most about the book is that, while remaining perfectly calm and accurate, it does manage to convey meaning in terms which the ordinary person can under- stand. I shall not henceforward indulge in champerty or embracery, since I now know what penalties lie in store for those who commit these sins. My only disappointment was that the book did not answer the question which I invariably ask of the law, namely, the difference between a felony and a misdemeanour. " A felony," I read, is an "indictable offence (or crime) of greater magnitude than a misdemeanour." "A misdemeanour," I read, is an " indictable offence (or crime) of less magnitude than a felony." I call that not quite playing the game.

* * A perusal of this epitome of English law should convince even the most confirmed Bumble that our lawgivers are men of sense. There are of course a few provisions which I regard as unreasonable. I think it unfair that I should be expected, if I happen to catch a whale, sturgeon or swan, to hand the animal over to the King ; I think it unfair that I should not be allowed, if I so desire, to give evidence against my wife ; I think it wrong that such people as registrars of births, marriages and deaths, dentists and Inland Revenue officials should be exempted from serving on juries when practising journalists are not ; and I find it difficult to remember that if I catch a person committing an indictable offence (or crime) between 9 p.m. and 6 a.m. I am acting nobly in detaining him, but that if I took such civic action at 6.5 a.m. I should be committing a trespass on his person. Such slight anomalies are few. On the whole the provisions made for our protection, our comfort and our good conduct to other citizens are reasonable arrangements which I am inclined to obey. I now know that if I drive a mad bull across a bridge I am committing a public nuisance ; and that if my tame elephant places his foot upon the foot of another person in such a manner as to cause damage, it will be no defence for me to say that my elephant was tame. I now know that, according to the ruling of Chief Justice Abbott, " bathing in the waters of the sea is, generally speaking, a lawful purpose " and the only worry which remains to me under that score is what on earth the Chief Justice meant by " generally speaking." I am fairly clear, however, having studied this book, when I am being a public nuisance or only a private one.

Most adult men and women have a general idea of when they are committing an indictable offence (or crime) and when they are not. But the alarming thing about studying the law, as I have been doing during this week, is that it produces the same creeping apprehensions as the study of a medical dictionary. All manner of hitherto un- suspected misdemeanours, and even felonies, swim into one's mind. If, for instance, I observe a policeman attacked by four armed men, it is my duty, and I hope my pleasure, to come to his assistance ; but if, as is highly probable, I were to run away, then I can be indicted for a misdemeanour at common law. If I " maliciously neglect municipal gas and water works," I can be fined £20 or given three months' imprisonment. If by committing a practical joke I cause a serious nervous shock to the victim, then (Underhill on torts) I may have to pay heavy damages. If, as I admit is most improbable, I were to put up the Royal Arms over my front door, I could be pro- secuted under the Trade Marks Act. If, being the owner of a public- house, I allow my clients to play skittle-pool upon the billiards table, even if only for 3d. a game, I am guilty under the Licensing (Con- solidation) Act. Yet I find from this study that I possess rights under the law as well as duties. I can, for instance, prosecute British Railways if my train is subject to " a long and unusual delay," ex- posing me to loss of business and attributable to negligence. I can prosecute a hotel which assigns me a bedroom the late occupant of which had an infectious disease. I can sue my bank if they refuse without good reason to cash one of my cheques. I can, should I so desire, prosecute foxhunters for riding unreasonably over my land. And the protection given to me as a journalist under the law of libel is greater than in my timorousness I had hitherto supposed.

My study of English law has on the whole left me happier than I was before. I possess a really remarkable capacity for resisting those temptations which I have not got ; I have no animus furandi, and should, with average precautions, be able to keep within the law. A paternal Government, anxious to cherish me from cradle to grave, sees to it that I am protected against violence, wrongful arrest and even some forms of vibration and noise. I shall not be tempted by Every Man's Own Lawyer to eschew legal advice in the future ; bu; I shall at least not bother lawyers quite unnecessarily.