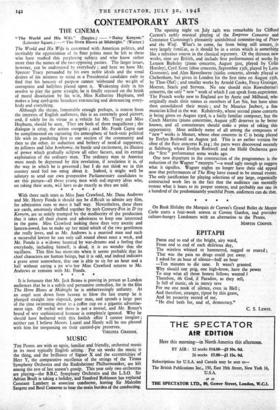 The World and His Wife is concerned with American politics, and inevitably the appreciation of its finer points must be left to those who have studied this perplexing subject and who know rather more than the names of the two opposing parties. The larger issues, however, can be understood by everybody ; and here we have Mr. Spencer Tracy persuaded by his own noble ideals and the venal desires of his mistress to stand as a Presidential candidate only to find that his honesty of purpose cannot 'withstand the weight of corruption and ballyhoo placed upon it. Weakening daily in his resolve to play the game straight, he is finally rescued on the brink of moral dissolution by his wife, Miss Katharine Hepburn, and makes a long apologetic broadcast renouncing and denouncing every- body and everything. Although the theme, lamentably enough perhaps, is remote from the interests of English audiences, this is an extremely good picture, and, if solely for its virtue as a vehicle for Mr. Tracy and Miss Hepburn, should be seen., They are both of them magnificent ; the dialogue is crisp, the action energetic ; and Mr. Frank Capra can be complimented on capturing the atmosphere of back-stair political life with its pandering first to one section of the community and then to the other. its seduction and bribery of needed supporters; its jolliness and false bonhomie, its bustle and excitement, its illusion of power which gradually eclipses all other factors, and its eternal exploitation of the ordinary man. The ordinary man in America must needs be depressed by this revelation, if revelation it is, of the way in which he is governed ; but I do not think we in this country need feel too smug about it. Indeed, it might well be salutary to send our own prospective Parliamentary candidates to see this picture—all those young men with red.mptory ideas who, on taking their seats, will have to do exactly as they are told.

With three such stars as Miss Joan Crawford, Mr. Dana Andrews and Mr. Henry Fonda it should not be d:fficult to admire any film, for admiration runs to meet it half way. Nevertheless, these three ace cards, amorously shuffled together by 2oth Century-Fox in D-isy Kenyon, are so nearly trumped by the mediocrity of the production that it takes all their charm and adroitness to keep one interested in the game. Miss Crawford looking these days very ascetic and lantern-jawed, has to make up her mind which of the two gentlemen she really loves, and as Mr. Andrews is a married man and such a successful lawyer he can only call round about once a week, and Mr. Fonda is a widower haunted by war-dreams and a feeling that everybody, including himself, is dead, it is no wonder that she vacillates. This film has moments when it seems probable that its chief characters are human beings, but it is odd, and indeed indicates a grave error somewhere, that one is able to sit for an hour and a half without caring a jot w7le her Miss Crawford returns to Mr.

It is fortunate that Mr. Jack Benny is proving in person to London audiences that he is a subtle and persuasive comedian, for in the film The Horn Blows at Midnight he is embarrassingly unfunny. As an angel sent down from heaven to blow the last trump he is plunged straight into slapstick, poor man, and spends a large part of the time swimming about in a coffee cup on a gigantic advertise- ment sign. Of verbal wit there is not a morsel, and Mr. Benny's brand of wry sophisticated humour is completely ignored. Why he should have bothered with this foolish affair I cannot imagine ; neither can I believe Messrs. Laurel and Hardy will be too pleased with him for trespassing on their custard-pie preserves.