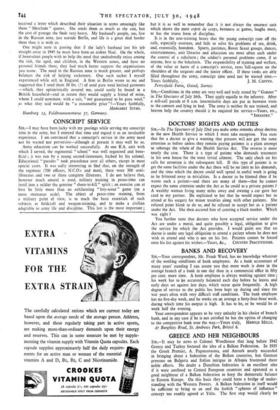 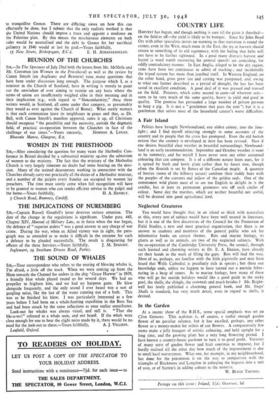 GREECE AND HER NEIGHBOURS

SIR,—It may be news to Colonel Woodhouse that long before 1942 Greece and Turkey fostered the idea of a Balkan Federation. In 1935 the Greek Premier, A. Papanastasiou, and Ataturk nearly succeeded in bringing about a federation of the Balkan countries, but German pressure on Bulgaria and Italian intrigue in Albania frustrated these noble efforts. No doubt a Danubian federation is an excellent idea if it were confined to Central European countries and operated as a good neighbour of a Balkan federation to keep the democratic balance in Eastern Europe. On this basis they could form a bridge of under- standing with the Western Powers. A Balkan federation in itself would be sufficient to bring to an end the foolish " spheres of influence " concept too readily agreed at Yalta. The first step would clearly be to tranquillise Greece. There are differing views on how this can effectually be done, but I submit that the only realistic method is that the United Nations should impose a truce and appoint a mediator on the Palestine plan. By this means the mischievous elements on both sides would be neutralised and the debt to Greece for her sacrificial gallantry in 1940 would at last be paid.—Yours faithfully, 15 New Street, Bishopsgate, E.C.2. E. H. ATHANASSOGLOU.