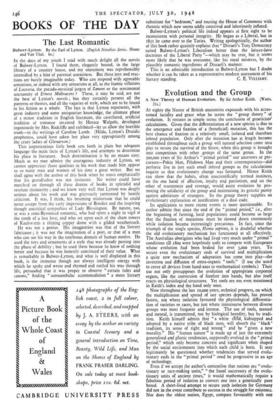 IN the days of my yOuth I read with much delight all the novels of Bulwer-Lytton. I found them, elegantly bound, in the large library of a country house, and my enjoyment was reprehensibly intensified by a hint of parental uneasiness. But these joys and reac- tions are barely imaginable today. Who can respond with agreeable sensations, or indeed with any sensations at all, to the frantic villainies of Lucretia, the pseudo-mystical jargon of Zanoni or the sentimental unctuosity of Ernest Maltravers ? These, it may be said, are not the best of Lytton's novels ; but they certainly present all the patterns or themes, and all the vagaries of style, which are to be found in his fiction as a whole. The fact is that Lytton represents, with great industry and some antiquarian knowledge, the ultimate phase of a minor tradition in English literature, the castellated, artificial tradition of romance invented by Horace Walpole, developed ingeniously by Mrs. Radcliffe and exhibited—let us allow the horrible truth—in the writings of Caroline Lamb. (Hilda, Lytton's Druidic prophetess, could have taken her place very appropriately among the crazy ladies of Glenarvon.)

This unpretentious little book sets forth in plain but adequate language the main facts of Lytton's life, and attempts to determine his place in literature. Such determination is by no means easy. Much as we may admire the courageous industry of Lytton, we cannot appreciate those qualities in his work that made him appear to so many men and women of his time a great writer. But we shall agree with the author of this book when he states emphatically that his grandfather was not insincere. No writer could have marched on through all these dozens of books in splendid and resolute insincerity ; and we know very well that Lytton was deeply serious about his work and was grievously tormented by hostile criticism. It was, I think, his besetting misfortune 'that he could never escape from the early impressions of Brocket and the inspiring though uncritical sympathies of Lady Blessington. By nature, too, :le was a semi-Byronised romantic, who had spent a night in vigil at the ,tomb of a lost love, and who set upon each of the sham towers of Knebworth a shining copper dome with a gilded weathercock.

He was not a genius. His imagination was that of the literary fabricator ; it was not the imagination of a poet, or that of a man who can see his way in the tenebrous domain of human motive. He used the toys and ornaments of a style that was already passing into the phase of debility ; but he used them because he knew of nothing better and because he was honestly convinced of their value. What is remarkable in Bulwer-Lytton, and what is well displayed in this book, is the immense though not always intelligent energy with which he spoke and wrote and rhymed and rattled his way through life, persuaded that it was proper to observe " certain rules and canons," finding " somnambular accommodation " a more literary

substitute for "bedroom," and rousing the House of Commons with rhetoric which now seems oddly contrived and laboriously inflated.

Bulwer-Lytton's political life indeed appears at first sight to be inconsistent with personal integrity. He began as a Liberal, but in 1851 he came over to the Tories. Writing apologetically, the author of this book rather quaintly explains that " Disraeli's Tory Democracy suited Bulwer-Lytton's Liberalism better than the laissez-faire doctrines of the Liberal Party "—which may be true, but it seems more likely that he was overcome, like his royal mistress, by the plausibly romantic ingredients of Disraeli's manner.

This is an admirable introduction to Bulwer-Lytton but. I doubt whether it can be taken as a representative modern assessment of his