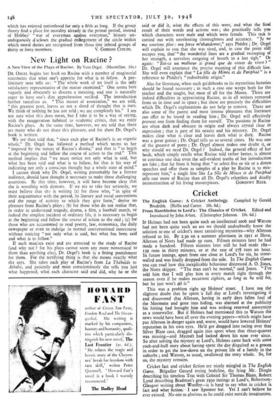 A New View of the Plays of Racine. By Vera Orgel. (Macmillan. 16s.) DR. ORGEL begins her bock on Racine with a number of magisterial statements that whet one's appetite for what is to follow. A pre- liminary note tells us: "The whole work of art itself is the only satisfactory representative of the matter examined." One seems here vaguely and obscurely to discern a meaning, and one is naturally eager to have one's dim apprehension verified. The introduction further tantalises us. " This master of association," .we are told, " this greatest poet, leaves us not a shred of thought that is ours. We think of nothing he has not told ; we are completely his." I am not sure what this does mean, but I take it to be a way of saying, with the exaggeration habitual to academic critics, that we enjoy Racine's plays. At the same time, however, we are told that there are many who do not share this pleasure, and for them Dr. Orgel's book is written.

We are then told that, " since each .play of Racine's is an organic whole," Dr. Orgel has followed a method which seems to her " imposed by the nature of Racine's drama," and that is " to begin at the beginning and follow the course of action to the end." This method implies that " we must notice not only what is said, but what has been said and what is to follow, for that is his way of indicating not only a conscious thought but a whole state of mind."

I cannot think why Dr. Orgel, writing presumably for a literate audience, should have thought it necessary to make these challenging assertions. By this time, however, it will have become clear that she is wrestling with demons. If we are to take her seriously, we must believe that she is writing (a) for those who, " in spite of their acquaintance with the period, its literary and social conventions and the range of activity to which they give form," derive no pleasure from Racine's plays ; (b) for those who do not realise that, in order to understand tragedy, drama, a film, a football match, or indeed the simplest incident of ordinary life, it is necessary to begin at the beginning and follow the course of action to the end ; (c) for those who are accustomed to read poetry, law, economics, the daily newspaper or even to indulge in normal conversational intercourse without noticing " not only what is said, but what has been said and what is to follow?'

If such maniacs exist and are attracted to the study of Racine (and why not ? for his plays cannot seem any more nonsensical to them than anything else), Dr. Orgel's book is a fining punishment for them. For the terrifying thing is that she means exactly what she says. She takes each play of Racine's from La Thebdide to Athalie, and patiently and most conscientiously she tells you just what happened, what each character said and did, why he or she said or did it, what the effects of this were, and what the final result of their words and actions was ; she practically tells you which characters were male and which were female. This task is

carried out with unrelenting thoroughness and accuracy. " ne me soutiens plus : ma force m'abandcmns'," says Phedre ; Dr. Orgel will explain to you that she was tired, and, in case the point still escapes you, that' the wonderful lines are a gradual recouping of her strength, a nerveless outgoing of breath to a last sigh." Or again: " Est-ce un malheur si grand que de cesser de vivre ?" Dr. Orgel will announce the precise meaning of this difficult line. She will even explain that " La fille de Minos et de Pasiphae" is a reference to Phedre's." redoubtable origin."

Alas for literature,- when such guidebooks to its mysterious beauties should be found necessary ; in such a case one weeps both for the teacher and the taught, but most of all for the Muses. There are indeed difficulties in appreciating Racine, as in all writers removed from us in time and in space ; but these are precisely the difficulties which Dr. Orgel's explanations do not help to remove. There are also some of the purest and most intense pleasures that literature can offer to be found in reading him ; Dr. Orgel will effectively prevent one from finding them for oneself. The passions in Racine are often dark and obscure in origin and always crystal clear in expression ; that is part of his neauty and his mystery. Dr. Orgel makes clear what is clear and leaves dark what is dark. Racine was a great genius ; Dr. Orgel tells us so several times. He was one of the greatest of poets ; Dr. Orgel almost makes one doubt it, or why should we need Dr. Orgel ? Indeed, the general effect of her book, which simply retells what Racine told rather better, is almost to convince one that even the self-evident truths of her introduction are fake ; that far from it being that " to select five or six or a dozen speeches and offer them as samples of a play by Racine is to mis- represent him," a single line like La fille de Minos et de Pasiphai tells one more of Racine than all Dr. Orgel's relentless and deadly reconstruction of his living masterpieces. GORONWY REES.