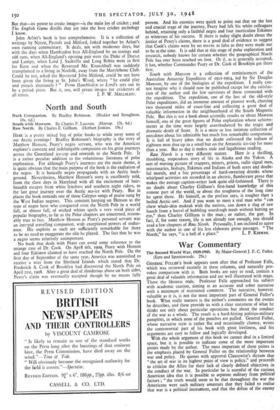 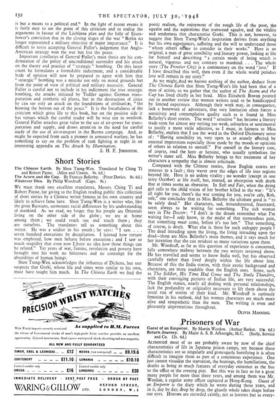 GENERAL- FULLER'S book appears soon after that of Professor Falls, which was reviewed recently in these columns, and naturally pro- vokes comparison with it. Both books are easy to read, contain a great deal of valuable information and are well illustrated with maps. There the likeness ends. Professor Falls approached his subject with academic caution, aiming at an accurate and sober narrative with a minimum of restrained comment. The narrative, however; valuable as it is, is not the most important part of General Fuller's book. What really matters is the author's comments on the events he describes, and these provide us with a clear statement of what he thinks not only about particular operations but about the conduct of the war as a whole. The result is a hard-hitting politico-military pamphlet, in which none of the punches are pulled. General Fuller, whose narrative style is rather flat and occasionally clumsy, writes the controversial part of his book with great liveliness, and his arguments are easy to follow and logically developed.

With the whole argument of this book we cannot deal in a limited space, but it is possible to indicate some of the more important points made by the author. The most important of these points is the emphasis. placed by General Fuller on the relationship between war and policy. He quotes with approval Clausewitz's dictum that " the art of war in its highest point of view is policy," and proceeds to criticise the Allies for their lack of clearly defined objectives in the conduct of the war. In particular he is scornful of the curious American idea that it is possible to separate military from political factors ; " the truth would seem to be that throughout the war the Americans were such military amateurs that they failed to realise that war is a political instrument, and that the defeat of the enemy

is but a means to a political end? In the light of recent events it is fairly easy to see the point of this criticism and to realise the arguments in favour of the Ljubljana plan and the folly of Eisen- hower's conviction that in the closing stages of the war " Berlin no longer represented a military objective of major importance." It is difficult to resist accepting General Fuller's judgement that Anglo- American strategy won the war but lost the peace.

Important corollaries of General"Fuller's main thesis are his con- demnation of the policy of unconditional surrender and his attack on the theory and practice of " strategic " bombing. On this latter count he formulates a formidable indictment, and a considerable body of opinion will now be prepared to agree with him that " strategic " bombing was a mistake not only on moral grounds but from _the point of view of political and military necessity. General Fuller is careful not to include in his indictment the true strategic bombing, the attacks initiated by Tedder against German trans- portation and synthetic oil plants, but in the destruction of cities he can see only an attack on the foundations of civilisaticn, " the blowing the bottom out of the peace." It is the forcefulness of the criticism which gives life to this book, but on the positive side it has virtues which the careful reader will be wise not to overlook. General Fuller attaches great value to the use of air-power for trans- portation and supply, and draws attent:on to the need for careful study of the use of air-transport in the Burma campaign. And, as might be expected from such a pioneer in armoured warfare, he has something to say on the problem of tank fighting at night in an interesting appendix on The Attack by Illumination.