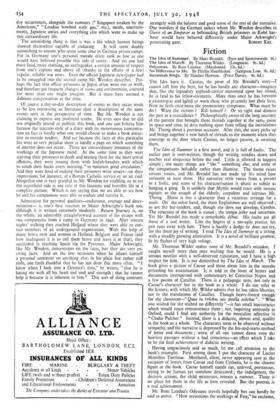 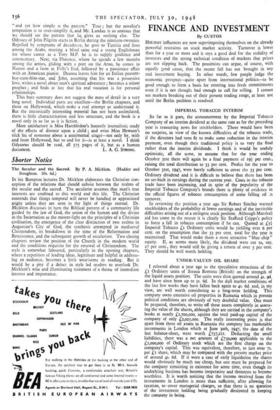 THE Ides have it. Cassius, the pivot of Mr. Brendel's story—I cannot call him the hero, for he has hardly any character—imagines that, like the legendary typhoid-carrier marooned upon her island, he is fatal to his fellow-creatures. More than once he has foreseen a catastrophe and failed to warn those who presently lost their lives. Now he feels once more the premonitory symptoms. What must he do ? Warn the victims ? Kill himself ? Or sit tight and dismiss the past as a coincidence ? Philosophically aware of the long ancestry of the pattern that brought those threads together at the same point in space and time, he does nothing apart from telling the incredulous Mr. Thring about a previous occasion. After this, the story picks up and brings together a new batch of threads to the moment when they converge at the door where Cassius, no longer passive, -is awaiting them.

The Ides of Summer is a first novel, and it is full of faults. The earlier part is over-written, though the writing steadies down and reaches real eloquence before the end. Little is allowed to happen simply ; too many things are " like " something else, and some of the comparisons befuddle rather than illumine. The theme raises serious issues, and Mr. Brendel has not made up his mind how seriously to treat them. His narrative style varies from a pavane to a frolic, and some of his characterisation is about as subtle as banging a gong. It is unlikely. that Myrtle would react with instant rapture to the assault of the elderly, corpulent and nervous Mr. Thring. Eloise is less a character than a vicarious revenge for a snub. On the other hand, the three Englishmen are well observed ; so are the bar-tenders, and, though she does not develop, Cynthia. The structure of the book is casual ; the tempo -jerky and uncertain. Yet Mr. Brendel has made a remarkable debut. His faults are all those of a real writer. Like the fingers of a too-agile pianist, his pen runs away with him. There is hardly a dodge he does not try, for the sheer- joy of writing. I read The Ides of Summer at a sitting, with a steadily growing admiration. It is a novel of brilliant promise, lit by flashes of very high voltage.

Mr. Thornton Wilder makes none of Mr. Brendel's mistakes. caught myself more than once wishing that he would. He is a serious novelist with a well-deserved reputation, and I have a high resPectior him. It is not diminished by The Ides of March. The book gives a picture of Caesar and those about him in the months preceding his assassination. It is told in the form of letters and documents interspersed with commentary by Cornelius Nepos and a few poems of - Catullus. There is a pedagogic note, not only in Caesar's character' but in the book as a whole. I do not refer to the history, with which Mr. Wilder admits that he has taken liberties, nor to the translations of Catullus. Though heavy-footed enough for the classroom—"Quae to volebas nee puella nolebat": " What you wished for she wished no differently "—it has small inaccuracies which would rouse remonstrance there ; nor, inquiring anxiously at Oxford, could I find any authority for the masculine adjective in " Clodia Pulcher." Instead, there is a didactic, almost arid, quality in the book as a whole. The characters seem to be observed without sympathy, and the narrative is depressed by the fits-and-starts method of letter and document ; worst of all one cannot damn even the heaviest passages without a bad conscience—an effect which I take to be the final achievement of didactic writing.

Having ungraciously said so much, let me call attention to the book's triumphs. First among them I put the character of Lucius Mamilius Turrinus. Mutilated, silent, never appearing save as the recipient of letters from Caesar and from Cytheris, he is the clearest figure in the book. Caesar himself stands out, unloved, portentous, trying to be human yet somehow desiccated ; the indulgences, the decisive actions, the child mistresses, remain a rumour. There is no place for them in the life as here revealed. But the portrait is a real achievement.

Mr. Rom Landau's Odysseus travels hopefully but can hardly be said to arrive. " How mysterious the workings of Fate," he exclaims, "and yet how simple is the pattern." True ; but the novelist's temptation is to over-simplify it, and Mr. Landau is so anxious that we should see the pattern that he`--gives us nothing else. The Odyssey of John Pilgrim starts in Berlin during the nineteen-twenties. Repelled by symptoms of decadence, he goes to Tunisia and lives among the Arabs, meeting a blind saint and a young Englishman for whose career as a Tory M.P. he is to supply guidance and commentary. Next, via Florence, where he spends a few months among the artists, gliding with a poet on the Arno, he comes to Nature and a farm at Folly's End, followed by a passionate affair with an American pianist. Deanna leaves him for an Italian peasant- boy-cum-film-star, and John, assuming that his was a possessive love, writes a novel about man's spiritual adventure ; becomes a minor prophet ; and finds at last that his real vocation is for personal relationships.

This bare summary does not suggest the mass of detail in a very long novel. Individual parts are excellent—the Berlin chapters, and those on Hollywood, which make a real attempt to understand it. But the intrinsically interesting material has not been assimilated, there is little characterisation and less structure, and the book is a novel only in so far as it is fiction. More satisfactory is Miss Hambledon's honestly journalistic study of the effects of divorce upon a child - and even Miss Hewson's slick bit of nonsense about a sentimental singer—not only by, with and from Hollywood, but to and for it—is at least a novel. I think Odysseus should be read, all 575 pages of it, but as a human