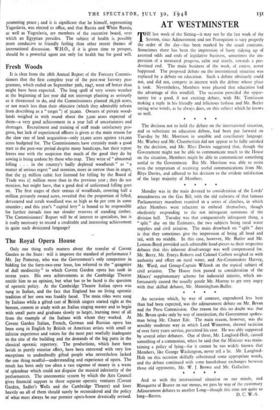 THE last week of the Sitting—it may not be the last week of the Session, since Adjournment and not Prorogation is very properly the order of the day—has been marked by the usual contrasts. Sometimes there has been the impression of hasty tidying up of assorted odds and ends of legislative business, sometimes the im- pression of a measured progress, calm and stately, towards a pre- destined end. The main business of the week, of course, never happened. The proposed debate on the international situation was replaced by a debate on education. Such a debate obviously could not, and did not, compete in interest with the debate whose place it took. Nevertheless, Members were pleased that education had the advantage of this windfall. The occasion provided the oppor- tunity for a good, if not exciting debate, with • Mr. Tomlinson making a reply in his friendly and felicitous fashion and Mr. Butler saying wise words, as he always does, on this subject which he knows so well.

The decision not to hold the debate on the international situation, and to substitute an education debate, had been put forward on Tuesday by Mr. Morrison in sensible and conciliatory language. Mr. Warbey and Mr. Chamberlain did not appear to be fully satisfied by the decision, and Mr. Rhys Davies suggested that, though the Government might not be able to communicate much to the House on the situation, Members might be able to communicate something useful to the Government. But Mr. Morrison was able to resist even the temptation of receiving useful communications from Mr. Rhys Davies, and adhered to his decision to the evident satisfaction of the large majority of Members.

Monday was in the main devoted to consideration of the Lords' amendments on the Gas Bill, with the old stalwarts of that famous Parliamentary marathon reunited in a series of clinches, in which other Members were reluctant to embroil themselves, though obediently responding to the not infrequent summons of the division bell. Tuesday was that comparatively infrequent thing, a " split " day on the Estimates, the two subjects being rural water supplies and civil aviation. The main drawback on " split " days is that they sometimes give the impression of being all head and tail, with no middle. In this case, however, Mr. Butler and Mr. Lennox-Boyd provided such admirable head-pieces to their respective debates that this inherent disadvantage was well compensated for. Mr. Berry, Mr. Emrys Roberts and Colonel Corbett weighed in with authority and effect on rural water, and Air-Commodore Harvey, Mr. Ward, and Group-Captain Wilcock on the topical subject of civil aviation. The House then passed to consideration of the Miners' supplementary scheme for industrial injuries, which un- fortunately caused the usually gentle Mr. Murray to get very angry with that skilled debater, Mr. Manningham-Buller.

* * * * An occasion which, by way of contrast, engendered less heat than had been expected, was the adjournment debate on Mr. Bevan and the Press Commission. One reason for this no doubt was that Mr. Bevan spoke only by way of interjection, the Government spokes- man being Mr. Chuter Ede. The main reason, however, was the sensibly moderate way in which Lord Winterton, shrewd tactician of over forty years service, presented his case. He was ably supported by several other debaters. One of these, Mr. Langford-Holt, caused something of a commotion, when he said that the Minister was main- taining a policy of lying—for it cannot be too widely known that Members, like George Washington, never tell a lie. Mr. Langford- Holt on this occasion skilfully substituted some appropriate words, and the debate continued with some knockabout exchanges between those old opponents, Mr. W. J. Brown and Mr. Gallacher.

And so with the international situation on our minds, and Blanquette of Beaver on our menus, we pass by way of the customary Adjournment debates to another Long—though this time not quite so