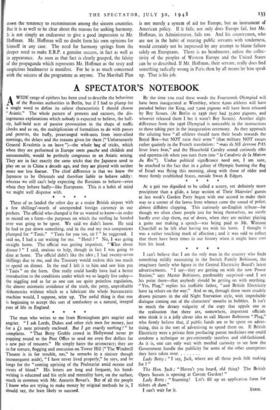 Three of us landed the other day at a major

British airport with a few shillings'-worth of unexpended foreign currency in our pockets. The official who changed it for us wanted to know—in order to record on a form—the purposes on which the sterling he handed over was going to be spent. We said we didn't know. He said he had to put down something, and in the end my two campanions plumped for " Taxis." " Taxis for you too, sir ? " he suggested. I said no, I had a car waiting for me. " Hotel ? " No, I was going straight home. The official was getting impatient. " What about dinner ? " I said, anxious to help, though in fact I was going to dine at home. The official didn't like the idea ; I had twenty-seven shillings due to me, and the Treasury would reckon this too much to spend on dinner. In the end I left it to him and saw him put " Taxis " on the form. One really could hardly have had a better introduction to the conditions under which we so lar,gely live today— the niggling and as far as one can see quite pointless regulation, the almost axiomatic avoidance of the truth, the petty, unprofitable dishonesties without which as a lubricant the whole bureaucratic machine would, I suppose, seize up. The awful thing is that one is beginning to accept this sort of tomfoolery as a natural, integral part of life in England.