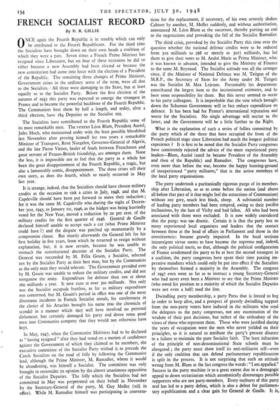 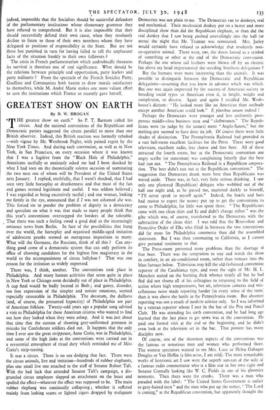 ONCE again the Fourth Republic is in trouble which can only be attributed to the Fourth Republicans. For the third time the Socialists have brought down on their own heads a coalition of which they were a part. Seven times a French Prime Minister has resigned since Liberation, but on four of these occasions he did so either because a new Assembly had been elected or because the new constitution had come into force with the election of a President of the Republic. The remaining three changes of Prime Minister, Government crises in the ordinary sense of the term, were all due to the Socialists. • All three were damaging to the State, but at least equally so to the Socialist Party. Before the first election of the autumn of 1945 this party was expected to emerge the strongest in France and to become the powerful backbone of the Fourth Republic. The Communists beat them by half a length, and today, after a third election, have 184 Deputies to the Socialist roz.

The Socialists have contributed to the Fourth Republic some of its most remarkable men. The veteran Leon Blum, President Auriol, Jules Moch, who maintained order with the least possible bloodshed last November after proving himself for two years a remarkable Minister of Transport, Rene Naegelen, Governor-General of Algeria, and the late Pierre Vienot, healer of feuds between Frenchmen and great servant of Franco-British friendship, are amongst them. None the less, it is impossible not to feel that the party as a whole has been the great disappointment of the Fourth Republic, a tragic, but also a lamentably comic, disappointment. The three crises tell their own story, as does the fourth, which so nearly occurred in May last year.

It is strange, indeed, that the Socialists should have chosen military credits as the occasion to risk a crisis in July, 1948. and that M. Capdeville should have been put forward to move their reduction ; for it was the same M. Capdeville who during the night of Decem- ber 31st, 1945, to January 1st, 1946, as the biidget was being hurriedly voted for the New Year, moved a reduction by 20 per cent. of the military credits for the first quarter of 1946. General de Gaulle declared himself unable to accept such a cut (what Prime Minister could have ?) and the dispute was patched up momentarily by a compromise clause. But shortly afterwards the General left for his first holiday in five years, from which he returned to resign without explanation, but, it is now certain, because he was unable to stomach the constitutional doctrine of the Socialist Party. The General was succeeded by M. Felix Gouin, a Socialist, selected not by the Socialist Party as their best man, but by the Communists as the only man they would tolerate. The Government presided over by M. Gouin was unable to reduce the military credits, and did not reorganise the army. Expenditure for defence then ran at about 16o milliards a year. It now runs at over 30o milliards. Not only was the Socialist escapade fruitless, as far as military expenditure was concerned, but M. Gouin's period in office was one of the most disastrous incidents in French Socialist annals, for carelessness in the choice of his Attaches brought his name into the chronicle of scandal in a manner which may well have involved no personal dishonour, but certainly damaged his party and drove some good men into Communist company that they would not otherwise have kept.

In May, 1947, when the Communist Ministers had to be declared as "having resigned" after they had voted on a motion of confidence against the Government of which they claimed to be members, the executive committee of the Socialist Party wished it. to precede the Czech Socialists on the road of folly by following the Communist lead, although the Prime Minister, M. Ramadier, whom it would be abandoning, was himself a Socialist. The committee was only brought to reconsider its opinion by the almost unanimous opposition of the Socialist Deputies. The folly which the Socialists had not committed in May was perpetrated on their behalf in November by the Secretary-General of the party, M. Guy Mollet (still in office). While M. Ramadier himself was participating in conversa-

dons for the replacement, if necessary, of his own severely shaken Cabinet by another, M. Mollet suddenly, and without authorisation, announced M. Leon Blum as the successor, thereby putting an end to the negotiations and provoking the fall of the Socialist Ramadier.

The third crisis, provoked by the Socialist Party this time over the question whether the national defence credits were to be reduced from 3ro milliards to 298 or merely to 3o12 milliards, has led them to give their votes to M. Andre Marie as Prime Minister, who, it was known in advance, intended to give the Ministry of Finance to the same M. Reynaud. The Socialist attitude was all the stranger since, if the Minister of National Defence was M. Teitgen of the M.R.P., the Secretary of State for the Army under M. Teitgen was the Socialist M. Max Lejeune. Presumably his department contributed the largest item to the incriminated estimates, and he bore some responsibility for them. But this never seemed to occur to his party colleagues. It is improbable that the vote which brought down the Schuman Government will in fact reduce expenditure on defence. It has been bad for France's international reputation and worse for the Socialists. No single advantage will accrue to the latter, and the Government will be a little further to the Right.

What is the explanation of such a series of follies committed by the party which of the three that have occupied the front of the French political stage since Liberation had much the longest political experience ? It is first to be noted that the Socialist Party congresses have consistently rejected the advice of the more experienced party leaders—Blum, Auriol (until he became President of the Assembly and then of the Republic) and Ramadier. The congresses have, even more than before the war, become the happy hunting-ground of inexperienced " party militants," that is the active members of the local party organisations.

The party undertook a puritanically rigorous purge of its member- ship after Liberation, so as to come before the nation (and above all before that part of it that might feel the attractions of Communism) without any grey, much less black, sheep. A substantial number of leading party members had been tempted, owing to their pacifist inclinations, by the lure of Vichy and had fallen. All who had been associated with them were excluded. It is now widely considered that the purge was too drastic. Certain it is that the party lost so many experienced local organisers and leaders that the contact between those at the head of affairs in Parliament and those in the constituencies. became gravely impaired. In the local sections intransigent virtue seems to have become the supreme and, indeed, the only political merit, so that, although the political configuration of France condemned the party to be at best the second strongest in a coalition, the party congresses have spent their time passing im- perative mandates which could only be put into effect if the Socialists by themselves formed a majority in the Assembly. The congress of 1947 even went so far as to instruct a young Secretary-General who had never even been a Minister to see that the Prime Minister (who owed his position to a majority of which the Socialist Deputies were not even a half) toed the line.

Dwindling party membership, a party Press that is forced to beg in order to keep alive, and a prospect of gravely dwindling support from the non-party voters have induced in the militants who send the delegates to the party congresses, not any examination of the wisdom of their past decisions, but rather of the orthodoxy of the views of those who represent them. Those who were justified during the years of occupation were the men who never yielded on their principles, so it is natural to attribute the party's present disaster to a failure to maintain the pure Socialist faith. The least infraction of the principle of non-denominational State schools must be abrogated ; the party must show itself its anti-militarist self—even if the only coalition that can defend parliamentary republicanism is split in the process. It is not surprising that such an attitude wrung from M. Blum at the last congress the words : "I am appalled." Success in the party machine is to a great extent due to a demagogic appeal to down sectarianism which automatically discourages possible supporters who are not party-members. Every outburst of this party zeal has led to a party defeat, which is also a defeat for parliamen- tary republicanism and a clear gain for General de Gaulle. It is,

indeed, impossible that the Socialists should be successful defenders of the parliamentary institutions whose elementary grammar they have refused to comprehend. But it is also impossible that they should successfully defend their own cause, when they resolutely decline to listen to those of their own members whom they have 'delegated to positions of responsibility in the State. But are not 'these last punished in turn for having failed to tell the unpleasant facts of the situation frankly to their own followers ?

The crisis in French parliamentarism which undoubtedly threatens its survival is therefore one of real significance. What should be the relations between principle and opportunism, party leaders and party militants ? From the spectacle of the French Socialist Party, Gaullists and Communists both hasten to draw morals satisfactory to themselves, while M. Andre Marie makes one more valiant effort to save the institutions which France so recently gave herself.