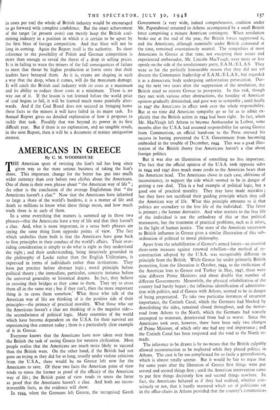 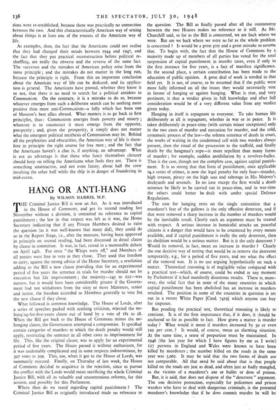 THE American sport of twisting the lion's tail has long since given way to the more serious business of taking the lion's share. This important change for the better has put into mu&t wider currency than ever before two clichés about the Americans. One of them is their own phrase about " the American way of life " ; the other is the conclusion of the average Englishman that " the Americans haven't a clue." Now that the Americans have inherited so large a share of the world's burdens, it is a matter of life and death to millions to know what these things mean, and how much truth there is in each of them.

In a sense everything that matters is summed up in those two phrases—that the Americans have a way of life and that they haven't a clue. And, what is more important, in a sense both phrases are saying the same thing from opposite points of view. The fact which underlies them both is that the Americans have gone back to first principles in their conduct of the world's affairs. Their over- riding consideration is simply to do what is right as they understand the right ; and their understanding, being intuitively grounded in the philosophy of Locke rather than the English Utilitarians, is expressed in terms of individuals rather than institutions. They have put practice before abstract logic ; moral principle before political theory ; the immediate, particular, concrete instance before the universal generality or historical dogma. In,fact, they believe in crossing their bridges as they come to them. They try to cross them all in the same way ; but if they can't, then the more important thing is to cross them somehow.' What those who talk of the American way of life are thinking of is the positive side of their principles—the primacy of practical morality. What those who say the Americans haven't a clue are thinking of is the negative side— the secondariness of political logic. Many countries of the world which have become dependent on the U.S.A. for their survival are experiencing that contrast today ; there is a particularly clear example of it in Greece.

In 1944, when the Germans left Greece, the 'recognised Greek

Government (a very wide, indeed comprehensive, coalition under Mr. Papandreou) returned to Athens accompanied by a small British force comprising a minute American contingent. When revolution broke out at the end of the year, the British forces suppressed it, and the Americans, although nominally under British command at the time, remained ostentatiously neutral. The sympathies of most Americans in Greece at that time, not excepting their astute and experienced ambassador, Mr. Lincoln MacVeagh, were more or less openly on the side of the revolutionary party, E.A.M./E.L.A.S. They were so for the perfectly honourable reason that they did not yet discern the Communist leadership of E.A.M./E.L.A.S., but regarded it as a democratic body undergoing authoritarian persecution. Dur- ing the next two years after the suppression of the revolution, the British tried to restore Greece to prosperity. In this task, though they met with various other obstructions, the hostility of American opinion gradually diminished, and gave way to sympathy ; until finally in 1947 the Americans in effect took over the whole responsibility. But at no time did American sympathy go so far as to admit ex- plicitly that the British action in 1944 had been right. In fact, when Mr. MacVeagh left Athens to become Ambassador in Lisbon, some months after the U.S.A. had assumed responsibility for saving Greece from Communism, an official hand-out to the Press stressed his success in having prevented the U.S. Government from becoming embroiled in the trouble of December, 1944. This was a good illus- tration of the British theory that Americans haven't a clue about, foreign politics.

But it was also an illustration of something no less important.' The fact that the official opinion of the U.S.A. took opposite sides in 1944 and 1947 does much more credit to the American heart than the American head. The Americans chose in each case, oblivious of inconsistency, to support the side which seemed to be in danger of getting a raw deal. This is a bad example of political logic, but a good one of practical morality. They may have made mistakes ; but they have not sacrificed their guiding principle which they call the American way of life. What this principle amounts to is that politics are secondary to the free life of the individual. The latter is primary ; the former derivative. And what matters to the free life of the individual is not the orthodoxy of this or that political manoeuvre, but the treatment of practical problems, each as it arises, in the light of human justice. The story of the American succession to British influence in Greece gives a similar illustration of this sub- ordination of political to moral philosophy.

Apart from the rehabilitation of Greece's armed forces—an essential short-term measure against renewed rebellion—the method of re- construction adopted by the U.S.A. was recognisably different in principle from the British. While Greece lay under primarily British protection, from the liberation in October, 5944, to the ratification of the American loan to Greece and Turkey in May, 1947, there were nine different Prime Ministers and about double that number of different Governments Meanwhile, the physical rehabilitation of the country had barely begun ; the fallacious identification of administra- tion with politics, and of Greece with Athens, seemed to be in danger of being perpetuated. To take two particular instances of recurrent importance, the Corinth Canal, which the Germans had blocked by demolishing the sides, remained closed throughout, and the motor- road from Athens to the North, which the Germans had scarcely, attempted to maintain, deteriorated from bad to worse. Since the: Americans took over, however, there have been only two changes of Prime Minister, of which only one had any real importance ; and the Corinth Canal has been reopened and the road to the North re- made.

The inference to be drawn is by no means that the British culpably, allowed reconstruction to be neglected while they played politics in Athens. The case is far too complicated for so facile a generalisation, which is almost totally untrue. But it would be fair to argue that for some years after the liberation of Greece first things were put second and second things first ; until the American intervention came to put first things decisively first and second things nowhere. In fact, the Americans behaved as if they had realised, whether con- sciously or not, that it hardly mattered which set of politicians sat in the office-chairs in Athens provided that the country's cornmunica-,

Lions were re-established, because there was practically no connection between the two. And this characteristically American way of setting about things is at least one of the sources of the American way of life.

As examples, then, the fact that the Americans could not realise that they had changed their minds between 1944 and 1947, and the fact that they put practical reconstruction before political re- shuffling, are really the obverse and the reverse of the same fact. The successes and the mistakes of American policy arise from the same principle ; and the mistakes do not matter in the long run, because the principle is right. From this an important conclusion about the American way of life can be deduced, and its applica- tion is general. The Americans have proved, whether they know it or not, that there is no need to search for a political antidote to Communism. On the contrary, it is a mistake to do so, because whatever emerges from such a deliberate search can be nothing more positive than mere anti-Communism—a folly which has been one of Moscow's best allies abroad. What matters is to go back to first principles, thus: Communism- emerges from poverty and misery ; whatever is to counteract it must emerge from the opposite, prosperity ; and, given the prosperity, it simply does not matter what the emergent political antithesis of Communism may be. Behind all the perplexities and obscurities, the American way of life is there- fore in principle the right course for free men ; and the fact that the Americans haven't a clue is, if anything, an advantage. What is not an advantage is that those who fancy themselves cleverer should keep on telling the Americans what fools they are. There is something unattractive, and not even funny, about half the crew insulting the other half while the ship is in danger of foundering in mid-ocean.