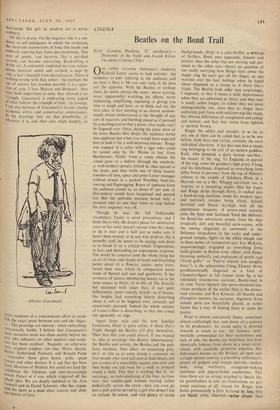 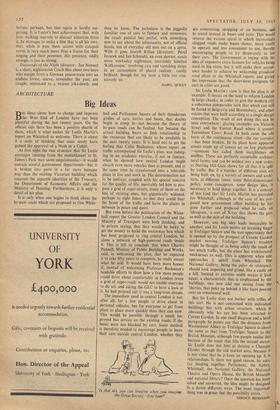 Beatles on the Bond Trail Help! .(London Pavilion; 'U' certificate.)— Diamonds of the Night and Joseph Kilian. (Academy Cinema Club.) ONE rather tiresome showman's tendency Richard Lester seems to lack entirely: the tendency to peer sidelong at the audience and see how it likes it. He not only lacks it, he does just the opposite. With the Beatles or without them,.he seems always the same: never waiting, never . (apparently) watching his effects, never explaining, amplifying, repeating or giving you time to laugh and hear, or to blink and see, the next joke; in fact seeming to an almost unshow- ' manly extent embarrassed at the thought of any sort of reaction, and hurtling ahead as if pursued by a snarling notion that a point, once made, can't be lingered over. Once, during the press show of his latest Beatles film Help!, the audience broke into applause just when you would have expected him to hold it for a well-deserved minute: Ringo. was trapped in a cellar with a tiger who could be tamed only by the 'Hymn to Joy' frdm Beethoven's Ninth; from a reedy whistle the sound grew to a bellow' through the manhole, as well-wishers upstairs joined in, then spread to the street, and then (with one of those lunatic transfers of time, space and point Lester manages without strain) to a packed Wembley Stad'um, roaring and flagwagging. Roars of applause from the audience joined in, as about 85 per cent of film-makers would have bargained and paused for. But the splendid moment lasted only a moment and no one had room to clap before the next sequence was off.

Though he uses the full . fashionable vocabulary, Lester is never pretentious,. and I think this is why. He doesn't pause for admiration (ours or his own), doesn't savour what he's done, or do it once and a half just to make sure it hasn't been wasted, or in any way prod us; this is butterfly stuff,,he seems to be saying, and dares. us to break it on a critical wheel. Unpompous, in fact, and demanding an unpompous response. The world he conjures (and the whole thing has an air of tricks and sleight-of-hand and disarming patter about it) is flimsier, zanier, more trans- lucent than ours, which by comparison seems made of flannel and suet and gumboots. It has moments of almost shimmering beauty (as in the snow scenes in Help!, or in bits of The Knack), but seasoned with jokes that, if not • quite deflationary, aren't exactly lyrical—as if beauty, like laughs, had something faintly disturbing about it, not to be lingered over, certainly not consciously pursued. Indeed the whole manner of Lester's films is disturbing, so that one conies out agreeably on edge.

Apart from style and the now familiar Lesterisms, Help! is quite unlike A Hard Day's Night, though the Beatles still play themselves. Their first film you could almost, if you wanted

to, take as sociology (the Beatles 'phenomenon,'' the Beatles and society, the Beatles and the pub- licity machine, their effect on screaming girls, etc.); or else as to some extent a comment on four people whd were still seen as individuals, not just corners of a monolithic square, who now and then broke out and went for a walk or pranced round a field. This film is nothing like it: no sociology, no individualising of the four, no fans save two middle-aged women waving rather

pathetically across the street—they can even go into, a pub and be served by a girl who doesn't bat an eyelash. In colour, and with plenty of exotic backgrounds, Help! is a joke-thriller, a send-up of thrillers, Bond ones especially, funnier and prettier than the other but not moving and per- sonal as the other was—there's no question of our really worrying how Ringo feels about the magic ring he can't get off his finger, as one worried over his hurt feelings when he loped about disguised as a tramp in A Hard Day's Night. The Beatles look older (not surprisingly, I suppose), so that it seems a mild impertinence when they are addressed as 'boys,' and their hair is surely rather longer; in colour they are more distinguishable, too, since they no longer have uniformly pale faces with uniform wig-like mops, but obvious differences of complexion and colour and texture, and hair that varies from lightish to darkish brown. , Ringo, the oddity and outsider, in so far as any one of them can be called that, is, as he was before, both hero and victim, certainly the .most individual character. A fan has sent him a magic ring belonging to the cult of an eastern goddess, Kaili, who demands a daily human sacrifice: the wearer of the ring. To England, in pursuit of the ring, come the goddess's high priest, Clang, and his henchmen, disguised as everything from pillar boxes to parsons; from the top of. Nelson's column to the middle of Salisbury Plain, in a Harrods van or a Mr. Whippy ice-cream van, in Aspreys or a recording studio, they lay traps; and Ringo drops through floors, is sucked into a hand-drying machine, meets his musical tiger, and narrowly escapes being sliced, halved, throttled and blown sky-high with all the appropriate weapons. A power-mad scientist joins the hunt and ScOtland Yard the defence; the Bond-like adventures mount, from the Alps (magically deft and beautiful snow-scenes, with the enemy disguised as snowmen) to the Bahamas (trap-doors in the rocks and under- ground temples, fights on the white shingle and in three inches of transparent sea). Leo McKern, unconvincingly disguised as everything from knife-grinder to British army officer, with flame- throwing umbrella and explosions of gentle rage ('Gosh golly!' or 'You've missed, you naughty boys!'), is the unfearsome Clang, Eleanor Broil, goodhumouredly disguised as a kind of Cleopatra-figure in full femme fatale fig, is his splendidly treacherous assistant, Beatle-mad in no time, Victor Spinetti (the nerve-shattered tele- vision producer of the earlier film) is the power- mad scientist, and Roy Kinnear, all thumbs and disruptive mutters, his assistant, Algernon. Even minute parts are beautifully played, or rather LeSter has a way of finding faces to make his points.

Help! is almost consistently funny, sometimes almost confusingly fast, and above all a contrast to its predecessor. Its social satire is directed inwards as much as out : for instance, senti- mentally commended for their naturalness and lack of side, the Beatles put latch-keys into four identically hideous front doors in a mean street, which, with carefully primitive exteriors like fishermen's houses on the Riviera, all open into a single opulent interior, a schoolboy millionaire's dream of gadgets and instant marvels—sunken

beds, rising wurlitzers, orangeade-making machines and pigeon-holed sandwiches. This time there are no strings attached to Beatle life, no grandfathers in tow, no frustrations, no per- sonal reactions at all; except for Ringo, who

looks permanently a little battered by fate, they are bland, crisp, cheerful—rather crisper than before, perhaps, but that again is hardly sur- prising. It is Lester's best achievement that, with four walking marvels to distract attention from it, he manages to make a film that is all his own, that, while it puts them across with catapult verve, is very much more than a frame for their singing and their presence. His presence, oddly enough, is just as strong. Diamonds of the Night (director: Jan Nemec) is a short, nightmarish Czech film about two boys who escape from a German prison-train into an endless forest, starve, remember the past, are caught, sentenced to a vicious joke-death, and then let loose. The technique is the jaggedly familiar one of cuts to fantasy and memories; the result painful but pitiful, with something new to say about the inhumanity, not of official fiends, but of everyday old men out on a spree. With it goes Joseph Kilian (directors: Pavel Juracek and Jan Schmidt), an even shorter, much more workaday nightmare, inevitably labelled 'Kafkaesque,' involving cats and vanishing shops in an atmosphere of placid realism: coolly brilliant, though for my taste a little too con- sciously so.