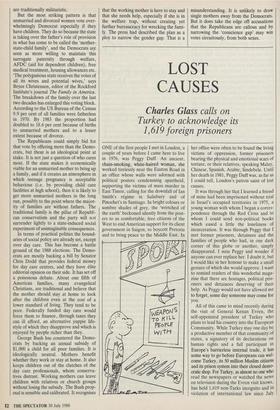 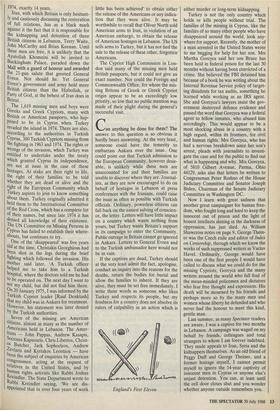 Turkey to acknowledge its 1,619 foreign prisoners

ONE of the first people I met in London, a couple of years before I came here to live in 1976, was Peggy Duff. An ancient, chain-smoking, white-haired woman, she worked tirelessly near the Euston Road in an office whose walls were adorned with political posters condemning apartheid, supporting the victims of mass murder in East Timor, calling for the downfall of Ian Smith's regime in Salisbury and of Pinochet's in Santiago. In bright colours or sombre shades of grey, the 'wretched of the earth' beckoned silently from the post- ers to us comfortable, free citizens of the West to end American support for its client government in Saigon, to boycott Pretoria and to bring peace to the Middle East. In her office were often to be found the living victims of oppression, former prisoners bearing the physical and emotional scars of torture, or their relatives, speaking Malay, Chinese, Spanish, Arabic, Sindebele. Until her death in 1981, Peggy Duff was, as far as I could tell, London's patron saint of lost causes.

It was through her that I learned a friend of mine had been imprisoned without trial in Israel's occupied territories in 1975, a young woman with whom I began a corres- pondence through the Red Cross and to whom I could send non-political books which eased a little the loneliness of incarceration. It was through Peggy that I met former prisoners, detainees and the families of people who had, in one dark corner of this globe or another, simply disappeared. I miss Peggy and wonder if anyone can ever replace her. I doubt it, but I would like in her honour to make a small gesture of which she would approve. I want to remind readers of this wonderful maga- zine that there are hostages, political pris- oners and detainees deserving of their help. As Peggy would not have allowed me to forget, some day someone may come for you.

All of this came to mind recently during the visit of General Kenan Evren, the self-appointed president of Turkey who plans to lead his country into the European Community. While Turkey may one day be a productive member of that community of states, a signatory of its declarations on human rights and a full participant in Europe's barrierless internal trade, it has some way to go before Europeans can wel- come Turkey, its 50 million Muslim citizens and its prison system into their closed demo- cratic shop. For Turkey, as almost no one who read the newspapers or watched the news on television during the Evren visit knows, has held 1,619 non-Turks incognito and in violation of international law since July

1974, exactly 14 years. Iran, with which Britain is only hesitant- ly and cautiously discussing the restoration of full relations, has as a black mark against it the fact that it is responsible for the kidnapping and detention of three British citizens in Lebanon, Terry Waite, John McCarthy and Brian Keenan. Until these men are free, it is unlikely that the Ayatollah Khomeini will be invited to Buckingham Palace, paraded down the Mall with a guard of honour and awarded the 21-gun salute that greeted General Evren. Nor should he. Yet General Evren's government and army hold more British citizens than the Hizbollah, or Party of God, at the behest of Iran does in Beirut.

The 1,619 missing men and boys were Greeks and Greek Cypriots, many with British or American passports, who hap- pened to be in Cyprus when Turkey invaded the island in 1974. There are also, according to the authorities in Turkish Cyprus, 300 Turkish Cypriots missing from the fighting in 1963 and 1974. The rights or wrongs of the invasion, which Turkey was entitled to undertake under the treaty which granted Cyprus its independence, are not at issue in the case of these hostages. At stake are their right to life, the right of their families to be told whether they are dead or alive and the right of the European Community which Turkey aspires to join to know something about them. Turkey originally admitted it held them to the International Committee of the Red Cross, which has a complete list of their names, but since late 1974 it has denied all knowledge of their existence. The UN Committee on Missing Persons in Cyprus has failed to establish their where- abouts, but continues to try. One of the 'disappeared' was five years old at the time. Christakis Georghious had been shot in the legs during the brief fighting which followed the invasion. His mother said later, 'A Turkish officer helped me to take him to a Turkish hospital, where the doctors told me he had to be operated on. The next day I went to see my child, but did not find him there. On 20 January 1975, I was informed by the Turkish Cypriot leader [Rauf Denktash] that my child was in Ankara for treatment. However, his statement was later denied by the Turkish authorities.

Seven of the missing are American citizens, almost as many as the number of Americans held in Lebanon. The Amer- icans — John Pappas, Andrew Kasapis, Socrates Kapsouris, Chris Libertos, Christ- os Butcher, Jack Sophocleos, Andrew Zevlaris and Kyriakos Leontiou — have been the subject of enquiries by American congressmen, acting at the request of relatives in the United States, and by human rights activists like Rabbi Joshua Kreindler. The State Department wrote to Rabbi Kreindler saying, 'We are dis- appointed that in over four years of work

little has been achieved' to obtain either the release of the Americans or any indica- tion that they were alive. It may be worthwhile to recall that Oliver North sold American arms to Iran, in violation of an American embargo, to obtain the release of American hostages in Lebanon. The US sells arms to Turkey, but it has not tied the sale to the release of these other, forgotten Americans.

The Cypriot High Commission in Lon- don said many of the missing men held British passports, but it could not give an exact number. Nor could the Foreign and Commonwealth Office, for whom the mis- sing Britons of Greek or Greek Cypriot origin appear to be an exceedingly low priority, so low that no public mention was made of their plight during the general's successful visit.

Can anything be done for them? The answer to this question is so obvious it hardly bears answering. At the very least, someone could have the temerity to embarrass Ankara over the issue. One could point out that Turkish admission to the European Community, however desir- able, is unlikely while these men are unaccounted for and their families are unable to discover where they are. Journal- ists, as they are now encouraged to do on behalf of hostages in Lebanon at press conferences with the Iranians, could raise the issue as often as possible with Turkish officials. Ordinary, powerless citizens can fall back on the easiest salving of conscien- ce, the letter. Letters will have little impact on a country which wants nothing from yours, but Turkey wants Britain's support in its campaign to enter the Community. Public outrage in Britain cannot go ignored in Ankara. Letters to General Evren and to the Turkish ambassador here would not be in vain.

If the captives are dead, Turkey should at the very least admit the fact, apologise, conduct an inquiry into the reasons for the deaths, return the bodies for burial and allow the families to inherit. If they are alive, they must be set free immediately. I write these words as someone who likes Turkey and respects its people, but my fondness for a country does not absolve its rulers of culpability in an action which is England's First Eleven either murder or long-term kidnapping.

Turkey is not the only country which holds or kills people without trial. The families of the missing in Cyprus, like the families of so many other people who have disappeared around the world, look any- where for support. Recently, the mother of a man arrested in the United States wrote to me begging for help for her son. Mrs Martha Gorcyca said her son Bruce has been held in federal prison for the last 30 months without having been convicted of a crime. She believed the FBI detained him because of a book he was writing about the Internal Revenue Service policy of target- ing dissidents for tax audits, something he learned while working as an IRS agent. She and Gorcyca's lawyers insist the gov- ernment destroyed defence evidence and passed the word that Gorcyca was a federal agent to fellow inmates, who abused him accordingly. This would appear to be a most shocking abuse in a country with a high regard, within its frontiers, for civil and human rights. Mrs Gorcyca, who has had a nervous breakdown since her son's arrest, pleads with journalists to investi- gate the case and for the public to find out what is happening and why. Mrs Gorcyca, of 5810 Gilbert Avenue, Parma, Ohio 44129, asks also that letters be written to Congressman Peter Rodino of the House Judiciary Committee and Senator Joseph Biden, Chairman of the Senate Judiciary Committee in Washington DC.

Now I learn with great sadness that another great campaigner for human free- dom, who fought long and hard to keep the innocent out of prison and the light of honest intellects shining in the darkness of oppression, has just died. As William Shawcross notes on page 9, George Thein- er was the Czech exile and editor of Index on Censorship, through which we know the works of such suppressed writers as Vaclav Havel. Ordinarily, George would have been one of the first people I would have called to discuss what we could do for the missing Cypriots, Gorcyca and the many writers around the world who fall foul of the mean-minded policemen and dictators who fear free thought and expression. His death will be mourned by his friends and perhaps more so by the many men and women whose liberty he defended and who never had the honour to meet this kind, gentle man. Last summer, as many Spectator readers are aware, I was a captive for two months in Lebanon. A campaign was waged on my behalf by friends, colleagues and total strangers to whom I am forever indebted. They made appeals to Iran, Syria and the kidnappers themselves. As an old friend of Peggy Duff and George Theiner, and a former hostage myself, I cannot permit myself to ignore the 14-year captivity of innocent men in Cyprus or anyone else's unjust detention. You can, at least until the cell door closes shut and you wonder whether anyone outside remembers you.