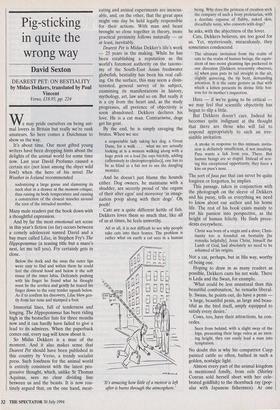 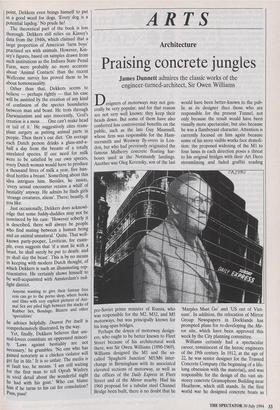 Pig-sticking in quite the wrong way

DEAREST PET: ON BESTIALITY by Midas Dekkers, translated by Paul Vincent Verso, £18.95, pp. 224 We may pride ourselves on being ani- mal lovers in Britain but really we're rank amateurs. So here comes a Dutchman to show us the way.

It's about time. Our most gifted young writers have been dropping hints about the delights of the animal world for some time now. Last year David Profumo caused a certain stir (not least among the shyer wild fowl) when the hero of his novel The Weather in Iceland recommended sodomizing a large goose and slamming its neck shut in a drawer at the moment critique, thus raising its body temperature and causing a constriction of the cloacal muscles around the root of the intruded member.

Many male readers put the book down with a thoughtful expression.

And by far the most emotional sex scene in this year's fiction (so far) occurs between a comely adolescent named David and a bay mare called Lilac, in Stephen Fry's The Hippopotamus (a teasing title but a mare's nest, let me tell you). Fry certainly gets in close.

Below the dock and the anus the outer lips were easy to find and within them he could feel the clitoral hood and below it the soft tissue of the inner labia. Delicately pushing with his finger he found what he thought must be the urethra and gently he traced his finger down to the easy tender squash below. As if to confirm his discovery, Lilac blew gen- tly from her nose and stamped a foot.

Immortal lines, full of tenderness and longing. The Hippopotamus has been riding high in the bestseller lists for three months now and it can hardly have failed to give a lead to its admirers. When the paperback comes out, every nag will know about it.

So Midas Dekkers is a man of the moment. And it also makes sense that Dearest Pet should have been published in this country by Verso, a trendy socialist press. Such fondness for the animal world is entirely consistent with the latest pro- gressive thought, which, unlike St Thomas Aquinas, sees no clear dividing line between us and the beasts. It is now rou- tinely argued that, on the one hand, meat- eating and animal experiments are inexcus- able, and, on the other, that the great apes might one day be held legally responsible for their actions. With man and beast brought so close together in theory, more practical proximity follows naturally — or at least, inevitably.

Dearest Pet is Midas Dekker's life's work — 25 years in the making. While he has been establishing a reputation as the world's foremost authority on the taxono- my of the South-East Asian freshwater globefish, bestiality has been his real call- ing. On the surface, this may seem a disin- terested, general survey of its subject, examining its manifestations in history, mythology, art, law and so on. But really it is a cry from the heart and, as the study progresses, all pretence of objectivity is soon abandoned. Dekkers declares his love. He is a cat man. Contrariwise, dogs get his goat.

By the end, he is simply savaging the brutes. When we see

a respectable lady taking her dog, a Great Dane, for a walk . . what we are actually looking at is a woman walking along with a huge prick on a lead [he says bitchily, adding (offensively to cheiropterophiles)], one has to be as blind as a bat not to see the dangling monster.

And he doesn't just blame the hounds either. Dog owners, he maintains with a shudder, are secretly proud of 'the organs of their alter egos' and moreover 'in imagi- nation poop along with their dogs'. Oh pooh!

Cats are a quite different kettle of fish. Dekkers loves them so much that, like all of us at times, he feels unworthy.

All in all, it is not difficult to see why people take cats into their homes. The problem is rather what on earth a cat sees in a human

it's amazing how little of a meteor is left after it bums through the atmosphere.' being. Why does the princess of creation seek the company of such a bony proletarian, with a desolate expanse of flabby, naked skin, dreadfully noisy, who consorts with dogs?

he asks, with the abjectness of the lover.

Cats, Dekkers believes, are too good for us. Yet, mysteriously, miraculously, they sometimes condescend.

The ultimate invitation from the realm of cats to the realm of human beings, the equiv- alent of two moist gleaming lips puckered in our direction [Dekkers reverently observes, is] when puss puts its tail straight in the air, slightly quivering, the tip bent, demanding attention. It is the same gesture as that with which a kitten presents its divine little bot- tom for its mother's inspection.

Here — if we're going to be critical we may feel that scientific objectivity has begun to slip a little.

But Dekkers doesn't care. Indeed he becomes quite indignant at the thought that there are those who will fail to respond appropriately to such an irre- sistible invitation.

A stroke in response to this intimate invita- tion is definitely insufficient, if not insulting. Puss wants a lick from you. There. But human beings are so stupid. Instead of seiz- ing this exceptional opportunity, they force a kiss on puss's nose.. .

The sort of faux pas that can never be quite forgiven or forgotten, he implies.

This passage, taken in conjunction with the photograph on the sleeve of Dekkers and his pussy, tells us everything we need to know about our author and his home life. The rest of his book exists mainly to put his passion into perspective, as the height of human felicity. He finds prece- dents everywhere.

Christ was born of a virgin and a dove; Chris- tianity too is founded on bestiality [he remarks helpfully]. Jesus Christ, himself the Lamb of God, had absolutely no need to be ashamed of his origins.

Not a cat, perhaps, but in His way, worthy of being one.

Hoping to draw in as many readers as possible, Dekkers casts his net wide. There is Leda and the Swan, for example.

`What could be less unnatural than this beautiful combination,' he remarks liberal- ly. Swans, he points out, do have a penis 'a large, beautiful penis, as large and beau- tiful as the bird itself, amply equipped to satisfy every desire.'

Cows, too, have their attractions, he con- cedSeen from behind, with a slight sway of the hips, presenting their large vulva at an invit- ing height, they can easily lead a man into temptation.

No doubt this is why his compatriot Cuyp painted cattle so often, bathed in such a golden, nostalgic light.

Almost every part of the animal kingdom is mentioned fondly, from eels (Shirley Conran sold herself short with her cele- brated goldfish) to the thomback ray (pop- ular with Japanese fishermen). At one point, Dekkers even brings himself to put in a good word for dogs. 'Every dog is a potential lapdog.' No prude he!

The theoretical part of the book is less thorough. Dekkers still relies on Kinsey's data from the 1940s, which claimed that a large proportion of American 'farm boys' practised sex with animals. However, Kin- sey's figures, based on samples drawn from such institutions as the Indiana State Penal Farm, were probably no more accurate about 'Animal Contacts' than the recent Wellcome survey has proved them to be about homosexuality.

Other than that, Dekkers seems to believe — perhaps rightly — that his case will be assisted by the creation of any kind of confusion of the species boundaries between man and beast. He trots through Darwinianism and says innocently, 'God's creation is a mess . . . One can't make head or tail of it.' He suggestively cites trans- plant surgery as putting animal parts in people. Then there's our diet. 'On average each Dutch person drinks a glass-and-a- half a day from the breasts of a totally unrelated species. If our need for milk were to be satisfied by our own species, every Dutch woman would have to produce a thousand litres of milk a year, five hun- dred bottles a breast.' Something about this Idea intrigues him. Besides, he insists, `every sexual encounter retains a whiff of bestiality' anyway. He admits he finds girls `strange creatures, aliens'. There; beastly, if you like.

Just occasionally, Dekkers does acknowl- edge that some fuddy-duddies may not be convinced by his case: 'However soberly it Is described, there will always be people who find mating between a human being and an animal unnatural.' Quite. That well- known party-pooper, Leviticus, for exam- ple, even suggests that `if a man lie with a beast, he shall surely be put to death: and Ye shall slay the beast'. This is by no means in keeping with modern Dutch thought, of which Dekkers is such an illuminating rep- resentative. He certainly shows himself to be well-acquainted with Amsterdam's red- light district.

he advises helpfully. Dearest Pet itself is Comprehensively illustrated, by the way. Yet, finally, Dekkers believes that am- mal-lovers constitute an oppressed minori- ty. 'Laws against bestiality are not necessary,' he grumbles. 'No one who has gained notoriety as a chicken violator will get far in life.' It is so unfair. The media is at fault too, he moans. 'I am still waiting for the first man to tell Oprah Winfrey in vivid detail about the wonderful night he had with his goat.' Who can blame him if he turns to his cat for consolation? Puss, puss!