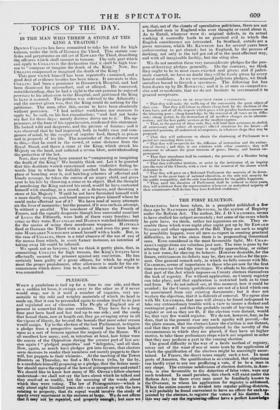 IS THE MAN WHO THREW A STONE AT THE KING A TRAITOR?

DENNIS COLLINS has been committed to take his trial for high trebson, under the 36th of GEORGE the 'third. This statute con- thins and perpetuates an old act of EDWARD the Third, desciibing the.offences which shall amount to treason. The only part which ea() jipply to COLLINS is the declaration that it shall be high trea- son to "compass or imagine the death of the King." Now, has COW Ns compassed or imagined the death of the King ? This poor wretch himself has been repeatedly ixamined, and a good deal of evidence besides has been taken. It amounts to this: COLLINS had been a pensioner in Greenwich Hospital, and had been dismissed for misconduct, real or alleged. Ile conceived, notwithstanding, that he had a right to the out-pension he enjoyed previous to his admission to the Hospital, and petitioned the King to have it restored. The petition was referred to the Admiralty ; and, the answer given was, that the King could do nothing for the petitioner. The man, after this, seems to have been absolutely without provision. " I had neither workhouse nor overseer to apply to, he said, on his last examination; " and had not broke my last fitr three days: merely distress drove me to it." His ap- pearance, at the time of his apprehension, confirmed this statement. He looked wild and desperate, and the picture of famine; and it was observed that he had improved, both in bodily ease and com-

posure of mind, by the con;fort of regular food, though in prison and in jeopardy of his life. The remainder of' the evidence went

to this,—that he stood in the crowd, at some distance from the Royal Stand, and threw a stone at the King, which struck his Majesty on the head, and inflicted a severe blow, notwithstanding the protection of the hat. Now, does any thing here amount to "compassing or imagining the death of the King:" We humbly think not. Let it be granted that this destitute wretch entertained some vindictive feeling to- wards him to whom he foolishly ascribed his destitution:—in place of brooding over it, and hatching schemes of effectual and bloody revenge, he takes the course of' an angry child, and gives vent to his bile by throwing a stone at its object. Had the thought

pr. murdelino- the King entered his mind, would- he have contented himself withstanding, in a crowd, at a distance, and throwing a

stone at his Majesty? Would he not have furnished himself with

a.more deadly weapon, and found means to place himself where he could make effectual use of it? We have read of many attempts the lives of monarchs; but the present, if it .was such an attempt, it without a pMallel. The muiderer of HENRY the Fourth of

France, and the equally desperate though less successful assailant of Louis the Fifteenth, were both of them crazy fimatics; but crazy as they mere, RAVAILLAC and DAMIEN watched deliberately for the means of using their murderous weapons. HATFIELD Bred at GEORGE the Third with a pistol ; and even the poor ma- niac MARGARET Nicuor,sox armed herself with a knife. But, in the case of' Co LEI NS, there is a total absence of the use of any of the means from which, in every former instance, an intention of taking away life could be inferred. • ' We speak not as lawyers; but we think it pretty plain, that, in CORIIIIiHing COLLINS for high treason, the King's lawyers have effectually secured the prisoner against any conviction. He has certainly been guilty of a great offence, for which be ought to meet the proper punishment, after allowance is made for the cir- cumstances which drove him to it, and his state of mind when it • was committed..