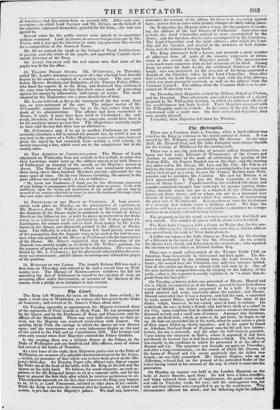 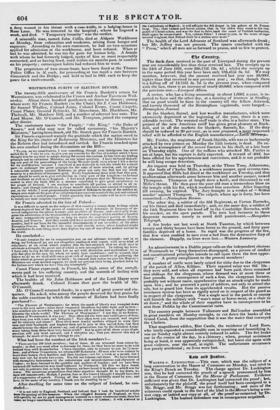 There was a Common Hall cn Tuesday, when a loyal address was voted to the King in relation to the recent outrage at Ascot. It was moved by Mr. Williams, and seconded by Mr. Stevens. At the same Hall, Mr. Richard Park and Mr. John Humpiny were chosen Sheriffs for the County of Middlesex for the ensuing year.

There was a meeting yesterday of persons calling themselves, we know not how truly, Electors of Westminster, at the Crown and, Anchor, to consider of the mode of celebrating the passing of the Reform Bills. Sir Francis Burdett was in the chair; and the meeting was addressed by Mr. Savage, Mr. Lee, and Mr. Pitt. Mr. Pitt is, we believe, the same person who presided at a meeting held a few years ago with a view to get up a party to oust Sir Francis Burdett from West- minster, and to introduce Mr. Canning. His zeal for Reform is at least questionable. Is Mr. Lee the High Constable, or the late lessee of Drury Lane ? Popular meetings are rendered ridiculous, and popular sentiments brought into contempt, by persons putting them- selves forward whom not one in a hundred of the fellow-electors knows any thing about ; and to whom not one in a thousand ever dreamt of delegating the right which they arrogate, of representing

the great city of Westminster. It is needless to state the resolutions of a meeting that nobody cares a farthing about. We hope the parishes will meet on an early day, and appoint Committees to arrange motions in an orderly and satisfactory manner.

The preparations for time grand entertainment at the Guildhall are very superb. Time number of guests will be about seven hundred.

The East India Company held a Court on Wednesday, for the pur- pose of addressing- his ?,lajesty ; and on the same day, a similar address was agreed to by the body of West India planters.

A ballot was taken at the India House on Tuesday, for time election of a Director in the room of time late Mr. Prescott. At six o'clock the glasses were closed, and delivered to the scrutineers ; who reported the election to have fallen on Richard Jenkin, Esq.

There was a grand sailing-match of the Thames Yacht Club -on Saturday, from Greenwich to Gravesend and back again. The dis-

tance was performed by the winning boat, the Lady Louisa, in .six hours; the second boat, the Victorine, was only two minutes behind. One of the yachts ran down a wherry with two men in it. One of

the men-narrowly escaped drowning by clinging to time bobstay of the yacht,—that is, the reporter learnedly explains it, to "a chain thatide- pcnds from the bowsprit."

On Tuesday, a lottery-ticket was presented at Messrs. Hazard and Co.'s, which, on examination of the books, proved to have been drawn a prize of 20,000/. ; the ticket purported to be a half. It was very much tattered and worn, especially about the number; and Messrs. Hazard contended that it was a forgery, and had the man, a carpenter by trade, named Bloice, held to bail as the forger. The story of the finder, which, however, he has varied, once at least, is curious. He undertook, he says, to bury a friend, who had been clerk at a wharf in the City, upon condition that he should receive whatever furniture the deceased owned, and a small sum of money. Amongst this furniture, was an old flock-bed ; which, as soon as he got home, he began to rip up. He had not proceeded far in his work, when he came across a piece of dirty paper folded up closely together; and in the paper he found an Abraham Newland Bank of England note for 10/. and two lottery_ tickets, the one a sixteenth, and the other the half-share in question. Upon taking the sixteenth to Bish's, where it appeared it had been purchased, he learned that it had been drawn a blank. The half-share was exactly in the condition in which he presented it at the office of Hazard and Co. The carpenter was brought up again on Thursday;

and after a low, examination,—in the course of which Mr. Durant, of the house of long and Co. swore positively that the ticket was

forged,—he was fully committed. Mr. Hughes Hughes, who sat as Alderman, refused bail, on the ground of the pretended finder of the ticket having varied in his account of the way in which it came into his possession.

On Monday, an inquest was held at the London Hospital, on the body of James Bander, aged forty. He had been a brass-moulder,

and -being reduced from want of employment, his goods were seized and sold on Thursday week, for rent; and the consequence was, his wife and four children were compelled to go to the workhouse. This circumstance affected his mind; and the following night he intlifteil a deep wound in his throat with a case-knife, in a lodging-house in Rose Lane. He was removed to the hospital ; where he lingered a week, and died. "Temporary insanity" was the verdict.

A miserable man, named John Collis, died at Aldgate Workhouse on Monday, from exhaustion and weakness, arising from hunger and exposure. According to his own statement, he had on two occasions applied for admission at the workhouse, and been refused. When at last he was admitted, he was too far gone for human help. A female with whom he had formerly lodged, spoke of him as most respectably connected, and as having lived, until within six months past, in comfort on his property ; extravagant habits had reduced him to want.

The proprietors of two steam-boats have been fined at the Thames Police Office in 51. each, for proceeding at too rapid a rate between Greenwich and the Bridge ; and held to bail in 100/. each to keep the peace for a twelvemonth.