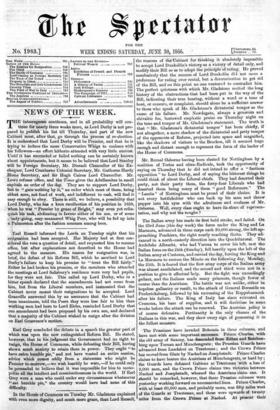 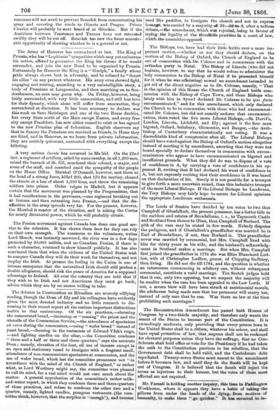 Page 1, 30 June 1866 — The Prussians have invaded Bohemia in three columns, and have
Close

The Prussians have invaded Bohemia in three columns, and have

met with some important successes. Prince Charles, with the old army of Saxony, has descended from Zittan and Roiehen- berg upon Turnau and Manchengratz ; the Prussian Guards have advanced from Landshut on Trantenau ; and the Crown Prince has moved from Glatz by Nachod on Josephstadt. Prince Charles claims to have beaten the Austrians at Miinchengratz, or hard by ; the Guards have defeated Gablenz at Trautenau with a loss of 3,000 men, and the Crown Prince claims two victories between Nachod and Josephstadt, whereof the Austrians claim one. It should be remarked, however, that these Prussian columns were yesterday working forward on unconnected lines. Prince Charles, with at least 60,000 men, and probably more, was fifty miles west of the Guards at 'Frautenau, and these were upwards of twenty miles from the Crown Prince at Nachod. At present their

successes will not avail to prevent Benedek from concentrating his army and covering the roads to Olmutz and Prague. Prince Charles will probably be next heard of at Gitschin. But if the Austrians between Trautenau and Turnau have not retreated swiftly they will be cut off. Benedek has now the finest conceiv- able opportunity of showing whether he is a general or not.