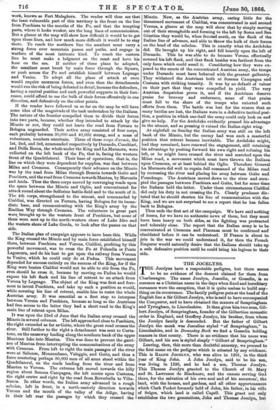 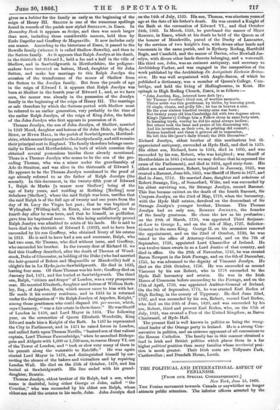 THE Jocelyns have a respectable pedigree, but there seems 1, to be no evidence of the descent claimed for them from Charlemagne. The name Jocelyn, Joscelin, or Gosselin, is so common as a Christian name in the days when fixed and hereditary surnames were the exception, that it is quite useless to build any- thing on its occurrence. The family pedigree puts at the head of the English line a Sir Gilbert Jocelyn, who is said to have accompanied the Conqueror, and to have obtained the manors of Sempringham and Tyringham, in Lincolnshire. It then gives him two sons, Gil- bert Jocelyn, of Sempringham, founder of the Gilbertiue monastic order in England, and Geoffrey Jocelyn, his brother, from whom the Jocelyn family is descended. But the father of Gilbert Jocelyn the monk was Josceline styled "of Sempringham," in. Lincolnshire, and in Domesday Book we find a Gosselin holding manors in that county. There is no evidence that his name was Gilbert, and his son is styled simply "Gilbert of Semptingham."

Leaving, then, this more than doubtful ancestry, we proceed to the first name on the pedigree which is attested by any evidence: This is RALPH Jocsi.vx, who was alive in 1201, in the third. year of King John. A John Jocelyn, said to be his son, was living in 1226, and he had a son, Thomas Jocelyn.. This Thomas Jocelyn granted to the Church of St. Mary and St. Lawrence de Blacknore, and the canons serving God there, for the salvation of his own soul and of his ancestors', the land, with the houses, and gardens, and all other appurtenances which Clerk Pecket formerly held of John, his father, in his villa of Selges, which land is called Capell. This grant not only establishes the two generations, John and Thomas Jocelyn, hut gives us a habitat for the family as early as the beginning of the reign of Henry III. SELGES is one of the numerous spellings found in records of the parish now styled SHELLOW, in Essex. In

Domesday Book it appears as Scelga, and then was much larger than now, including three considerable manors, held then by Eudo Daprifer and Geoffrey de Magnaville. It now includes only one manor. According to the historians of Essex, it passed to the BoweUs family (whence it is called Shellow-Bowells), and then to the Sutton family. As it appears that Ralph Jocelyn at his death, in the thirtieth of Edward I., held a fee and a half in the vile of Shellow, and in Sawbridgworth in Hertfordshire, the pedigree- makers have invented an heiress, Maud, daughter of Sir John Sutton, and make her marriage to this . Ralph Jocelyn the occasion of the transference of the manor of Shellow from the Sutton to the Jocelyn family. But from the proofs of age in the reign of Edward I. it appears that Ralph Jocelyn was born at Shellow in the fourth year of Edward I., and, as we have seen, the manor was already in the possession of the Jocelyn family in the beginning of the reign of Henry III. The marriage or sale therefore by which the Suttons parted with Shellow must be referred to an earlier generation, very probably to the time of the earlier Ralph Jocelyn, of the reign of King John, the father of the John Jocelyn who first appears in possession of it.

Thomas Jocelyn, the son of John Jocelyn, of Shellow, married in 1249 Maud, daughter and heiress of Sir John Hide, or Hyde, of HIDE, or HYDE HALL, in the parish of Sawbridgworth, Hertford- shire, which manor thus passed to theJocelynfamily, and still remains their principal seat in England. The family therefore belongs essen- tially to Essex and Hertfordshire, in both of which counties they obtained several possessions besides those already mentioned. There is a Thomas Jocelyn who seems to be the son of the pre- ceding Thomas, who was a minor under the guardianship of Ado de Stratton, and was alive in the thirteenth of Edward I. He appears to be the Thomas Jocelyn mentioned in the proof of age already referred to as the father of Ralph Jocelyn (the second). In this document, in the twenty-fifth year of Edward I., Ralph de Marks [a manor near Shellow] being of the age of forty years, and residing at Rothing [Roding] near Schelawe [Shellow], where the said Ralph was born, testifies that the said Ralph is of the fall age of twenty and one years from the day of St. Lucy the Virgin last past ; that he was baptized at Wylinghale [Willing-hall, in Essex, also near Shellow], on the fourth day after he was born, and that he himself, as godfather, gave him his baptismal name. On this being satisfactorily proved Ralph Jocelyn was admitted to seizin of his lands. He is said to have died in the thirtieth of Edward I. (1302), and to have been -succeeded by his son Geoffrey, who obtained livery of his estates in 1312. He is said to have had a son and successor, Ralph, who had two sons, Sir Thomas, who died without issue, and Geoffrey, who succeeded his brother. In the twenty-first of Richard II. we find this Geoffrey described, after the death of Thomas of Wood- stock, Duke of Gloucester, as holding of the Duke (who had married the heir-general of Bohun and Magnaville or Mandeville) half a nkight's fee in La Hyde-jurta-Sawbridgworth. He died in 1425, leaving four sons. Of these Thomas was his heir; Geoffrey died on January 2nd, 1471, and lies buried at Sawbridgworth. The third son, Ralph, "citizen and draper" of London, was a very prosperous man. He married Elizabeth, daughter and heiress of William Berk- ley, Esq., of Aspeden, Herbs, which manor came to hiai with her. He made it his country residence, and in 1434 he is returned under the designation of "Sir Ralph Jocelyn of Aspeden, Knight," among those gentlemen who could dispend 10/. per annum, which, says Chauncey, " was a fair estate in those times." He was Sheriff of Loudon in 1458, and Lord Mayor in 1464. The following year, on the coronation of Queen Elizabeth Woodville, King Edward made him a Kuight of the Bath. In 1467 he represented the City in Parliament, and in 1471 he raised forces in London, and sallied forth upon Thomas Neville, "bastard son of that valiant captain, Lord Thomas Fauconbridge," when he assaulted Bishops- gate and Aldgate with 1,600 or 1,700 men, to rescue Henry VI. out of the Tower of London, and "took or slew very many of them in his pursuit along the waterside to Ratcliffe." He was again elected Lord Mayor in 1476, and distinguished himself by cor- recting the abuses of the bakers and victuallers and by repairing London Wall. He died on the 25th of October, 1478, and lies buried at Sawbridgworth. His line ended with his grand- daughter, Beatrix.

Thomas Jocelyn, eldest brother of Sir Ralph, had a son, whose name is doubtful, being either George or John, called "the Courtier," who was succeeded by his eldest son Ralph, whose eldest son sold the estates to his uncle, John. John Jocelyn died on the 14th of July, 1525. His son, Thomas, was nineteen years of age at the date of his father's death. He was created a Knight of

the Bath at the coronation of Edward VI., and died October 24th, 1562. In March, 1555, he purchased the manor of HIGH RODING, in Essex, which at his death he held of the Queen as of the honour of Mandeville, parcel of the Duchy of Lancaster, by the services of two knight's fees, with divers other lands and tenements in the same parish, and in Eythorp Roding, Hartfeild Regis, and Canfield, and the manor of Davies, alias Newhall Jos- selyn, with divers other lands thereto belonging, and a watermill. His third son, John, was an eminent antiquary, and secretary to Archbishop Parker, and was engaged in the composition of the work published by the Archbishop De Antiquitate Ecclesite Britan- nicte. He was well acquainted with Anglo-Saxon, of which he

published a dictionary, was a member of Queen's College, Cam- bridge, and held the living of Hollingbourne, in Kent. His epitaph in High Roding Church, Essex, is as follows :-

Thrice noble was this gentleman, by blithe, by learning great, Of single, chaste, and godly life ; he has in heaven a seat.

He the year sixteen hundred twehty-nine was born ;

Not twenty years old him Cambridge did with two degrees adorn.

King's [Queen's] College him a Fellow chose in anno forty-nine, In learning tryde, worthy he did his mind always incline ; But others took the fame and praise of his discerning wit, And his inventions, as their own, in printing did commit ; Sixteen hundred and three it grieves all to remember, He left this life (poor's daily friend) the 28th December."

Richard Jocelyn, eldest brother of this meritorious but ill- appreciated antiquary, succeeded at Hyde Hall, and died in 1575. His eldest son, Richard, born in 1564, died in 1605, and was succeeded by his son, Robert, who was knighted ; was Sheriff of Hertfordshire in 1645 (whence we may deduce that he espoused the cause of the Parliament), and died in 1664, aged sixty-four. His eldest son and successor, Robert, baptized in January, 1623, was created a Baronet, June 8th, 1665, was Sheriff of Ilerts in 1677, and died in June, 1712. He married Jane, daughter and coheiress of Robert Strange, Esq., of Somerford, Wilts, and was succeeded by

his eldest surviving son, Sir Strange Jocelyn, second Baronet. This line became extinct on the death of the fourth Baronet, Sir Conyers Jocelyn, on the 23rd of May, 1778, when the baronetcy, with the Hyde Hall estates, devolved on the descendant of Sir Strange Jocelyn's younger brother, Thomas. This Thomas Jocelyn had an only son, ROBERT JOCELYN, the founder of the family greatness. He chose the law as his profession ;

on the 28th of March, 1726, was appointed Third Serjeant- at-Law to George I., and on the 4th of May, 1727, Solicitor- General to the same King. George H. on his accession renewed the appointment, and on the 22nd of October, 1730, he was raised to the office of Attorney-General, and on the 7th of September, 1739, appointed Lord Chancellor of Ireland. He was twelve times sworn in as a Lord Justice of that country, and died in office. On the 29th of November, 1743, he was created Baron Newport in the Irish Peerage, and on the 6th of December, 1755, he was advanced to the dignity of Viscount Jocelyn. He died on the 25th October, 1756. He was succeeded as second Viscount by his son Robert, who in 1778 succeeded to the Hyde Hall baronetcy and estates. He was in the Isiah House of Commons before succeeding to the Peerage, and on the 17th of April, 1750, was appointed Auditor-General of Ireland.

On the 9th of September, 1771, he was created Earl Roden of High Roding, in the county of Tipperary. He died June 22nd, 1797, and was succeeded by his son, Robert, second Earl Roden, who died on the 20th of June, 1820, and was succeeded by his son, Robert, third and present Earl Roden, who, on the 17th of July, 1821, was created a Peer of the United Kingdom, as Baron Claubrassil, of Hyde Hall.

The present Earl is well known in politics as being the recog- nized leader of the Orange party in Ireland. He is a strong Con-

servative in politics, and an extreme opponent of all concessions to the Roman Catholics. The family has in this manner obtained a lead in Irish and British politics which places them in a far higher political position than many families whose territorial posi- tion is much greater. Their Irish seats are Tollynore Park,