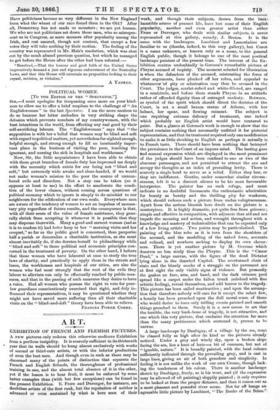 [To THE EDITOR OF THE "SPECTATOR."] SIR,—I must apologize for trespassing once more on your kind- ness to allow me to offer a brief respOnse to the challenge of "An Englishwoman" in the last Spectator. I am the more anxious to do so because her letter embodies in very striking shape the delusion which prevents numbers of my countrywomen, with the best intentions in the world, from effecting any real good by their self-sacrificing labours. The "Englishwoman" says that "the supposition is with her a belief that women may be blind and soft with regard to political matters, yet nevertheless far-sighted enough, helpful enough, and strong enough to fill an inestimably impor- tant place in the business of visiting the poor, teaching the ignorant, and nursing the sick in hospitals and workhouses."

Now, Sir, the little acquaintance I have been able to obtain with these great branches of female duty has impressed me deeply with the necessity which exists for our being not "blind and soft," but extremely wide awake and clear-headed, if we would not make woman's mission to the poor the source of unnum- bered evils and disorders. Not a step can be taken (so it appears at least to me) in the effort to ameliorate the condi- tion of the lower classes, without coming across questions of political economy which to ignore is simply to do mischief to our neighbours for the edification of our own souls. Everywhere men are aware of the tendency of women to act on impulses of momen- tary pity regardless of future results, and the consequence is that, with all their sense of the value of female assistance, they gene- rally shrink from accepting it whenever it is possible that they may dispense therewith. Many a good and earnest woman (sad as it.is to confess it) had better keep to her "morning visits and her croquet," so far as the public good is concerned, than pauperize half a parish or demoralize a charitable institution, as she must almost inevitably do, if she devotes herself to philanthropy while "blind and soft" to those political and economic principles con- cerned in the treatment of poverty. On the other hand, I believe that those women who have laboured at once to study the true laws of charity, and practically to apply them in the streets and lanes, the workhouses and hospitals of our cities, are also the women who feel most strongly that the root of the evils they labour to alleviate can only be effectually reached by public mea- sures, and that in the passing of such measures they desire to have a voice. Had all women who possess the right to vote for poor- law guardians conscientiously exercised that right, and duly in- fluenced their representatives, it may be questioned whether they might not have saved more suffering than all their charitable visits on the " blind-and-ioft " theory have been able to relieve.