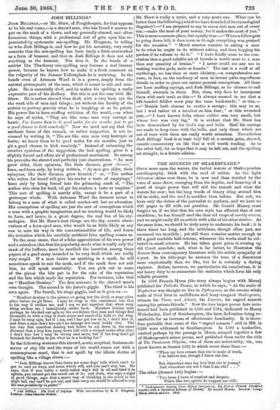 Joan BILLINGS,—or Mr. Shaw, of Poughkeepsie, for that appears to be his real name,—is a shrewd man, who has found it answer to put on the mask of a clown, and say generally shrewd, and often

humorous things, with a professional sort of grin upon him re- presented by systematic mis-spelling. Mr. Hingston, in telling us who j•osh Billings is, and how he got his notoriety, very truly remarks that the mis-spelling has been lately a little overworked as a form of humour, and that in Josh Billings it does not add anything to the humour. Nor does it. In the hands of • a satirist like Thackeray mis-spelling may become a real literary

power, because he knows how to make it a fresh comment on the vulgarity of the Jeames Yellow-plush he is satirizing. In the hands even of Artemus Ward it is a power, simply from the natural grotesquerie of the man, which it seems to suit and com- plete. He is essentially droll, and he makes his spelling a really

expressive part of his drollery. But this is not the case with Mr. Shaw. He is rather shrewd than droll, with a very keen eye for the weak side of men and things ; yet without the faculty of the satirist to portray gravely what he is laughing at as he paints. His power lies in keen scoffing criticism of the world,—as when

he says of mules, "They are like some men very corrupt at heart ; Tye known them to be good mules for six months just to get a good chance to kick somebody." Now we need not say that the sardonic force of this remark, or rather suggestion, is not in-

creased by writing it, " Tha are like sum men very korrupte at harte ; we know them tu be good males for six months, just tu git a good change to kick sumbody." Instead of enhancing the creative cynicism of the suggestion, the bad spelling gives it a slightly forced and effete air of professional merriment. So among his proverbs the shrewd and perfectly just observations, "As men

grow older, their opinions, like their diseases, grow chronic,"

This sort of spelling is merely silly, except it be a part of a grotesque whole. With Artemus Ward the humour seems to belong to a man of what is called mother-wit but no education.

His conceptions of spelling are just the sort of conceptions which a man with a graphic imagination and no teaching would be likely to form, and hence, in a great degree, the real fan of his ety- mologies. But Mr. Shaw's best things are the dry, caustic obser- vations of a keen-eyed man, who would be as little likely as any cue to miss his way in the conventionalities of life, and hence the irritation which his carefully artificial false spelling causes us. To the same cause, that of a false appreciation of his own power and a mistaken idea that his popularity needs what is really only the mask of the buffoon, must be ascribed the insertion among these papers of a good many intended to be very droll which are really very stupid. If a man insists on speaking in a mask, he will sometimes speak to suit the mask, and if the mask does not suit him, he will speak unsuitably. You can pick out in some of the pieces the bits put in for the sake of the reputation and the bits which made the reputation. For instance, take that on "Manifest Destiny." The first sentence is the shrewd man's own thought. The second is the jester's giggle. The third is his own again. The fourth, his stage giggle, and so it goes on :—

"Manifest destiny iz the science ov going tew the devil, or enny other place before ya git there. I may be rong in this centiment, but that is the way it strikes me, and i sin so put together that when enny thing strikes me i immejiately strike back. Manifest destiny mite perhaps be blocked out agin as the condishnn that man and things find themselfs in with a ring in their noses and sumboddy hold ov the ring. I may be rong agin, but if i am, awl i hay got tow sa iz, i don't kno it, and what a man don't kno ain't no damage tow enny boddy else. The tru way that manifess destiny had better be sot down iz, the exact distance that a frog ken jump down hill with a striped snake after him ; I don't kno but i may be wrong oast more, but if the frog don't git ketched the destiny iz jist what he iz a looking for."

In the following sentence this shrewd, acute, sceptical, business ob- server of city life and the ways of the world comes out with a contemptuous snarl, that is not spoilt by the idiotic device of spelling like a village clown :—

" 'Josh Billings knows that there are some dogs' tails which can't be got to curl no ways, and some which will, and you can't stop 'em. He says, that if you bathe a curly-tailed dog's tail in oil and bind it in splints, you cannot get the crook out of it ; and Josh, who says a sight of good things, says that a man's way of thinking is the crook in the dog's tail, and can't be got out, and that every one should be allowed to wag his own peculiarity in peace."

Mr. Shaw is really a cynic, and a very acute one. What can be better than the following (whiclfwe have denuded of its etymological disguise)?--."I am prepared to say to seven rich men out of every ten,—make the most of your money, for it makes the most of you." This is more common-place, but equally true:—" When a fellow gets to going down hill, it does seem as though everything was gretised for the occasion." "Moral suasion consists in asking a man to do what he ought to do without asking, and then begging his pardon if he refuses to do it," "I have finally come to the con- clusion that a good reliable set of bowels is worth more to a man than any quantity of brains." "I never could sea any use in making wooden gods, male or female." The last is a scoff at all mythology, no less than at mere idolatry,—a comprehensive sar- casm, in fact, on the tendency of men to invent quite superfluous details in order to piece out untrue general conceptions. All these are keen scoffing sayings, and Josh Billings, as he chooses to call himself, abounds in them. But, then, why does he intersperse them with such trash as this—" It always seemed to me that a left-handed fiddler must play the tune backwards ; " or this,- -" Musick bath charms tu soothe a savage ; this may be so, but i wed rather tri a revolver on him fast ; " or this wretched I have known folks whose calibre was very small, but whose bore was very big." It is evident that Mr. Shaw has been demoralized by his fool's cap and bells. Half his sayings are made to keep tuue with the bells, and only those which are out of tune with them are really worth attention. Nevertheless Josh Billings' book is at least half full of. a certain grim, shrewd, caustic commentary on life that is well worth reading. As to the other half, let us hope that it may be left out, and the spelling set straight, in a future edition.