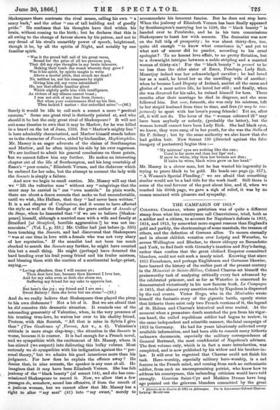 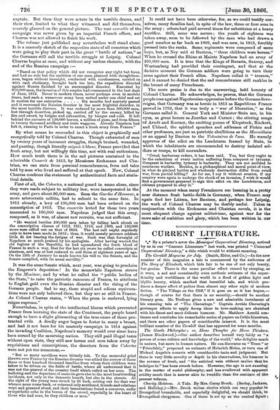 COLONEL CHARRAS, whose patriotism was of quite a different stamp from what his countrymen call Chauvinisme, tried, both as a soldier and a citizen, to account for Napoleon's defeats in 1813, 1814, and 1815, by somewhat more cogent reasons than England's gold and perfidy, the shortcomings of some marshals, the treason of others, and the defection of German allies. To mourn eternally and in almost childish vexation over Leipzig and Waterloo, to accuse Wellington and Blucher, to throw obloquy on Bernadotte and York, to find fault with Grouchy's inaction and Ney's daring, rather than confess that the great idolized Emperor committed blunders, could not suit such a manly mind. Knowing that since 1815 Frenchmen, and perhaps Englishmen and Germans likewise, have learned the history of the earlier part of the present century in the Memorial de Sainte-Helene, Colonel Charras set himself the praiseworthy task of analyzing critically every fact advanced by the celebrated prisoner, and as far as Waterloo is concerned he demonstrated victoriously in his now famous book, La Campagne de 1815, that almost every assertion made by Napoleon is disproved by the real events. Victor Hugo, who in the Miserables wrote himself the fantastic story of the gigantic battle, openly states that hitherto there exist only two French versions of it, the legend of St. Helena and Chaivas's historical and true recital. At the moment when a premature death snatched the pen from his vigor- ous hand, the exiled republican soldier had begun to review, in the same independent and scientific manner, the fatal campaign of 1813 in Germany. He had for years laboriously collected every available information, and had been able to consult many hitherto unknown documents, especially the military correspondence of General Bertrand, the most confidential of Napoleon's advisers. The first volume only, which is in fact a mere introduction, was completed, and is now published by his widow and his brother-in- law. It will ever be regretted that Charras could not finish his task. Hero-worship, especially military hero-worship, is a sad feature in the French mind, and coming from such an enthusiastic soldier, from such an uncompromising patriot, who knew how to address his countrymen, this unbending criticism would have told strongly. Gouvion Saint-Cyr and Mathieu Dumas have long ago pointed out the grievous blunders committed by the great

captain. But then-they were actors in the terrible drama, and their view, limited to what they witnessed and did themselves, scarcely glanced on the general picture. The vast ensemble of the

campaign was never given by an impartial French officer, and Charms was not allowed to finish his work.

The volume just published may nevertheless well stand alone. It is a masterly sketch of the respective state of all countries which were going to play their part in the great "battle of nations," as the Germans still call the terrible struggle at Leipzig. Colonel Charras begins at once, and without any useless rhetoric, with the end of the Russian campaign :-

"Based on that policy whioh did not recognize any right but force, and had no rule but the ambition of one man, planned with thoughtless- ness, begun without foresight, conducted with carelessness, carried on with rash obstinacy, brought back too late, the expedition directed against Russia finished by an unexampled disaster. Executed by 610,000 men, the invasion of this empire had commenced in the last days of June, 1812. Never in modern times, never perhaps even in ancient times, had such a numerous army been united under one chief and set

in motion for one enterprise Six months had scarcely passed and it recrossed the Russian frontier in the most frightful disorder, in the most terrible distress. It was reduced by more than 500,000 men, lost through desertion, picked up, carried off by the enemy, killed by fire and sword, by fatigue and exhaustion, by hunger and cold. It left behind the carcases of 150,000 horses, a million of guns, and from fifteen to twenty thousand artillery and train waggons. Already Napoleon had left it, running to Paris in order to exact a fresh army from Franco."

By what means he succeeded in this object is graphically and energetically told by Colonel Charras. Though exhausted of men

by twenty years of incessant struggles, though bruised, wounded, and panting, though literally saignie s blanc, France provided that fresh army, but not willingly this time, not with real enthusiasm.

How much truth there is in the sad pictures contained in the admirable Comscrit de 1813, by Messieurs Erckmann and Cha-

trian, we can state from personal remembrances, from sad tales told by men who lived and suffered at that epoch. Now, Colonel Charras confirms the statement by authenticated facts and statis- tical details.

First of all, the Calories, a national guard in name alone, since they were made subject to military law, were incorporated in the army, and gave about 90,000 men. Soon the Garde,s d'Honneur, a more aristocratic militia, had to submit to the same fate. In 1812 already, a levy of 100,000 men had been ordered on the conscription of 1813. The conscrits levied for these two years

amounted to 160,000 men. Napoleon judged that this army, composed, as it was, of almost raw recruits, was not sufficient.

"He wanted besides 100,000 men taken by falling back afresh on the conscription classes of 1812, 1811, 1810, and 1809, and 150,000 more men called out on that of 1814. The last call ought regularly only to have been made in 1815; thus, it could merely procure soldiers little fit for bearing the fatigue of war. Such was that foresight of Napoleon so much praised by his apologists. After having wasted the old legions of the Republic, he had squandered the fresh blood of France in such a way, that for the last six years he called conscripts at nineteen, and was at last reduced to call them at eighteen years of age. On the 13th of January he made known his will to the Senate, and the Senate complied, with its usual servility."

It was the same Senate which, next year, was going to proclaim

the Plmperor's deposition ! In the meanwhile Napoleon strove by the Moniteur, and by what he called the "public bodies of

the State," to raise the patriotic rancours of France, to attribute to English gold even the Russian disaster and the rising of the German people. Sad to say, these stupid and odious equivoca- tions were not only believed then, but they are so still in France.

As Colonel Charms states, "When the press is enslaved, lying reigns supreme."

Nevertheless, in spite of the intellectual blocus which prevented France from learning the state of the Continent, the people heard enough to have a slight glimmering of the true cause of these pro- tracted evils. A deadly anger began to fester in many a breast, and had it not been for his masterly campaign in 1814 against the invading Coalition, Napoleon's memory would ever since have been cursed by the mourning nation. They still paid illegal taxes without open riots, they still saw homes and men taken away by requisitions and conscriptions, the deserters from the Cokortes were not yet too numerous,—

"Bat so many sacrifices were bitterly felt. To the mournful grief thrown over France by the Russian disaster was added tho sorrow of those three or four hundred thousand families from whom their children were taken to be driven on the fields of battle, where all understood that it was not the quarrel of the country itself which called on her sons. The balloting and the departure of conscrits gave rise to the most heartrending incidents, not only at the domestic hearth, but also in the streets. At the sight of the young men struck by ill luck, setting out for that war whence none came back, or returned only mutilated, friends and relations wept and groaned aloud, and their lamentations found a sonorous, sadly sympathetic echo in the bosom of the crowd, especially in the heart of those who had sons, be they children or men."

It could not have been otherwise, for, as we could testify our- selves, many families had, in spite of the law, three or four sons in the army ; others had paid several times for substitutes at a heavy

sacrifice. Still, none was secure ; the youth of eighteen was taken away, soon to be followed by the man who had drawn a good number as far back as 1809, and was now, in 1813, forcibly pressed into the ranks. Some, regiments were composed of mere boys, but, as Ney said at Bautzen, "these children were heroes."

When he crossed the Rhine at Heintz Napoleon had an army of 269,000 men. It is true that the Kings of Bavaria, Saxony, and Wtutemberg had provided their contingent, and that at the decisive moment the German soldiers were going to turn their arms against their French allies. Napoleon called it "treason," and it cannot be denied that the sad remembrance still rankles in the breast of many Frenchmen.

The more praise is due to the unswerving, bold honesty of Colonel Charms. He acknowledges, he proves, that the German people rose against Napoleonian oppression before the German Sove- reigns, that Germany was as heroic in 1813 as Republican France proved in 1792, that it was truly a "war of liberation," as the

Germans called it. General York and Minister Stein are, in his eyes, as great heroes as Jourdan and Carnet; the stirring songs -of Arndt and Kcerner, the exciting poems of Klopstock, Riickert, and Uhlaud, the spirited speeches and addresses of Fichte and other professors, are just as patriotic ebullitions as the Marseillaise or an appeal by Danton to the Volontaires de Pans. He warmly

approves of the edict on the Landsturm framed by Stein, in which the inhabitants are recommended to destroy isolated sol- diers or troops, to kill marauders.

"Cruel, barbarous orders, it has been said. Yes, but they ought to be the catechism of every nation suffering from conquest or tyranny. Conquest is barbarity, tyranny is barbarity. They are not entitled to courteous warfare. Besides, in a philosophical and moral point of view, in what do pitched battles and wholesale destruction differ from retail war, from partial killing? As for me, I say it without evasion, if my country were again to undergo the shook of an invasion, I wish it would find a government prepared to sign this edict on the Landsturm, and citizens prepared to obey it."

At the moment when many Frenchmen see looming in a pretty near distance fresh battle-fields in Germany, when France may again find her Latzen, her Bautzen, and perhaps her Leipzig, the work of Colonel Charms may be doubly useful. Taken in conjunction with the Erckmann and Chatrian novels, it is the

most eloquent charge against mllitairisme, against war for the

mere sake of ambition and glory, which has hem written in our time.