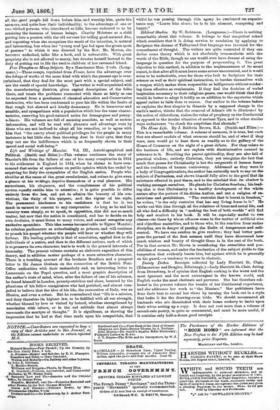 Biblical Studies. By W. Robinson. (Longmana.)--There is nothing remarkable about

this 'volume. It belongs to that exegetical school which considers that it is doing service to revelation by applying to Scripture the dictum of Talleyrand that language was invented for the concealment of thought. The writers are quite contented if they can devise some theory which is not absolutely irreconcilable with the words of the Bible, though no one would over have dreamt of using the language in question for the purpose of propounding it. The great objection to this method, in addition to the unpleasantness of its mount aspect, is that after all it mud leave some errors uncorrected, and it would seem to be undesirable, even for those -who look to Scripture for their science as well as their spiritual instruction, to burden themselves with a weapon which makes them responsible as belligerents without render- ing them effective as combatants. If they find the doctrine of verbal inspiration necessary to their religions pear*, one wouklishiniuthat they- would do better to adopt it boldly as an addition to the mysteries which, appeal rather to faith than to reason. Our author in the volume before us explains the first chapter in Genesis by a supposed change in tho earth's motion, thinks that the removal of Adam's rib is illustrated by the action of chloroform, stakes the value of prophecy on the Continental as opposed to the insular situation of ancient Tyro, and in other similar ways endeavours "to cheek the scepticism that abonnds."