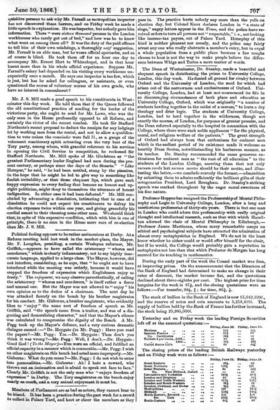 Mr. J. S. Mill made a good speech to his

constituents in West- minster this day week. He told them that if the Queen followed the old constitutional practice of sending for the leader of the victorious party, she ought to send for Mr. Lowe, who was the -only man in the House professedly opposed to all Reform, and certainly the victor of the recent combat. He took Sir Stafford Northeote's recent proposal to deduct the receipts for any lodgings let by working men from the rental, and not to allow a qualifica- tion to vote unless the remainder were full 71., as a gauge of the vehement reactionary spirit actuating even the very best of the Tory party, among whom, with graceful reference to his services in opening the Civil Service to competition, he reckoned Sir Stafford Northcote. Mr. Mill spoke of Mr. Gladstone as "the greatest Parliamentary leader England had seen daring the pre- sent century, or perhaps since the days of the Stuarts." "Like Hotspur," he said, "he had been nettled, stung by the pismires, in the hope that he might be led to give way to something like foolish irritability, or that those eloquent lips, which gave such happy expression to every feeling that became an honest and up- right politician, might deny- to themselves the utterance of honest indignation. In either case it had been defeated." Mr. Mill con- eluded by advocatitT a dissolution, intimating that in case of a dissolution he could not expect his constituents to defray his election expenses twice within one year, and giving gracefully his -cordial assent to their choosing some other man. We should think that, in spite of this expensive condition, which with him is one of principle, there is no man in the Heuse more sure of re-election than Mr. J. S. Mill.