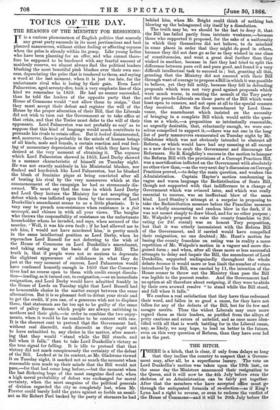 THE REASONS OF THE MINISTRY FOR RESIGNING.

IT is a curious phenomenon of English politics that scarcely any great party succeeds in its most pertinacious and best planned manceuvres, without either feeling or affecting coyness when the prize is already within its grasp. Like young ladies who have been planning for an offer, and who cannot there- fore be supposed to be burdened with any fearful amount of maidenly reserve, we almost always find the political leaders blushing the most beautiful pink blushes over their own suc- cess, depreciating the prize that is tendered to them, and saying a word at the last moment, when it is just too late, for the unfortunate rival who is losing by their gain. Even Lord Palmerston, aged seventy-five, took a very emphatic line of this kind we remember in 1859. He had no sooner succeeded, than he told the leaders of the opposite party that the House of Commons would "not allow them to resign," that they must accept their defeat and register the will of the House by the proper alteration of their Bill, that the Liberals did not wish to turn out the Government or to take office at that crisis, and that the Tories must defer to the will of their opponents. Lord Palmerston was not probably so nail as to suppose that this kind of language would much contribute to persuade his rivals to retain office. But it looked disinterested, and, moreover, there is probably in the minds of human beings of all kinds, male and female, a certain reaction and real feel- ing of momentary depreciation of that which they have long desired at the very moment of obtaining it. The coyness which Lord Palmerston showed in 1859, Lord Derby showed in a manner characteristic of himself on Tuesday night. He was not exactly maidenly in his Ministerial blushes, nor flushed and hoydenish like Lord Palmerston, but he blushed the blush of feminine pique at being convicted after all of beating his rival by the very manceuvre which at the commencement of the campaign he had so strenuously dis- owned. We must say that the tone in which Lord Derby and Lord Grey lecture the Ministry for not accepting the defeat which was inflicted upon them by the success of Lord Dunkellin's amendment seems to us a little pharisaic. It is very easy to preach non-resistance when resistance is a fait accompli, and chimes in with all your views. The burglar who throws the responsibility of resistance on the unfortunate householder whom he invaded, and says, when accused of the murder, Well, it was his own fault ; if he had allowed me to rob him, I would not have murdered him,' is pretty much in the same intellectual position as Lord Derby, when he reproaches Lord Russell for not deferring to the wish of the House of Commons on Lord Dunkellin's amendment, and taking rating as the basis of the new Bill. The truth is, that if people were not so anxious to deprecate the slightest appearance of selfishness in what they do just at the very moment of success, Lord Palmerston would have confessed honestly enough in 1859 that the Conserva- tives had no course open to them with credit except dissolu- tion—leading, as it turned out, to resignation,—or an immediate resignation, and Lord Derby would have admitted frankly in the House of Lords on Tuesday night that Lord Russell had no honourable choice in the matter except between the same alternatives. But it is so pleasant both to defeat your rivals and to get the credit, if you can, of a generous wish not to displace them, that statesmen are far too apt to be guilty of the same sort of paltry finesse which people are always satirizing in mothers and their girls,—in order to combine the two enjoy- ments, when it would be far manlier to be content with one. It is the sheerest cant to pretend that the Government had, without real discredit, such discredit as they ought not to have submitted to, any choice in the matter, after assert- ing that they would "stand while the Bill stands, and fall when it falls," than to take Lord Dunkellin's victory as the true signal for falling. It is idle to pretend that that victory did not mark conspicuously the certainty of the defeat of the Bill. Looked at in its context, as Mr. Gladstone viewed it on Tuesday night, it marked not so much the moment when reasonable men made up their minds that the Bill would not pass,—for that had come long before,—but the Moment when the last flickering hope of the most sanguine died out, when a high moral probability of defeat was exchanged for moral certainty, when the most sanguine of the political generals of division regarded the city as completely lost, when Mr. Forster could barely hold the gates against so feeble an assail- ant as Sir Robert Peel backed by the party of stormers he had behind him, when Mr. Bright could think of nothing but blowing up the beleaguered city itself by a dissolution.

The truth may be, we should be the last to deny it, that. the Bill has failed partly from intrinsic weakness,—because those who supported it proposed, for the sake of a uniformity in which they themselves did not believe, to do mischief in some places in order that they might do good in others,. because they did not dare go as far as they wished in one class. of constituencies, and went a great deal further than they wished in another, because in fact they had tried to split the difference between pure evil and pure good, and found it a very difficult intellectual task to succeed in ; but, granting all this,. granting that the Ministry did not succeed with their Bill through want of courage to propose aBill inwhich it was possible to believe, yet they fell nobly, because they fell in defending proposals which were not very good against proposals which were much worse, in resisting the assault of the Tory party and the pseudo-Liberals on those parts of the Bill which were least open to censure, and not open at all to the special censure they received. After the first amendment by Lord Gros- venor, the amendment which insisted on the necessity of bringing in a complete Bill which would settle the ques- tion as a whole,—a proposition so intrinsically reasonable,. so urgently desirable, that, reluctantly enough, we were our- selves compelled to support it,—there was not one in the long list of party manceuvres enumerated on Tuesday night by Mr. Gladstone which was not obviously intended to obstruct all Reform, or which would have had any meaning at all except as a new device to snub the Government and discourage the Reformers. Sir R. Knightley's success in the motion to hamper the Reform Bill with the provisions of a Corrupt Practices Bill, was a mortification inflicted on the Government with absolutely no other view than,—as the verynext day's discussion on Corrupt. Practices proved,—to delay the main question, and weaken the Administration. Captain Hayter's motion condemning in vague and warm language the Redistribution of Seats Bill,. though not supported with that indifference to a change of Government which was evinced later, and which was really essential to success, was an ineffectual blow of the same kind. Lord Stanley's attempt at a surprise in proposing to take the Redistribution measure before the Franchise measure. was a wholly unmeaning and random blow in the dark, if it was not meant simply to draw blood, and for no other purpose ; Mr. Walpole's proposal to raise the county franchise to 20/. rating (or 24/. rental) was an honest Tory proposition, but that it was utterly inconsistent with the Reform Bill of the Government, and if carried would have compelled their resignation, no one doubted ; Mr. Hunt's motion for basing the county franchise on rating was in reality a mere. repetition of Mr. Walpole's motion in a vaguer and more dis- guised form ; and when, after all these more or less successful attempts to delay and impair the Bill, the amendment of Lord Dunkellin, supported undisgaisedly throughout the whole debate because it would more or less limit the number of voters. introduced by the Bill, was carried by 11, the intention of the House sooner to throw out the Ministry than pass the Bill was legible to the poorest reader. And the Government had no option at all therefore about resigning, if they were to abide by their own avowed resolve "to stand while the Bill stood, and fall when it falls."

We confess a real satisfaction that they have thus redeemed their word, and fallen in so good a cause, for they have not fallen for any of the defects of the Bill, but for its few and meagre merits. Thus the widest Liberals may once more regard them as their leaders, as purified from the alloys of petty cautions and errors of unbelief, and as once more iden- tified with all that is worth battling for in the Liberal cause, nay, as likely, we may hope, to lead us better in the future, even on this very question of Reform, than they have ever led us in the past.