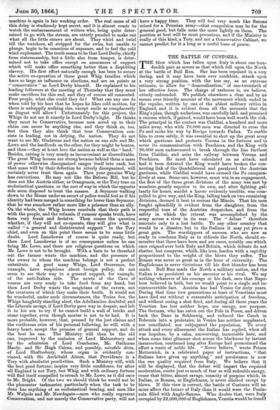 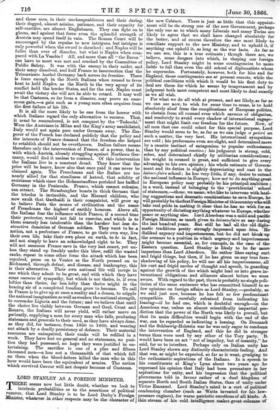 THE blow which has fallen upon Italy is about one hun- dredth part as severe as that which fell upon the North at the battle of Bull Run. She has been repulsed in a very daring, and it may have been over confident, attack upon a very strong position, with the loss say, as an extreme estimate, to allow for "demoralization," of one-twentieth of her effective force. The charge of rashness is, we believe, utterly unfounded. We publish elsewhere a clear and by no means over friendly account of the movement which ended in the repulse, written by one of the ablest military critics in England, and it is evident from all the accounts that the King's plan, though audacious, was carefully laid, and promised a success which, if gained, would have been well worth the risk. The principal in the contest was Cialdini, a hundred and more miles away, who with 70,000 men was directed to cross the Po and make his way by Rovigo towards Padua. To enable him to cross safely, it was essential to shut up the great army which garrisons and protects Verona in the fortress and to sever its communication with Peschiera, and the King with 90,000 men endeavoured to break through the line furthest from Cialdini, and seize the railway between Verona and Peschiera. He must have calculated on an attack, and had it been defeated the King would have broken the con- necting link of the Quadrilateral and paralyzed the Austrian garrisons, while Cialdini would have crossed the Po compara- tively at ease. Some one, however, must win in an engagement, the first of the three great divisions of the army was met by numbers greatly superior to its own, and after fighting gal- lantly for hours, amidst a havoc evidently terrible, was com- pelled to give way, and the King, falling back on two remaining divisions, deemed it best to recross the lifincio. That his men fought splendidly is evident from the slaughter, from the respectful tone of the Austrian despatches, and from the safety in which the retreat was accomplished by the army across a river in its rear. The " defeat " therefore amounts only to a lost battle. To any other country that would be a disaster, but to the Italians it may yet prove a great gain. The worshippers of success, who are now as ready to condemn Italy as to ridicule the North, should re- member that there have been and are races, notably one which once reigned over both Italy and Britain, which defeats do not shatter, but compress, which, like iron, harden with a rapidity proportioned to the weight of the blows they suffer. The Roman was never so great as in the hour of extremity. The Englishman is never victorious till his first blunder has been made. Bull Run made the North a military nation, and the Italian is as persistent as his ancestor or his rival. We say nothing whatever of his courage or his dash, save that Napo- leon believed in both, but we would point to a single and in- controvertible fact. Austria has had Venice for sixty years. During that time two generations at least of Venetians must have died out without a reasonable anticipation of freedom, and without seeing a shot fired, and during all those years the Venetian has lost neither hope, nor energy, nor purpose. The German, who has eaten out the Pole in Posen, and driven back the Dane in Schleswig, and reduced the Czech in Bohemia into a proletaire, in Venice has neither supplanted, nor conciliated, nor subjugated the population. To every attack and every allurement the Italian has replied, when all was hopeless, by a calm, unswerving, immutable hate, and when some faint glimmer shot across the blackness by instant insurrection, continued long after Europe had pronounced the effort a waste of noble life. "Never believe, wrote Prince Metternich, in a celebrated paper of instructions, "that Italians, have given up anything," and persistence is now the one quality required from Italy. We believe that it will be displayed, that the defeat will impart the required moderation, excite just so much of fear as will redouble energy, rouse that bitter, almost savage, tenacity of purpose which, in Italian, or Boman, or Englishman, is never elicited except by blows. If this view is correct, the battle of Castozza will no more affect the future of Italy than it would were the Penin- sula filled with Anglo-Saxons. Who doubts that, were Italy occupied by 22,000,000 of Englishmen, Venetia would be freed? and these men, in their unchangeableness and their daring, their dogged, almost asinine, patience, and their capacity for self-sacrifice, are almost Englishmen. They can fight on in gloom, and against that force even the splendid strength of Austria may spend itself in vain. The Roman Court will be encouraged by the repulse to new intrigues, but intrigue is only powerful when the sword is sheathed ; and Naples will be fuller than ever of disorder, but what is Naples when com- pared with La Vendee All, and more than all "the Baron" can have to meet was met and crushed by the Committee of Public Ba.fety. It was with the enemy in their midst, and their army dissolved, and half France in insurrection that the Triumvirate hurled Germany back across its frontier. There is force enough in the North Italians when roused to fever heat to .hold Naples, as the North in the very agony of its conflict held -the border States, and for the rest, Naples must await the victory she will not be able to retard. It may well be that Castozza, so far from a disaster, may prove an enor- mous gain,—a gain such as a young man often acquires from the first failure of his life.

It is all the more likely to be one from the horror with which Italians regard the only alternative to success. That, it must be remembered, is not conquest by the "Tedeschi." Were the Austrians in Milan and the King's army annihilated, Italy would not again pass under German sway. The Em- peror of the French has declared publicly that the policy and the interests of France demand that the freedom she helped to establish should not be overthrown. Italian failure means therefore only the intervention of France, of a power, that is, with which Austria, already struggling against Northern Ger- many, would find it useless to contend. Of this intervention the Italians live in a constant dread. They know that the price will be heavy, know also that once paid it can never be claimed again. The Frenchman and the Italian are too nearly allied for that steadiness of hatred, that solidity of resistance which since the Hohenstauffens perished has baffled Germany in the Peninsula. France, which cannot colonize, can attract. The Strasburgher boasts in thick German that the trioolor is invincible, and the Nizzard children, who now exult that Garibaldi is their compatriot, will grow up , to believe Paris the centre of civilization and the name of Frenchman the highest of earthly honours. Above all, the Italians fear the influence which France, if a second time their protector, would not fail to exercise, and which is to them scarcely less intolerable than the harsher but less de- structive dominion of German soldiers. They want to be a nation, not a prefecture of France, to go their own way, live their own life, take their own place on earth, to be in fact, and not siniply to have an acknowledged right to be. They will not summon France save in the very last resort, yet un- less they stand up frankly under this blow, refill the wasted ranks, repeat in some other form the attack which has been repulsed, press on to Venice as the North pressed on to Richmond, through defeat, and disease, and bankruptcy, this is their alternative. Their own national life will merge in one which they admit to be great, and with which they have some nuances of sympathy, but which is not theirs, is, if even loftier than theirs, far less lofty than theirs might in the bracing air of a completed freedom grow to become. To call in France is to give up at once a reality and a dream, to cripple the national imagination as well as weaken the national strength, to surrender Liguria and the future; and we believe that until the choice lies visibly between German and Gaul, Croat and Zouave, the Italians will never yield, will rather move on patiently, supplying a man for every man who falls, producing statesmen and generals to their need, as they have always done, as they did, for instance, from 3.850 to 1860, and wearing out attack by a deadly persistency of defence. Their material resources are unimpaired, their ranks will be refilled in a week. They have lost no general and no statesman, no posi- tion they had possessed, no hope they were justified in en- tertaining. The sacrifice is one of a plan and fifteen thousand men—a loss not a thousandth of that which fell on them when the blood-letters killed the man who in this hour would have been the equivalent of armies. The nation which survived Cavour -will not despair because of Custozza.