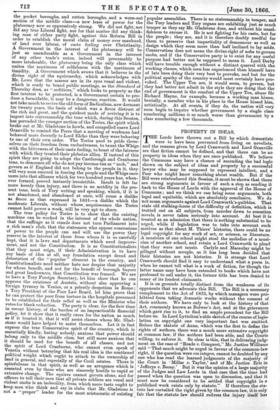 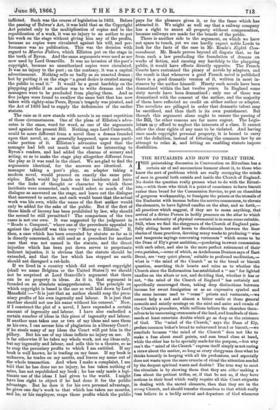 ?THE Lords have thrown out a Bill by which dramatists

were to have been prevented from living on novelists, and the reasons given by Lord Cranworth and Lord Granville are that fiction cannot be defined, and that there can be no property in ideas when they are once published. We believe the Commons may have a chance of amending the bad logic shown on the subject of ideas and property by a successful lawyer who may be supposed to represent intellect, and a Peer who might know something about wealth. But if the Bill were reintroduced this Session, it must be shown that there are strong arguments in favour of such a step as sending it back to the House of Lords with the approval of the House of Commons ; and we think we can bring some arguments, both legal and equitable, which are absolutely conclusive. We do not mean arguments against Lord Cranworth's quibbles. That stale old stalking-horse of the difficulty of definition, which is trotted out on all subjects, from murder down to sensation novels, is never taken seriously into account. At best it is treated as an admission that there is nothing substantial to be urged, while if legislation was to take into account such motives as that about M. Thiers' histories, there could be no legal copyright for any work of art, or science, or literature. A musician of one school might steal the melodies of a musi- cian of another school, and retain a Lord Cranworth to plead that they were not music. Carlyle and Macaulay might be pillaged without scruple, as it has long been decided that their histories are not histories. It is strange that Lord Cranworth should find it easy to understand what a poem is, when he cannot tell what is a work of fiction, for though the latter name may have been extended to books which have not professed to sail under it, the former title has been denied to many of its loudest claimants. It is on grounds totally distinct from the weakness of its opponents that we advocate this Bill. The Bill is a necessary complement to the Act of 1833, by which managers were pro- hibited from taking dramatic works without the consent of their authors. We have only to look at the history of that Act, commonly known as Bulwer's Act, and at the grievances which galilj rise to it, to find an ample precedent for the Bill before us. In Lord Lyttelton's able sketch of the course of legis- lation on copyright one very important fact was omitted. Before the statute of Anne, which was the first to define the rights of authors, there was a much more extensive copyright at common law, if the authors had been able, and the Courts willing, to enforce it. So clear is this, that in delivering judg- ment on the case of "Reade v. Conquest," Mr. Justice Williams said " That much might be urged in favour of the common-law right, if the question were res integra, cannot be doubted by any one who has read the learned judgments of the majority of the Court in 'Miller v Taylor,' and of Mr. Justice Erie in Jefferys v. Boosy.' But it was the opinion of a large majority of the Judges and Law Lords in that case that the time had passed when the question was open to discussion, and that it must now be considered to be settled that copyright in a published work exists only by statute." If therefore the sta- tute law curtailed the right given by the common law, it is only fair that the statute law should redress the injury itself has inflicted. Such was the course of legislation in 1833. Before the passing of Bulwer's Act, it was held that as the Copyright Act pointed only to the multiplication of copies and to the republication of a work, it was no injury to an author to put his work on the stage without giving him any of the profits, because no copies were circulated against his will, and per- formance was no publication. This was the decision with regard to Marino Faller°, which Elliston put on the stage in the teeth of Byron. And the same arguments were used as are now used by Lord Granville. It was no invasion of the poet's copyright, because no unauthorized copies were circulated. It was no injury to the poet ; on the contrary, it was a capital advertisement. Nothing sells so badly as an unacted drama ; bat by putting it on the stage "a great desire is created among the public to read it." It would be a great hardship on the playgoing public if an author was to write dramas and the managers were to be precluded from playing them. And as five judges were found to swallow the same bait that has now taken with eighty-nine Peers, Byron's tragedy was pirated, and the Act of 1833 had to supply the deficiencies of the earlier statute.

The case as it now stands with novels is an exact repetition of those circumstances. One of the pleas of Elliston's advo- cates is the same, word for word, as one of the arguments used against the present Bill. Nothing, says Lord Cranworth, could be more different from a novel than a drama founded upon that novel, or, as generally happened, upon some parti- cular portion of it. Elliston's advocates urged that the manager had left out much that would be interesting to Byron 's readers, and had added the charms of scenery and acting, so as to make the stage play altogether different from the play as it was read in the closet. We are glad to find the arguments identical, for the answers are identical. A manager taking a poet's play, an adapter taking a modern novel, would proceed on exactly the same prin- ciples. Each would lay hands on the incidents and leave out the links of thought or character by which those incidents were connected, each would select so much of the dialogue as answered on the stage, and leave out the dialogue that answered to nature, and each would boast that the actual work was his own, while the name of the first author would only be added for the sake of the public. But if the first of these kinds of larceny has been prohibited by law, why should the second be still permitted ? The comparison of the two cases is not our own. It was suggested by the judgment in " Reade v. Conquest," where one of the precedents appealed to against the plaintiff was this very "Murray v. Elliston." If, then, a case which has been overruled by statute so far as it is directly concerned, is still used as a precedent for another case that was not named in the statute, and the direct injustice which has been put down serves to perpetuate indirect injustice, it is obvious that the statute should be extended, and that the law which has stopped an earth should not disregard a rat-hole.

If we lived in a country which did not respect copyright (shall we name Belgium or the United States I) we should not be surprised at Lord Granville's argument that there can be no property in ideas. As it is, that argument is founded on an absolute misapprehension. The principle on which copyright is based is the one so well laid down by Lord Mansfield :—" It is just-that an author should reap the pecu- niary profits of his own ingenuity and labour. It is just that another should not use his name without his consent." Now, if I construct the plot of a novel, I have expended a certain amount of ingenuity and labour. I have also embodied a certain number of ideas in this piece of ingenuity and labour. If another man takes one or two of my ideas and uses them as his own, I can accuse him of plagiarism in a literary Court ; if he steals many of my ideas the Court will put him in the pillory. But his use of my ideas inflicts no injury on me. It is far otherwise if he takes my whole work, not my ideas only, but my ingenuity and labour, and sells this to a theatre, so as to reap the pecuniary profits to which I am entitled. If my book is well known, he is trading on my fame. If my book is unknown, he trades on my merits, and leaves my name out of the whole transaction. And when I make a complaint, I am told that he has done me no injury, he has taken nothing of mine, has not republished my book ; he has only made a legi- timate use of the ideas I had given to the world. I might have less right to object if he had done it for the public advantage. But he does it for his own personal advantage, he gives one day's work to that which has taken me months, and he, or his employer, reaps those profits which the public pays for the pleasure given it, or for the fame which has attracted it. We might as well say that a railway company has a right to annex all property without compensation, because railways are made for the benefit of the public. There is another side to the argument, on which we have not space to touch, yet we can hardly expect noble Lords to look for the facts of the case in Mr. Reade's Eighth Com- mandment. Mr. Reade proves beyond all dispute that, so far from such a law precluding the foundation of dramas on. works of fiction, and causing any hardship to the playgoing public, it would have effects directly opposite. The French. Courts have restrained the piracy of novels by adapters, and the result is that whenever a good French novel is published there is a good dramatic version of it, written in most in- stances by the author himself. Ninety such novels have been dramatized within the last twelve years. In England some sixty novels- have been dramatized ; only one of these was dramatized with the consent of the author, and the majority of them have reflected no credit on either author or adapter. The novelists are pillaged in order that dramatic talent may be sacrificed, and thus theft is its own punishment. But though this argument alone ought to ensure the passing of the Bill, the other reasons are far more cogent. The Legis- lature m ly afford to neglect the interests of a class. It cannot allow the clear rights of any man to be violated. And having once made copyright personal property, it is bound to carry out the definition, instead of fettering the common law by an attempt to relax it, and letting an enabling statute impose disabilities.