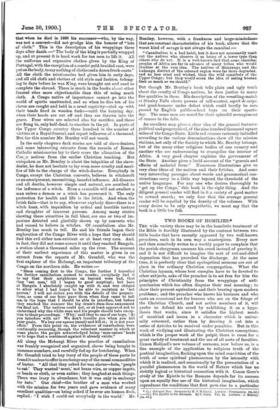 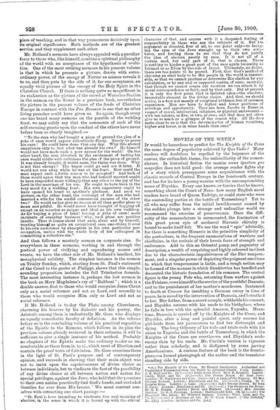 THE wide variety there may be in the homiletic treatment of the Bible is forcibly illustrated by the contrast between two little books that have recently appeared by two well-known preachers, each in its owis way a masterpiece. Every now and then somebody writes to a weekly paper to complain that the parish clergyman assumes his creed instead of proving it, and it is not difficult to imagine the sort of cut-and-dried dogmatism that has provoked the discharge. At the same time, it is perfectly clear that apologetical sermons are out of place in the ordinary Christian congregation. What the Christian layman, whose best energies have to be devoted to other subjects, asks of the preacher is to set free for him the principles of Christianity from the wrappings of anti- quarianism which too often disguise their real meaning ; to show their present equivalents and their bearing upon modern problems; and the preacher who knows his business and who casts an occasional net for hearers who are on the fringe of the Christian Church, and not active members of it, will prefer to defend his creed by exhibiting it as a hypo- thesis that works, since it satisfies the highest needs of mankind and issues in a character which is univer- sally esteemed, rather than by drawing it out into a series of Articles to be received under penalties. But in this work of vivifying and illustrating the Christian conceptions, which is the proper work of the pulpit, there is room for a great variety of treatment and the use of all sorts of faculties. Canon Holland's new volume of sermons, now before us, is a fine example of the application to religious truth of the poetical imagination, flashing upon the mind conviction of the truth of some spiritual phenomenon by the intensity with which it is realised, and occasionally by the presentation of a parallel phenomenon in the world of Nature which has no strictly logical or historical connection with it. Canon Gore's study of the Epistle to the Romans depends for its success upon an equally fine use of the historical imagination, which reproduces the conditionethat first gave rise to a particular

. . piece of teaching, and in that way pronounces decisively upon its original .significance. Both methods are of the greatest service, and they supplement each other.

Mr. Holland's sermons have always appealed with a peculiar. force to those who, like himself, combine a spiritual philosophy of the world with an acceptance of the hypothesis of evolu- tion. One of the most striking sermons in his present volume is that in which he presents a picture, drawn with extra- ordinary power, of the energy of Nature as science reveals it to us, and then puts by the side of it, for our acceptance, an equally vivid picture of the energy of the Holy Spirit in the Christian Church. If there is nothing quite so magnificent in its realisation as the picture of the crowd at Waterloo Station in the sermon on the Sower in a previous book, nevertheless the picture in the present volume of the feuds of Christian Europe in contrast with the Paz .Romana is one that no other living preacher could have given us. So again, though every one has heard many sermons on the parable of the wedding feast, we may safely say that the comments of each of the self-excusing guests upon the conduct of the others have never before been so clearly imagined :— "To the man who had bought a piece of ground the plea of a yoke of oxen would appear ridiculously flimsy. Merely to prove his oxen ! He could have done that any day. Why this absurd impatience only to test what was already his own ? He himself would not have made such a poor excuse for the world ! On the other hand, the man absorbed in the excitement of testing his oxen would riddle with criticisms the plea of the piece of ground. It was already bought, it would seem, the thing was done. Why is not that enough ? The buyer could go and see it later. It would not run away while he was at the feast. How could the man expect such a futile reason to be accepted ? And both of them would agree that the man who had himself married ought to have responded more willingly than any other to the joy of the Lord in the marriage of his son. He ought to have been in the very mood for a wedding feast. His own experience ought to have opened his heart to another's gladness. And need we picture, on the other hand, the contempt of the man who had married a wife for the sordid commercial excuses of the other two ? He would rather give no reason at all than proffer pleas so mean and pitiful. He would never have thought of begging off except on an occasion so unique and ideal as his own wedding. As for buying a piece of land! testing a yoke of oxen ! mere incidents of everyday business ! why, such pleas are positive insults. Thus it comes about that each, alone and by himself, treating himself as quite an exceptional case, smoothing it over to his own conscience by absorption in his own particular pre- occupation, unites with the whole body of his colleagues in committing a collective sin."

And then follows a masterly sermon on corporate sins. So everywhere in these sermons, working in and through the poetical power of vivifying and reproducing scenes and. events, we have the other side of Mr. Holland's intellect, his metaphysical subtlety. The simplest instance is the sermon on Trinity Sunday, which, starting from St. Paul's statement of the Creed to the gaoler at Philippi, shows that this simple. sounding proposition includes the full Trinitarian formula. The most interesting instance is, perhaps, the last sermon in the book on Mary Magdalene's cry of " Rabboni " ; which is a double answer, first to those who would recognise Jesus Christ only as a social reformer and not as Lord, and secondly to those who would recognise Him only as Lord and not as social reformer.

If Mr. Holland is to-day the Plato among Churchmen, charming his hearers by his dialectic and his poetry, the Aristotle among them is undoubtedly Mr. Gore, who displays an equally remarkable faculty of definition. As the volume before us is the concluding volume of his practical exposition of the Epistle to the Romans, which follows in its plan the previous volume already reviewed in these columns, it will be sufficient to give a single instance of his method. Probably no chapters of the Epistle make the ordinary reader so un- comfortable as those from ix. to xi., which treat of Election and contain the proof texts of Calvinism. Mr. Gore examines these in the light of St. Paul's purpose and of contemporary opinion, and succeeds in showing that their main object was not to insist upon the capriciousness of divine choice as between individuals, but to vindicate the fact of the possibility of any divine choice at all between nation and nation for special privileges, against the Jews, who held that the promises to their own nation practically tied God's hands, and excluded Gentiles for ever from His favour. • We must content our- selves with extracting one short passage " St. Paul is here intending to vindicate the real meaning of election, in the sense in which it is bound up with the ethical character of • God, and carries with it a deepened feeling of responsibility in those who are the subjects -of it. But his • argument is directed, first of all, to one point only—to .bring- ing the eyes of the Jews straight up to their own scrip- tures, and forcing them to see that they do not justify. the idea of election purely by race. It is not all of a • certain seed, but only part of it, that is chosen. There is nothing to hinder a great part of the race again becoming as Ishmael or as Edom by the side of Israel. Ultimately, no doubt, there are two points to be proved. First, that God's method of choosing an elect body to be His people in the world is inscrut- able, so that we cannot produce or determine His election by any calculation, or by any real or supposed merits, of ours; secondly, that though we cannot create our vocation we can retain it by moral correspondence or faith, and by that only. But at present it is only tbe first point that is insisted upon—the absolute. inscrutable element in the divine choice. And that, we should notice, is a fact not merely of scriptural evidence, but of common experience. Men are born to higher and lower positions of privilege and opportunity. They are born Jacobs or Esaus in respect of moral, intellectual, religious, or physical endowment— with ten talents, or five, or two, or one ; and God does not' often give us so much as a glimpse of the reason why. All He does make clear to us is that the determination of human vocations, higher and lower, is in wiser hands than ours."