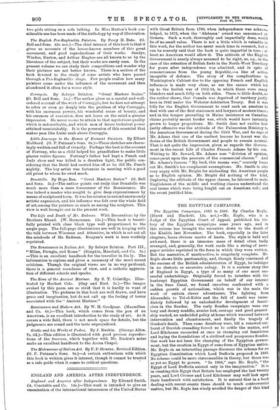 ENGLAND AND AMERICA AFTER INDEPENDENCE.

England and America after Independence. By Edward Smith. (A. Constable and Co. 14s.)—This work is intended to give an examination of the international intercourse of the United States

with Great Britain from 1783, when independence was acknow. ledged, to 1872, when the < Alabama ' award was announced at Geneva. Such a work, thoroughly and impartially done, would be of no small value. There is not a little which is valuable in this work, for the author has spent much time in research, but it can be scarcely said that the book is quite impartial in tone ; at least no American would allow it. The attitude of the English Government is nearly always assumed to be right, as, e.g., in the case of the retention of British forts in the North-West Territory for years after independence was admitted, and in spite of remonstrances from the young Republic,—a line of action incapable of defence. The story of the complications in Washington's Cabinet due to the opposing French and English influences is made very clear, as are the causes which led up to the foolish war of 1812.14, in which there were many blunders and much folly on both sides. There is little doubt, as the author shows, that Canada was deprived of territory justly hers in 1842 under the Webster-Ashburton Treaty. But it was folly for the English Government to send such an amateur to deal with one of the first statesmen and lawyers of modern times ; and in the temper prevailing in Maine insistence on Canadian claims probably meant border war, which would have instantly grown to larger proportions. Mr. Smith does not realise how justly offensive was the attitude of the Palmerston Ministry to the American Government during the Civil War, and he says of Mr. Adams that one of the earliest lessons he learnt was the desire of the British Government and people to remain neutral. That is not quite the impression given as regards the Govern- ment in the recent Life of Charles Francis Adams by his son. Writing to Mr. Seward, Mr. Adams sees "division of opinion, consequent upon the pressure of the commercial classes." And Mr. Adams's famous "My lord, this means war," scarcely bears out Mr. Smith's too complacent assumptions. Mr. Smith is also very angry with Mr. Bright for misleading the American people as to English opinion. Mr. Bright did nothing of the kind, Deploring the attitude of the upper classes, he laboured to make Englishmen of the middle and working classes understand the real issues which were being fought out on American soil ; and the event justified him.