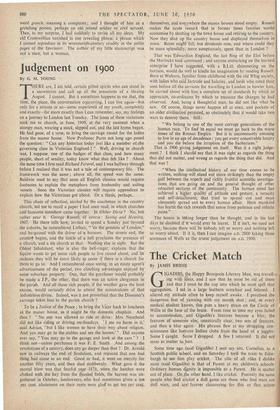 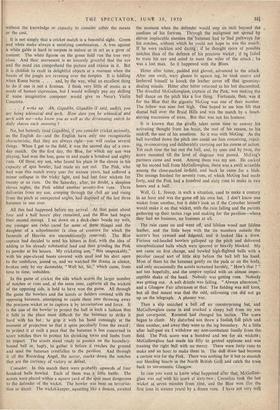 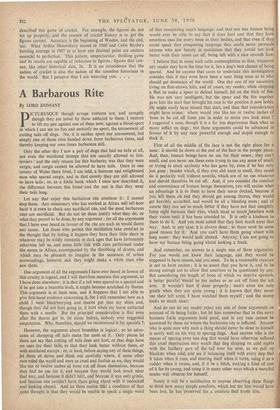 GLOADIBS4he Happy Bourgeois Literary Man, was travail- ing with Ideas, and I saw that he must be rid of them and that I must be the cup into which he must spill that aggregation. I sat in a large leathern armchair and listened. I altered my attitude often to keep myself awake. I practised the dangerous feat of yawning with my mouth, shut ; and, as every medical student knows, this puts a. heavy 'strain on the Circle of Willis at the base of the brain. From time to time my eyes failed to accommodate, and Gigadibs's features became a blur, the features of someone else, unnaturally clear, two sets of features, and then a blur again. His phrases flew at my struggling con- sciousness like lustrous Indian clubs front the hand of a juggler. Some I caught. Some I dropped. A few I returned. It did not seem to matter to him.

Some time ago (said Gigadibs) I sent my son, Cornelius, to a Scottish public school, and on Saturday. I took the train to Edin- burgh to see him play cricket. The role of all roles I dislike most (said Gigadibs) is that of Parent at my children's schools. Ordinary human dignity is impossible to a Parent. He is matter out of place. On the other hand, I like cricket. Precisely the same people who find cricket a dull game are those who find wars are dull wars, and are forever clamouring , for this or that action-

without the knowledge or capacity to consider either the means or the cost.

It is not simply that n cricket match is a beautiful sight. Green and white make always a satisfying combination. A tree against a white gable is hard to surpass in nature or in art as a giver of content The white figures on the green field run the tree very close. And their movement is so leisurely graceful that the eye and the mind can comprehend the picture and rejoice in it. But it is childish to exult in delightful objects at a moment when the beasts of the jungle are ravening over the temples. It is fiddling when Rome burns . . . and, by the way, what an excellent thing to do if one is not a fireman. I think very little of music as a mode of human expression, but I would willingly pay my shilling if some imaginative composer would give us Nero's Violin Concerto.

No, but honestly (said Gigadibs), if you consider cricket seriously, as the English do—and the English have only one recognisable characteristic, that they are always right—you will realise several things. When I.got to the field, it was the second day of,a ,two- day match. On the first day, the Blue, for which my son was playing, had won the toss, gone in and made a hundred and eighty runs. Of these, my son, who found his place in the eleven in his capacity of spin bowler, had made six not out. The Pink, who had won this match every year for sixteen years, had suffered a minor collapse in the tricky light, and had lot four wickets for twenty or so runs. On the Saturday, after, no doubt, a sleepless eleven nights, the Pink added another seventy-five runs. Three deliveries from my son, creeping through the chill air and rising from the pitch at unexpected angles, had disposed of the last three batsmen in one over.

All this had happened before my arrival. At that point about four and a half hours' play remained, and the Blue had begun their second innings. I sat down on a deck-chair beside my wife, my younger son (who cared for none of these things) and the daughter of a schoolmaster (a class of creature for which the fauteuils of Heaven are unconditionally reserved). The Blue captain had decided to send his hitters in first, with the idea of adding to his already substantial lead and then grinding the Pink to powder at his leisure. My cricketing son, " thin unspeakably," with his pipe-clayed boots covered with mud and his shirt open to the, umbilicus, joined us, and we watched the drama in silence, broken only by my damnable, Well hit, Sir," which came, from time to time, unbidden.

In the game of cricket the side which scores the larger number of notches or runs and, at the same time, captures all the wickets of the opposing side, is held to have won the game. All through the game the bowlers and the scouts or fielders contend with the opposing batsmen, attempting to cajole them into throwing away the precious wicket or to capture it by terrorisation and force. It is the aim of the bowler to project the ball in such a fashion that it falls in the place most difficult for the batsman to strike it hard with his bat ; to grip it With his hand cunningly at the moment of projection so that it spins peculiarly from the sward ; to project it at such a pace that the batsman is less concerned to score notches than to protect his shrinking torso and limbs from its impact. The scouts stand ready to pounce on the boundary- bound ball or, haply, to gather it before it reaches the ground and send the batsman crestfallen to the pavilion. And through it all the Recording Angel, the scorer, marks down the notches that are the currency of victory or defeat.

Consider. In this match there were probably upwards of four hundred balls bowled. Each of them was a little battle. The scouts were placed within a square yard of the spot most dangerous to the defender of the wicket. The bowler was bent on terrorisa- tion or deceit. The wicket-keeper,, squatting like a demon, awaited

the moment when the defender would step IM inch beyond the confines of his fortress. Through the malignant net spread by eleven implacable enemies• the batsman had to find pathways for, his notches, without which he could not hope to win the match. If he were reckless and daring ; if he thought more of possible notches than of the defence of his precious wicket ; if hi failed to train his eye and mind to meet the wiles of the attack ;* ha was a lost man. So it happened with the Blues.

Hitter after hitter, padded and gloved, advanced to the attack. After one swift, wary glance to square leg, he took centre and limbered himself to knock the leather cover off that ignominy- dealing missile. Hitter after hitter returned to his but discomfited. The dreadful McGallowglass, captain of the Pink, was making the ball dance on the pitch like a live thing. Fortunate, then, was it for the Blue that the gigantic McGog was one of their number. The fellow was nine feet high. One hoped to see him lift that dismal ball over the Braid Hills and win the match by a heart- stirring succession of sixes. But that was not his humour.

It is known that the giraffe takes some time to convey his activating thought from his brain, the seat of his reason, to his midriff, the seat of his emotions. So it was with McGog. As the ball travelled down the pitch one could see him conceiving, reject- ing, re-conceiving and deliberately carrying out his course of action. Yet each time the bat met the ball, and, by ones and by twos, the score mounted till the level of disgrace was passed. McGog's partners came and went. Among them was my son. He cocked up his second ball from McGallowglass, there was a swift scramble among the close-packed in-field, and back he came for a blob. The innings finished for seventy runs, of which McGog had made forty, and the Pink had a hundred and sixty runs to make in two hours and a half.

Well, G. L. Jessop, in such a situation, used to make a century in an hour and win the game off his own bat. I don't know one wicket from another, but it didn't look as if the Croucher himself would make it on that wicket, with the-rain falling and the parents gathering up their tartan rugs and making for the pavilion—whersi they had no business, no business at all.

The rain came on and went off, and lifeless wood met lifeless leather, and the little boys with the tin • numbers outside the scorer's box yawned and fidgeted, and it looked like a draw. Furious red-headed bowlers galloped up the pitch and delivered unsophisticated balls which were ignored or heavily blocked. My son came on first change, and bowled high-flighted balls with a peculiar casual sort of little skip before the ball left his hand. Most of them hit the batsman gently on the pads or on the body, and only occasionally the scouts screamed harshly, " How's that ? not too hopefully, and the umpire replied with an almost imper., ceptible shake of the head. Nobody was getting runs. Nobody was getting out. A soft drizzle was falling. " Always afternoon," and a Glasgow Fair afternoon at that. The fielding was still keen, but all that meant was that the odd, enlivening run did not go up on the telegraph. A phoney war.

Then a slip snatched a ball off an unenterprising bat, and McGallowglass came in and cracked a sleepy, ball from my .scin past coverpoint. Rommel had changed his tactics. The score began to climb. My disturbed son threw a foolish full pitch and then another, and away they went to the leg boundary. At a little' after half-past six I withdrew my non-combatant family from the• field. The Pink score was a hundred and ten for six wickets ; McGallowglass had made his fifty to genteel applause and was treating the right Vail with no mercy. There were forty runs to make and an hour to make them in. The dull draw had become a certain win for the Pink. There was nothing for it but to staunch our bleeding hearts in the North British Grill and catch the train back to unromantic Glasgow.

In case you want to know what happened after that, McGallow- glass was out with his score at sixty-two ; Cornelius took the last wicket at seven minutes from time, and the Blue won (for the first time in sixteen years) by a dozen runs. I have not very well described this game of cricket. For example, the figures do not tot tip properly, and the essence of cricket history is to get the tgures correct. Accuracy is the beginning of Wisden, and the end, too. What Arthur Shrewsbury scored in 1900 and Colin Blythe's bowling average in 1907 to at least one decimal point are matters essential to perfection. This patient, unspectacular, thrilling game and its results are capable of reduction to figures ; figures that 'can- not, like other historical data, lie. It is no coincidence that the nation of cricket is also the nation of the soundest historians in the world. But I perceive that I am wearying you. . . ,