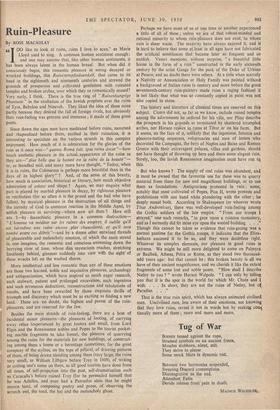 DO like to look at ruins, ruins I love to scan," as Marie Lloyd used to sing. A common human sentiment enough: and one may assume that, like other human sentiments, it has been always latent in the human breast. But when did it consciously begin, this romantic pleasure in seeing decayed or wrecked buildings, this Ruinenempfindsamkeit, that came to its head in the eighteenth and nineteenth centuries and strewed the grounds of prosperous and cultivated gentlemen with ruinated temples and broken arches, over which they so romantically mused? Very early, I think. There is the true ring of "Ruinenhungrige Phantasie" in the exultation of the Jewish prophets over the ruins of Tyre, Babylon and Nineveh. They liked the idea of these ruins partly because they desired the fall of foreign rivals, but obviously their ruin-feeling was genuine and immense ; it made of them great poets.

Since down the ages men have meditated before ruins, mourned and rhapsodised before them, exulted in their ruination, it is interesting to speculate on the various strands in this complex enjoyment. How much of it is admiration for the glories of the ruin as it once was—" quanta Roma full, ipsa ruina docet "—how much aesthetic pleasure in the actual appearance of the ruins as they are—" plus belle que la beanie est la ruine de la beaute"— or, as Stendhal said, and many more have thought, " Today, when it is in ruins, the Colosseum is perhaps more beautiful than in the days of its highest glory " ? And, of the sense of this beauty, how much is association, historical or literary, how much objective admiration of colour and shape ? Again, we may enquire what part is played by morbid pleasure in decay, by righteous pleasure in retribution (for so often it is the proud and the bad who have fallen), by mystical pleasure in the destruction of all things and the eternity of God (a common reaction in the Middle Ages), by selfish pleasure in surviving—where now art thou ? Here still am 1—by inasochistic pleasure in a common destruction- " L./Ion/me va mediter sur les ruines des empires, it oublie qu'il est lui-meme une ruine encore plus chancelante, et qu'il sera tombe avant ces debris"—and by a dozen other entwined threads of pleasurable and melancholy emotion, of which the main strand is, one imagines, the romantic and conscious swimming down the hurrying river of time, whose dim mysterious reaches, stretching limitlessly behind, glimmer suddenly into view with the sight of these wracks left on the washed shores.

More intellectual and less romantic than any of these emotions are those two learned, noble and inquisitive pleasures, archaeology and antiquarianism, which have inspired so much eager research, such stalwart, patient and prolonged excavation, such ingenious and such erroneous deductions, reconstructions and tabulations of results, and have been rewarded by those exquisite thrills of triumph and discovery which must be as exciting as finding a new land. These are no doubt, the highest and purest of the ruin- pleasures, and are reserved for the few. , Besides the main strands of ruin-feeling, there are a host of incidental minor pleasures—the pleasures of looting, of carrying away relics (experienced by great looters and small, from Lord Elgin and the Renaissance nobles and Popes to the tourist pocket- ing marble fragments to take home), the pleasure of quarrying among the ruins for the materials for new buildings, of construct- ing among them a home or a hermitage (sometimes, for the great company of the stylites, on the tops of pillars), of drawing pictures of them, of being drawn standing among them (very large, the ruins very small, as William Lithgow before Troy in 1609), of writing or cutting one's name on them, as all good tourists have done from all times, of self-projection into the past, self-dramatisation such as Caracalla's before ruined Troy (for he persuaded himself that he was Achilles, and even had a Patroclus slain that he might mourn him), of composing poetry and prose, of observing the screech owl, the toad, the bat and the melancholy ghost.

Perhaps we have most of us at one time or another experienced a little of all of these ; unless we are of that robust-minded and rational minority to whom ruin-pleasure does not exist, to whom ruin is sheer waste. The majority have always enjoyed it, and it is hard to believe that some at least in all ages have not fabricated the artificial semblances that became later so frequent and so modish. Vasari mentions, without surprise, " a beautiful little house in the form of a ruin " constructed in the early sixteenth century by the artist Genga for the park of the Duke of Urbino at Pesaro, and no doubt there were others. At a time when scarcely a Nativity or Annunciation or Holy Family was painted without a background of Italian ruins (a century and more before the great seventeenth-century ruin-painters made ruins a raging fashion) it is not likely that what was so constantly copied in paint was not, also copied in stone.

The history and literature of classical times are reserved on this subject. Cicero did not, so far as we know, include ruined temples among the adornments he ordered for his villa, nor Pliny describe the prospects in his gr9unds as terminated by shattered triumphal arches, nor Horace rejdiice in ruins at Tibur or on his farm. But it seems, on the face of it, unlikely that the ingenious, fatuous and pleasure-tasting emperors, voluptuaries and men of letters who decorated the Campagna, the bays of Naples and Baiae and Roman Greece with their extravagant palaces, villas and gardens, should not have thought of throwing up here and there some elegant ruin. Surely, too, the lavish Renaissance imagination must have run to, this.

But who knows ? The supply of real ruins was abundant, and it must be owned that the favourite use for these was to quarry material from them for new and magnificent buildings, or to use them as foundations. Antiquarians protested in vain ; some, notably that most cultivated of Popes, Pius II, wrote protests and prohibitions with one hand while plundering with the other ; ho deeply meant both. According to Shakespeare (or whoever wrote Titus Andronicus), there was well-developed ruin-feeling among the Gothic soldiers of the late empire. " From our troops I strayed," one such remarks, " to gaze upon a ruinous monastery, and as I earnestly did fix mine eye upon the wasted building. . . ." Though this cannot be taken as evidence that ruin-gazing was a normal pastime for the Gothic troops, it indicates that the Eliza. bethans assumed it to be so, and they were doubtless right. Whatever its complex elements, our pleasure in good ruins is extreme. We might be still more delighted to come on Palmyra or Baalbek, Athens, Petra or Rome, as they stood two thousand- odd years ago: but that cannot be ; this broken beauty is all we have of their ancient magnificence, and we cherish it like the extant fragments of some lost and noble poem. " How shall I describe Netley to you ? " wrote Horace Walpole. " I can only by telling you that it is the spot in the world for which Mr. Chute and I wish. . . . In short, they are not the ruins of Netley, but of, Paradise. . . ."

That is the true ruin spirit, which has always animated civilised men. Uncivilised men, less aware of their emotions, not knowing that they love ruins, reveal it not in words but by making coal tinually more of them ; more and more and more.