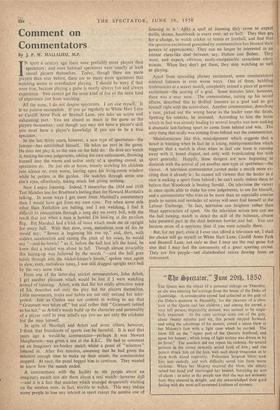 THE Queen was the object of a personal outrage on Thursday, as she was entering her carriage from the house of the Duke of Cambridge. A considerable crowd had collected at the gate of the Duke's mansion in Piccadilly, for the pleasure of a' close look at the Queen and her children ; and among the crowd, a very tall person, respectably dressed, was noticed to be singu- larly expectant. As the open carriage aime out of the gate, about twenty minutes past six, this person stepped forward, and using the advantage of his stature, aimed a smart blow at her Majesty's face with a light cane which he carried. The blow fell on the " upper part of the Queen's, forehead, and upon her bonnet ; which being of light texture was driven in by its force." The assailant did not repeat his violence, for several persons in the crowd instantly seized hold of him ; and one person struck him on the face., with such sharp vengeance as to draw forth blood copiously. Policeman Sergeant Silver took him into custody, and with difficulty saved him from worse violence. When her Majesty received the blow, she simply raised her hand and rearranged her bonnet, betraying no sort of alarm : as soon as the people saw that she was not seriously hurl, they cheered in delight, and she acknowledged their good feeling with the most self-possessed kindness of manner.