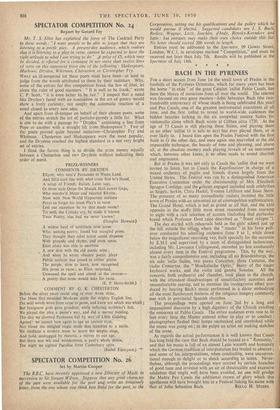 The B.B.C. have recently appointed a new,Director of Music in 'accession to Sir Steuart Wilson. Suppose that any great character of the past were available for the post and write an imaginal-Y. letter, from the one whom you think best fitted for the post, to the Corporation, setting out his qualifications and the policy which he would pursue if elected.Suggested candidates are J. S. Bach, Berlioz, Wagner, Liszt, Joachim, d'Indy, Binzsky-Korsakov and Satie ; but entrants may make their own choice outside this list. No letter should exceed 200 words in length.

Entries must be addressed to. the Spectator, 99 Gower Street, London, W.C.1, in envelopes marked " Competition," and must be received not later than July 7th. Results will be published in the Spectator of July 14th.